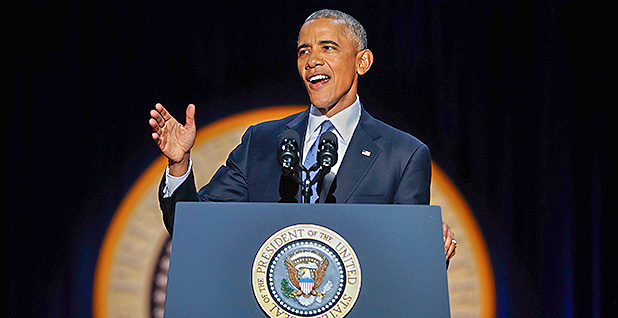 A hopeful President Obama delivered his farewell address to America last night, making a final plea for democratic engagement and fact-based debate, including on climate change.

Speaking from Chicago, Obama urged restoring a "common purpose" and "basic sense of solidarity" in an increasingly politically divided country.

Obama struck an optimistic note, offering his pitch for unity above partisanship just 10 days before President-elect Donald Trump will take office and begin to carry out promises to rescind as much as possible of his predecessor’s legacy.

As people across the United States were tuning in to the late evening speech, a news story was still developing that intelligence officials have briefed Obama and Trump with unsubstantiated reports that Russia collected compromising personal information about Trump. In a stark contrast to Obama’s message, Trump took to Twitter in all caps to decry the situation as a "TOTAL POLITICAL WITCH HUNT."

Obama avoided mentioning the incoming president, aside from reiterating that he will try to make the transition as smooth as possible.

He highlighted his own economic and policy achievements, including his signature health care law, which Republicans in Congress are gearing up to repeal. At the same time, Obama acknowledged stark inequality between the nation’s richest "1 percent" and the lower-income earners.

"The laid-off factory worker, the waitress or health care worker who’s just barely getting by and struggling to pay the bills, convinced that the game is that fixed against them, that the government only serves the interest of the powerful — that’s a recipe for more cynicism and polarization in our politics," he said.

Obama called upon Americans not to retreat into their own political "bubbles."

"Increasingly, we become so secure in our bubbles that we start accepting only information, whether it’s true or not, that fits our opinions instead of basing our opinions on the evidence that is out there," Obama said, calling the trend a "threat" to democracy.

"Politics is a battle of ideas," he continued. "In the course of a healthy debate, we prioritize different goals and the different means of reaching them. But without some common baseline of facts, without a willingness to admit new information and concede that your opponent might be making a fair point and that science and reason matter, then we’re going to keep talking past each other."

A plea for ‘bolder action’ on climate

On energy policy, Obama noted that the United States halved its dependence on foreign oil and doubled its renewable power in the last eight years. He touted the Paris climate deal, which his administration helped negotiate among nearly 200 nations, but he acknowledged that it won’t be enough to limit the worst impacts of global warming.

"We’ve led the world to an agreement that has the promise to save this planet," Obama said. "But without bolder action, our children won’t have time to debate the existence of climate change. They’ll be busy dealing with its effects. More environmental disasters, more economic disruptions. Waves of climate refugees seeking sanctuary.

Trump, who has denied that humans are causing climate change, has vowed to exit the Paris Agreement. A minority of moderate Republicans accept the scientific consensus but say they disagree with the way Obama has moved to curb emissions.

"I actually agree that we should debate the solutions, but I’m not sure if [Obama] understands what that means," said David Banks, a climate adviser in the George W. Bush administration.

He said the Clean Power Plan, a regulation to limit power-sector carbon emissions, harms private-sector investment in carbon capture projects by eliminating a future for coal, for example. But carbon capture has seen little private investment as power companies move away from coal and toward cheaper natural gas.

"If we actually had a reasonable discussion on climate solutions, much of the Obama climate agenda couldn’t stand on the merits," Banks said. "Democrats have gotten by with really bad policies, in large part because of the absence of a bipartisan discussion on solutions — what works and what doesn’t."

Alden Meyer, director of strategy and policy for the Union of Concerned Scientists, said Obama’s speech revealed how personal an issue climate change has become for Obama over the years.

That was apparent when Obama weaved climate change into his broader theme of "a need to have rational debate and not a polarized post-truth environment," Meyer said, adding, "He clearly feels some pride and ownership here."

He noted that foreign leaders over the last few years couldn’t go into a meeting with Obama without being ready to talk about climate change and what their country might be able to promise in the way of efforts to reduce greenhouse gas emissions.

Other climate advocates also heaped on the praise. League of Conservation Voters President Gene Karpinski called Obama "the greenest president we’ve ever had." Environment America noted the Paris deal, the Clean Power Plan and the decision to reject the Keystone XL oil pipeline, all of which Trump is likely to undercut.

Meyer, however, said emissions declines from the growth in renewable power will continue, even if Trump reverses some Obama action and eliminates future climate work.

"The real question is what the rate of that progress will be and whether it’s fast enough to keep up with the reactions in the physical climate system," he said.