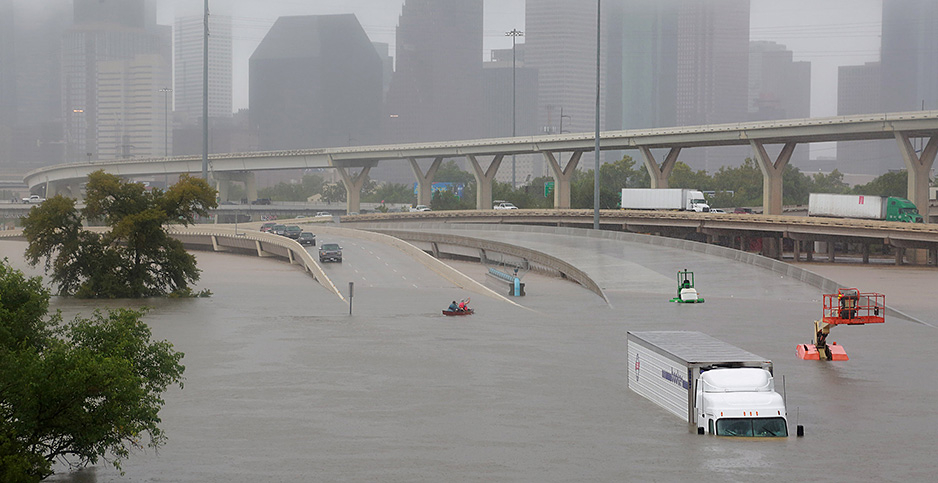 States and municipalities that are suing oil and gas companies over climate change may have a new weapon in court: scientific studies.

But groups tied to the fossil fuel industry are launching a preemptive attack on scientists’ findings before they can be used in the courtroom, where they could help prove the connection between the industry’s planet-warming emissions and climate-fueled disasters, such as hurricanes and wildfires.

At issue is attribution science, a field of research that examines whether — and how much — climate change contributes to extreme weather events.

In recent years, attribution studies have found that human-caused global warming increased drought risk in California, boosted extreme rainfall from Hurricane Harvey and likely doubled the risk of a European heat wave, among other things.

These findings could help bolster the legal claims of local governments that are suing fossil fuel companies over their role in causing climate change and its effects, said Jessica Wentz, a nonresident senior fellow at Columbia Law School’s Sabin Center for Climate Change Law.

"The attribution research can be used by the plaintiffs to really flesh out that causal chain, all the way from the fossil fuel industry’s contributions to climate change to specific injuries that they are now dealing with, such as the effects of sea-level rise on coastal communities and infrastructure," Wentz said.

Groups affiliated with the oil and gas industry, however, have blasted the attribution studies as politically motivated.

The groups have repeatedly argued that the authors of the studies aren’t impartial scientists — rather, they’re climate activists who are biased against the fossil fuel industry.

Take a 2018 blog post by the Manufacturers’ Accountability Project, an initiative of the National Association of Manufacturers, which opposes legal claims that energy companies should be on the hook for climate impacts.

Titled "How Activists Hope to Use Climate Attribution to Take Down Manufacturers," the post questions the motivations of two prominent authors of attribution research: Myles Allen, a climate expert at the University of Oxford, and Peter Frumhoff, chief climate scientist at the Union of Concerned Scientists. The post focused on an E&E News story that was republished in Scientific American (Climatewire, Jan. 2, 2018).

The post notes that Allen has received funding from "several wealthy anti-fossil fuel foundations," including the Rockefeller Brothers Fund, and that both researchers attended a 2012 conference in La Jolla, Calif., where climate activists discussed strategies for suing oil and gas firms.

The National Association of Manufacturers has members in several industries, including the oil and gas sector. A senior vice president at Exxon Mobil Corp., one of the firms targeted in the climate liability litigation, sits on the association’s board of directors.

Phil Goldberg, special counsel for the Manufacturers’ Accountability Project, declined to comment on the blog post, which was published before he joined the initiative in 2019.

In an interview with E&E News, Frumhoff rejected the notion that his work was designed to help local challengers in the climate liability lawsuits.

"I’m interested in doing what might be called actionable science or policy-relevant science," he added. "And the question of fossil fuel companies’ responsibility for climate change is a policy-relevant question, including in the context of the courts of law, that science can inform."

But Friederike Otto, a climate expert at the University of Oxford who has worked with Allen, said her efforts to link extreme weather events to climate change have always been tied to the possibility of legal action.

"Unlike every other branch of climate science or science in general, event attribution was actually originally suggested with the courts in mind," she said.

Otto drew a comparison between the climate liability lawsuits and earlier litigation against major tobacco companies, which relied on science showing the harmful health effects of smoking (Climatewire, March 10).

"You can say that smoking cigarettes increases the likelihood of developing cancer, and you can actually quantify how much, and therefore those who sell tobacco and say it’s wonderful for you are liable," she said. "And this is the same idea behind the event attribution."

Since 2017, five states and more than a dozen municipalities have sued oil and gas companies over their contribution to — and alleged deception about — the dangers of global warming.

The state and local governments allege that the companies misled the public about the harmful effects of burning fossil fuels for decades. The suits contend that the industry should now cover the costs of addressing floods, wildfires and other disasters fueled by rising global temperatures.

So far, most of the climate liability cases have been tied up by procedural wrangling over whether they belong in state or federal court. Federal court is seen as the more favorable venue for industry interests.

The Supreme Court’s upcoming ruling on a narrow issue in one of the climate liability cases, BP PLC v. Mayor and City Council of Baltimore, could help decide the venue question (Climatewire, Feb. 23).

If and when the climate liability cases go to trial, state and local challengers could cite attribution studies as evidence that their injuries were caused or worsened by climate change, said Michael Burger, executive director of Columbia’s Sabin Center.

"I think that if you look at the chain of causation, it’s quite clear that you can trace impacts to climate change. They can be localized impacts, such as sea-level rise in the San Francisco Bay area," Burger said at a recent panel hosted by the Environmental Law Institute.

"I don’t think that there’s any reason at this point to conclude that the science wouldn’t support a judicial finding or a jury’s finding that climate change was the cause of an individual extreme event," said Burger, who cautioned that he was speaking as an individual and not on behalf of Sher Edling LLP, a law firm representing many of the challengers in the climate liability litigation. Burger serves as counsel at the firm.

The states and municipalities suing Big Oil could also draw upon a subset of attribution science called source attribution, which seeks to quantify the greenhouse gas emissions for which a specific company or nation is historically responsible, said Wentz of the Sabin Center.

"To some extent, it’s necessary to link up different attribution studies," she said. "First, you look at source attribution research that ties the defendants’ conduct to increases in global greenhouse gases. And then you look at extreme event studies that tie climate change to the effects of extreme events."

The authors of attribution studies could even be asked to testify on behalf of the state and local challengers in the climate liability cases, Wentz said.

"But I imagine there will be some caution on the part of scientists in terms of taking the stand," she said. "There is, I think, a real concern about being viewed as a legal or political actor rather than a scientific actor."

One of the most well-known examples of source attribution research is the 2013 "Carbon Majors" study by Richard Heede, co-founder and co-director of the Climate Accountability Institute.

The most recent update of Heede’s research found that 20 fossil fuel firms collectively contributed 35% of all energy-related emissions worldwide between 1965 and 2018. The biggest historical emitters were Saudi Arabian Oil Co., Gazprom, Chevron Corp. and Exxon.

An organization affiliated with the fossil fuel industry has critiqued Heede’s work, as well.

Energy in Depth, a news and media site run by the Independent Petroleum Association of America, has published multiple pieces questioning Heede’s objectivity.

In a 2019 Energy in Depth piece titled "Activist Updates Climate Attribution Study to Aid Climate Lawsuits," Spencer Walrath of FTI Consulting criticized Heede’s reliance on Scope 3 emissions, or emissions generated by end users of petroleum products, such as drivers filling up their cars with gasoline.

FTI works with Energy in Depth and counts Exxon among its fossil fuel industry clients.

"Companies cannot accurately track Scope 3 emissions, which is probably why they’re not required to report them," Walrath wrote. "So, when Heede claims to have calculated a company’s total emissions, understand that he’s just making an educated guess, similar to how Drew Carey awarded points on ‘Whose Line Is It Anyway?’"

Asked for comment, William Allison, a spokesman for Energy in Depth and a senior director at FTI, said in a statement to E&E News: "It’s clear that Richard Heede’s attribution research was done for the specific purpose of supporting litigation against energy companies. He’s been funded by the Rockefellers, who have manufactured the entire campaign, and his organization co-hosted the 2012 conference where the playbook for these lawsuits was devised."

Allison added: "In no way should a court of law or policymakers view Heede’s attribution research as a neutral and objective resource."

Frumhoff of the Union of Concerned Scientists defended Heede and his reliance on Scope 3 emissions. "I think the case for fossil fuel companies’ responsibility for Scope 3 emissions is exceptionally strong, especially in light of what they did to sow doubt about those emissions and their harms and to fight regulation to reduce those emissions," he said.

In an interview with E&E News, Heede said he keeps his personal opinions separate from his research.

"I have my opinions. And some of them may be biased against the oil and gas industry. That does not mean that I do not do objective, careful, conservative work," Heede said.

"There has been no scientific objection to my work — not from the companies themselves or from Energy in Depth," he said.

"If any oil company wishes to dispute the results," he added, "I’m happy to hear it."