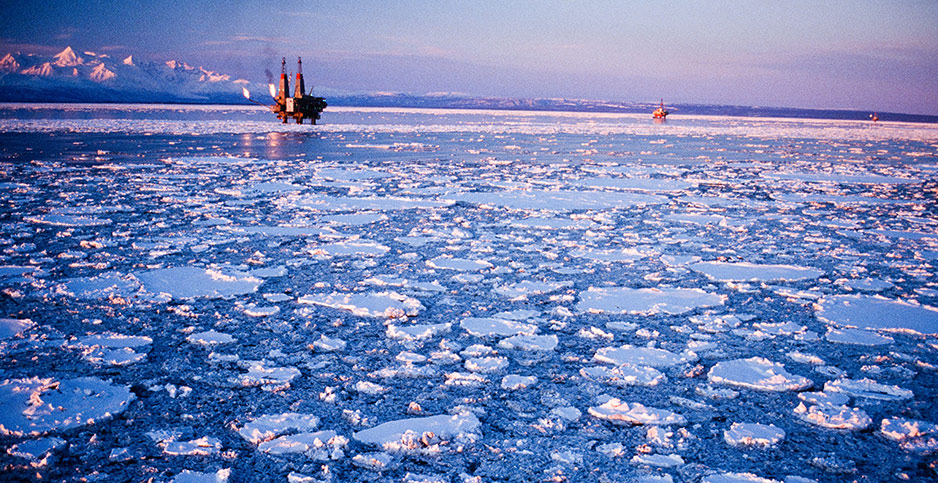 Energy companies and the government could face increased liability as scientists get better at attributing specific disasters to climate change. Exploratory oil rigs are pictured in Alaska. Bureau of Safety and Environmental Enforcement/Flickr

Last month, temperatures in Europe skyrocketed above 100 degrees Fahrenheit, causing multiple deaths in what was deemed the hottest June on record.

Researchers at the World Weather Attribution project said climate change was a culprit behind the intensity of the heat wave — an event that data suggests is 10 times more likely to occur today than a century ago.

That study stems from a branch of science called extreme event attribution — a discipline that models how human-caused climate change affects the severity and likelihood of severe weather.

And there’s a good chance this type of climate science will start popping up in courtrooms around the world grappling with climate cases.

"Extreme event attribution is a sturdy branch of climate science," said Peter Frumhoff, director of science and policy at the Union of Concerned Scientists. "It’s been developed over the past 15 years or so and is now widely used and applicable to be able to ask questions about the contribution of climate change to extreme events."

When it comes to the multiple climate cases running through international courts right now — from constitutional cases against government to lawsuits against Big Oil — experts say different branches of attribution science could play an evidentiary role. One branch, for instance, may be able to help litigants show fossil fuel companies are responsible for climate damages.

Friederike Otto, a climate expert at the University of Oxford and lead scientist at the World Weather Attribution project, said she talks "a lot with lawyers" about how attribution science could be used as a litigation tool.

She noted she’ll be attending a conference in Scotland in the fall where lawyers and judges will gather to discuss "what needs to happen in terms of the law and the science coming together so that we can use this in a better way in litigation."

Attributing specific weather events to harmful greenhouse gas emissions in a court of law was famously postured by Myles Allen, another climate expert at Oxford. In 2003, he wrote an op-ed about whether one could sue certain actors for damages wrought by global warming.

"Who to sue when the house price falls?" he asked as he watched a severely flooded Thames River lap at the unwilling shores of his front doorstep (Climatewire, Jan. 2, 2018).

Allen and his colleagues authored what is widely considered the first attribution study on the 2003 European heat wave.

A separate study last week linked climate change to the increased drying out of soil and vegetation in California, which in turn increased the likelihood of the severe fires that ravaged the state over the last two years. And multiple studies post-Hurricane Harvey looked at how human-caused climate change likely pushed the storm’s rainfall to unprecedented levels.

Michael Burger, executive director of Columbia University’s Sabin Center for Climate Change Law, said the so-called kids’ climate case provides a "preview" of how different types of attribution science would play out in the courtroom.

In Juliana v. United States, 21 youth plaintiffs are suing the government over the right to a safe, livable climate. Burger said expert reports "filed in anticipation of a trial" demonstrated how attribution science could help answer the lawsuit’s central issues of how many emissions can be traced to the U.S. government and whether climate change could be attributed to the plaintiff’s specific harms.

"The extreme event or climate attribution science is a necessary step in demonstrating the connection between climate change and the injuries," Burger said. "That’s what those studies show, they show that climate change caused the harm."

Burger and co-authors Radley Horton and Jessica Wentz of Columbia University explored attribution science and its use in litigation in a massive paper published earlier this year.

The April study details six key ways in which science that links humans to damage-causing climate change has already made its way into litigation. They include helping establish standing to sue greenhouse gas emitters for climate harms, challenging the failure to regulate emissions and bringing lawsuits surrounding insufficient risk disclosures.

Both Burger and Frumhoff drew a distinction between extreme event attribution and what they call "source attribution."

"They would be presumably treated differently in the courtroom. They’re appropriate to answer different questions," Frumhoff said.

Source attribution stems from 2014 research conducted by Richard Heede, which found that 63% of worldwide greenhouse gas emissions could be traced back to 90 international fossil fuel companies — nicknamed "carbon majors."

Burger said tracing emissions to the U.S. government is a necessary part of Juliana — one that could be influenced by this science.

Similarly, according to Frumhoff, municipalities bringing cases against Big Oil over climate damages could look to the science to ascertain to what extent emissions from companies contribute to things like sea-level rise.

"We can now — just as we can with nations — divvy up the global pie of atmospheric changes in climate to sources from fossil fuel companies," Frumhoff said.

But while the methodologies of attribution science are solid, Frumhoff said that companies could try to dispute their responsibilities as tobacco firms did to combat their own damage litigation.

"We’re already beginning to see some language about companies saying they don’t have responsibility for those emissions, that’s really customer emissions — which is very much like what tobacco companies did," Frumhoff said. "I think that’s an illegitimate argument. But I think it’s one that we might anticipate."

But until the myriad climate cases — like the suits from U.S. municipalities — make it past the jurisdictional stage, source attribution is unlikely to get any major test in the courtroom.

Ultimately, Burger said courts will be home to a "battle of the experts" if attribution science is called forth by name in climate trials.

"The plaintiffs present their scientists, and the defendants present theirs, and they have different methodologies and they arrive at different conclusions," Burger said. "And the judge or jury will be charged with deciding who’s made the better case."

While few experts will point fingers at climate change as the undisputed sole cause of extreme events — attribution science is probabilistic, not deterministic — research shows that global warming is contributing to the frequency and severity of events that are causing worldwide damage.

And legal disputes loom as more plaintiffs turn to the courts for climate action.

Lindene Patton, an attorney with the Earth & Water Law Group, said this science could factor into disputes over whether actors fail to live up to their duty of care not to harm others in the face of climate change risk.

In a 2018 paper, Patton and environmental lawyer Sophie Marjanac wrote that the next wave of climate litigation is not a matter of "if" but "when."

Claims could arise, Patton said, in which attribution science is used to prove certain risks were foreseeable. If actors fail to disclose knowledge of potential foreseeable damage or adapt to the risks, Patton noted that that may be where they’ll get into trouble.

Courts are already beginning to hear these types of liability cases. The Conservation Law Foundation has sued Exxon Mobil Corp. for not adapting its storage terminal in Everett, Mass., to protect against climate threats that could cause harmful oil spills. And shareholders are taking Exxon to task for allegedly not accurately reporting how the company is prepared to handle climate change risks.

"When you get to the point in a court of law where you’re talking about what they did versus what they should have done, that’s where the attribution science becomes relevant," she said.

Potential case in point: class-action lawsuits against the Army Corps of Engineers over its response to Hurricane Harvey.

Hundreds of petitioners turned to the U.S. Court of Federal Claims after severe rainfall pushed the Army Corps to flood the Addicks and Barker reservoirs outside Houston. More than 1,000 people who had homes in the area sued the government for unlawfully seizing their property under the Fifth Amendment’s "takings clause."

While the case never mentioned climate change specifically, the families’ attorney said it was in the background (Climatewire, May 28).

In these cases, the government isn’t traditionally held liable for action it did not take. But Patton said there is "going to be a big discussion about whether the Army Corps is accountable" for liabilities it may have created in the face of climate risk.

"That’s the point of being a professional, you have to exercise professional judgment about that. But when you’re doing it, you’ll be evaluated in a court of law if it goes wrong, to determine what your peers think about the decision you made in light of your training and the data that was available," Patton said.

"And that’s where the attribution science becomes relevant."