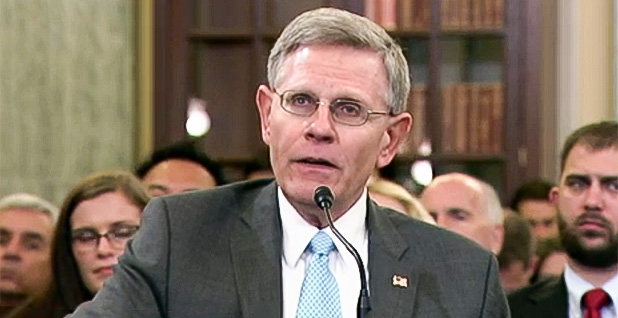 Kelvin Droegemeier, the president’s nominee to head the Office of Science and Technology Policy, during his confirmation hearing. Senate Commerce, Science and Transportation Committee

President Trump’s pick to lead the White House science office told senators this morning that science should be free of political influence and said he was "very excited" to work on addressing climate change.

Appearing before the Senate Commerce, Science and Transportation Committee, Kelvin Droegemeier, the president’s choice for director of the Office of Science and Technology Policy, was asked about a recent New York Times article looking at the history of climate policy. Sen. Tom Udall (D-N.M.) pressed Droegemeier if he would dedicate himself to the issue.

"Absolutely. I’m very excited to work on that. I think we need improvements in climate models. We need lots of things going forward, lots of things we can do," Droegemeier said, adding he enjoyed reading the article.

The nominee pointed to private conversations with a senator before the hearing about how communities do not rebuild for the future after extreme weather.

"That’s a great example senator of the things we need to be better," Droegemeier said. He added that "risk and resilience" were areas he wanted to focus on.

Sen. Ed Markey (D-Mass.) then asked Droegemeier whether he would protect scientists backing the consensus that humans are the driver of warming temperatures, so they are free from intimidation.

Droegemeier’s views on climate change have been under scrutiny ever since the president picked him to lead the White House science office, considering proposed budget cutbacks to climate programs and earlier comments by Trump about global warming being a Chinese "hoax."

Prior to the hearing, Droegemeier had expressed belief in human-driven climate change, but it was unclear how he might respond to direct questions on the issue.

With climate modeling, "we need to reduce uncertainty," he said, adding that he sees a symbiosis between weather and climate research.

The Oklahoma extreme-weather expert did not mention climate change in his opening remarks, and generally avoided the phrase, but emphasized the need to reduce "unnecessary regulatory burdens" for researchers and ensure the U.S. stays ahead in the global science and technology race.

"China has the wealth and expressed desire to challenge our longstanding leadership. We must recognize that challenge, but we must also embrace the value of collaboration," he said.

Droegemeier outlined three areas he would focus on if confirmed, including a "comprehensive portfolio" of initiatives across the government that include commercially risky projects and applied research downstream.

In the past, Droegemeier split sharply with administration officials in calling for increased science and research spending and supporting a report that called for the creation of the Advanced Research Projects Agency-Energy, which Trump has proposed eliminating.

At the hearing, he said that "we’ve got to watch those dollars" because other countries "are on our heels."

The nominee said he would focus on science education and new models of private-public partnerships with academia to help move research out of the lab.

Droegemeier previously was nominated by both Presidents George W. Bush and Obama to serve on the National Science Board and worked in the Cabinet of Oklahoma Gov. Mary Fallin (R) as secretary of science and technology (E&E Daily, Aug. 1).

"I think a lot of us on this committee are going to be happy that you are the White House science adviser," Nelson said.

Inhofe called him a celebrity who has saved "so many lives" in Oklahoma with his work on predicting extreme weather. "He knows science, he knows business," Inhofe said.

Trump waited longer than any modern president in nominating someone to lead OSTP. It’s unclear whether the White House intends to follow previous administration in designating the OSTP director as an "assistant to the president" with more direct access to Trump’s senior aides.

The office is less than half the size it was during the peak of the Obama administration, and last year multiple climate jobs were eliminated (Greenwire, Aug. 4, 2017). The administration, however, has pushed for new initiatives on space policy, artificial intelligence and nuclear power.