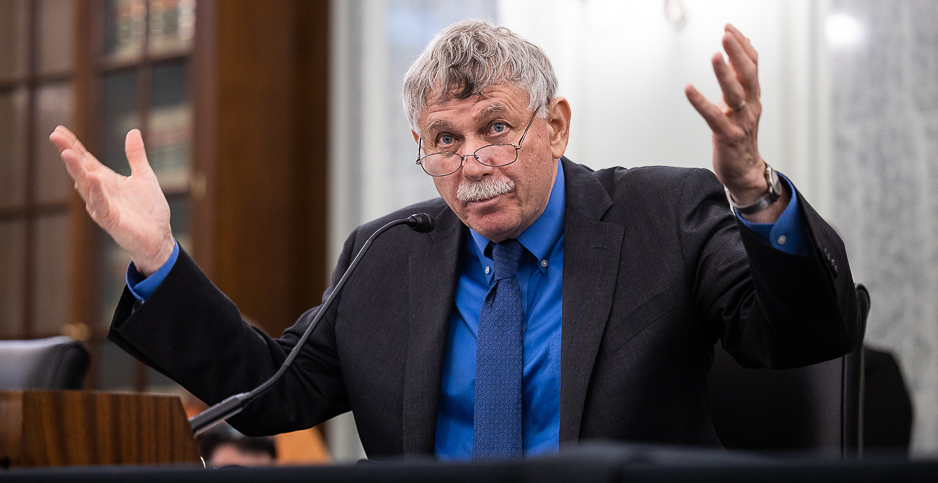 Eric Lander, a prominent biologist and nominee to lead the White House Office of Science and Technology Policy, during his confirmation hearing. Francis Chung/E&E News

At a Senate confirmation hearing yesterday, President Biden’s pick for top science adviser continued to dismiss reports that he had been involved with Jeffrey Epstein, indicating again that his foundation received no money from Epstein and that he only had two brief encounters with the late accused sex trafficker.

The nomination of Eric Lander to run the White House Office of Science and Technology Policy has been a bumpy one as questions were raised about the renowned geneticist’s relationship with Epstein, who was accused of sex trafficking.

Biden has elevated the post to be part of his 23-member Cabinet, and, if confirmed, Lander would be the final member to get a seat at the executive table.

Sen. Tammy Duckworth (D-Illinois), who filled in for Sen. Maria Cantwell (D-Wash.), chairwoman of the Senate Commerce, Science and Transportation Committee, called Lander’s actions "failures" and added: "I strongly encourage you to use this hearing to display how you have learned from your past mistakes."

For his part, Lander described Epstein as "an abhorrent individual" and said he sympathized with his victims. Authorities said Epstein committed suicide in jail. Lander said he never requested nor received funds from Epstein or his foundations. He agreed to release 10 years of donations records from the Broad Institute, the research center he runs.

"The sum total of my interactions was that I met him briefly at two events within the span of three weeks in the spring of 2012," he said. "I did not know about his sordid history before that point. As soon as I learned about it, I had nothing to do with him thereafter."

But the discussion over past indiscretions didn’t end there. Lander also acknowledged allegations of sexism. He said that in a long letter he wrote championing the work of a dozen scientists, he inadvertently undervalued the work of two female scientists.

"That was not my intention," he said. "I felt terrible about it. I made a mistake, and when I make a mistake, I own it and try to do better. I should have written those paragraphs differently to make my intention crystal clear."

Coming to Lander’s defense was Sen. Elizabeth Warren (D-Mass.), who said she had known the scientist for a decade. She accentuated his efforts to hire and promote women at the Broad Institute, a Harvard University and Massachusetts Institute of Technology biomedical research center that he founded in 2004. During the pandemic, she said, Lander established in-house child care to ensure the women scientists who worked for him were not unfairly disadvantaged.

Moreover, she asserted that "Eric is fun" and "he makes things happen."

The rest of the hearing focused on academic topics, including fending off the next pandemic. As Lander described it, the world will always face emerging infectious diseases — the challenge is stopping the spread much faster.

"We have to make sure they never turn into pandemics," he said. "I think we have to set very bold goals. It was great that we made and distributed a vaccine in a year. We have to do better."

The time frame, he said, should be 100 days. He later noted the U.S. government had invested for 10 years in studying coronaviruses, "and when it came time we had things on the shelf."

On other diseases like Alzheimer’s and cancer — which Biden vowed to try to eradicate in his joint address this week — Lander said government investment has helped scientists understand "under the hood."

"We could give you an account of symptoms, but we couldn’t give you an account of what was actually wrong," he said. "I think the federal government’s investment … are now telling us how these diseases actually work — which ones are going wrong, which ones to target." He added that the U.S. is not seizing all opportunities due to a lack of funding.

Asked more generally about climate change, Lander said the focus should be on making technologies more efficient — so "we reach a point where it’s not really a question because it’s cheaper to do it that way."

"I think that’s the ultimate goal for science and technology," he said.