Science rally is political but not partisan 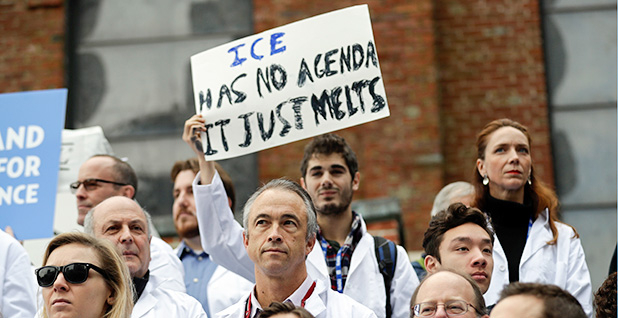 Scientists hit the streets tomorrow to protest what they describe as the Trump administration's disregard for scientific consensus. Researchers, seen here in December, rallied against potential attacks on climate research. Photo by Marcio Jose Sanchez, courtesy of AP Images.

Thousands of scientists, many in white lab coats, will crowd around the Washington Monument tomorrow to defend their research against what they say is a threatening White House with an agenda that endangers the scientific process.

They’ll be joined by colleagues and supporters in about 500 locations around the world to argue that funding research is a basic function of government and that science is essential for crafting policy. And while some in the crowd will be wearing T-shirts that read, "Make America Smart Again" and "STEMinist," the organizers of the March for Science have strenuously avoided any attempts to label the event as partisan warfare. They don’t want it to be seen as another Washington battle that can be easily dismissed by those who feel it is nothing more than an assault on their political beliefs.

More than 200 scientific organizations are supporting the march, including many groups that scrupulously avoid political fights, said Rush Holt, CEO of the American Association for the Advancement of Science and a former Democratic congressman. He said organizers have acknowledged that the march is political, as is any endeavor that criticizes government, but have said it’s not partisan.

Scientists have been concerned for years about what they see as a scaling-back of federal support for research, including under the Obama years, but that worry has grown into outright fear as the Trump administration is proposing billions of dollars in science cuts. Holt said scientists who typically don’t participate in political activity now feel it is necessary because they face a severe devaluing of their work.

"If public officials say that ‘alternative facts’ are the equivalent of facts or that opinion is the equivalent of evidence or that evidence is optional, then scientists feel now it has dawned on some of them that it’s time to speak up," Holt said. "I wouldn’t say it is fundamentally because of Donald Trump, but there is no question there has been concern in recent months about all sorts of things."

Still, climate skeptics are trying to frame the effort as a partisan exercise that seeks to grow government and stifle debate. However it is described, the march looks to some like it is part of the political movement mounted against Trump and conservatives, said Jay Richards, a senior fellow at the conservative Discovery Institute, which has questioned the science behind climate change and evolution.

"The March for Science, at least according to its title, sounds like a laudable goal, but if you look at the actual motives and initial statements that came from the original organizers of the March for Science, many think it seems to be something slightly different, either a march for increased federal funding for ‘Big Science’ or maybe even a particular political partisan ideology," he said.

Science has long been one of the many sources of political fights in Washington. But the very existence of the march suggests it is also a formative moment for the profession. In the last few years alone, climate scientists have discovered an Arctic transforming far more rapidly than many thought possible, record global temperatures and a rapid rise in atmospheric carbon dioxide concentrations from burning fossil fuels.

Nonetheless, the Trump administration has signaled little interest in amplifying the voices of scientists amid those changes. No science adviser has been named, and some of the rumored picks are outliers who break from the vast majority of climate researchers. That’s occurring as the Trump administration seeks to cut climate science funding from U.S. EPA, NASA and the National Oceanic and Atmospheric Administration. Just as troubling to many researchers was when EPA Administrator Scott Pruitt recently overruled his agency’s own scientists in favor of industry voices by allowing the use of an insecticide that’s connected to health problems in children and farmworkers.

Organizers have portrayed tomorrow’s march as the beginning of a movement, and at least one organization will be on hand to recruit more scientists to run for office. More than 90 percent of those marching this weekend are doing so to oppose political attacks on scientific integrity and to encourage public officials to make policies based on scientific facts, according to a University of Delaware poll. The march in Washington will feature a series of teach-ins, including one on how to convince your conservative uncle that climate change is real. Satellite marches will be held in some of the reddest states in the country, including Indiana, Oklahoma and Alabama.

That is unlikely to convince those who see the march as a partisan uprising. In Washington on Wednesday, members of think tanks that drafted a number of policies promoted by the administration sought to frame climate science as a debate and the march as a political exercise. At a Heritage Foundation symposium, a long-held conservative talking point was highlighted: It’s still debatable whether humans are the primary driver of climate change. That’s something few climate scientists would agree with.

Scientists marching in the streets expose how the profession has become dependent on public funding, which is often issued by lawmakers as a reward for supporting their ideological positions, said Marlo Lewis, a senior fellow at the Competitive Enterprise Institute, which has helped shape Trump’s environmental policy.

He said scientists enjoyed a "gravy train" of government funding for decades, and that it now should be shifted into the private sector to prevent it from being corrupted by political ideology.

"Government basically corrupts everything that it embraces, which is why we have separated religion from government, and to the extent that it’s possible, scientific research should similarly be separated from government," he said. "Then you would not find climate science in particular being a faction-ridden, orthodoxy-enforcing political movement, but rather the quest for knowledge."

That sort of rhetoric is why scientists feel they have no choice but to come out in public, even if some of their colleagues say researchers belong in the labs, not the streets. Any public demonstration where participants are critical of government will inevitably face detractors, but that should not stop marchers, said Christine Todd Whitman, a former New Jersey Republican governor and the EPA administrator for George W. Bush.

She said science needs to be a part of crafting policy in Washington, and it’s important that researchers make that clear to the public.

"It’s so important that these voices be heard. They haven’t been heard before in a coherent, cohesive way, and there will be some people who will take it out of context just because it reconfirms prejudices they may have," she said. "The alternative is you don’t say anything, and that’s worse."