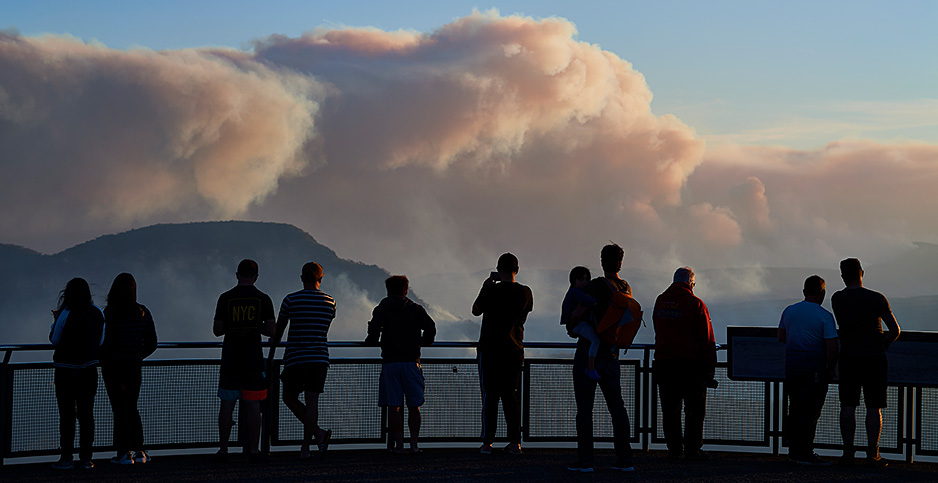 In the winter of 2019-20, climate scientists were blindsided by a phenomenon they had never seen before.

A series of bush fires ignited by lightning had incinerated more than 42 million acres of Australia following three years of record droughts that had dried the nation’s forests and grasses. The size of these megafires was the equivalent of burning the state of Tennessee.

The resulting dark cloud that launched into the atmosphere is estimated to have weighed almost a million metric tons. It included carbon dioxide, smoke and unhealthy small particles and rose 13 miles into the stratosphere. There it began to sprawl over the entire Southern Hemisphere where it absorbed sunlight and warmed the air for six months.

It was the largest wildfire cloud ever measured by satellites.

Karen Rosenlof, part of a team of researchers from NOAA’s Chemical Sciences and Global Monitoring Laboratories who wrote a paper on the cloud, called it a "natural analog" to what could happen if human-made climate emissions continue to increase.

The reason it blindsided scientists, said Benjamin Sanderson, a climate scientist who wrote a study of the event a year ago, is that conventional climate models are constructed from past weather events. They give us a view from the past but not necessarily an understanding what may be coming in the future.

"At present the inclusion of fire is arguably considered as an afterthought (or not at all) by many Earth system modeling efforts," he added.

In an email, Sanderson, a researcher at CERFACS, a French center that specializes in numerical modeling, warned of the forecasting risk of relying on past weather events or the fires that resulted from them. "Hence the more we get surprises," Sanderson said.

Charles Bardeen, a research scientist with the National Center for Atmospheric Research, says that scientists will have to draw some future comparisons from larger and more dangerous phenomena. They include clouds caused by volcanic eruptions and even calculating nuclear war damage scenarios to get more accurate expectations of climate change-caused events that are now or may become possible.

In an interview, he noted that the volcanic eruption of Mount Pinatubo in the Philippines in June 1991 was at least 10 times larger than the Australian bush fires. It dislocated more than 200,000 people and created a cloud that circled the Earth, reducing average temperatures for three years.

The next higher possible human-made event, he noted, would be a "small" nuclear war. A recent study describing the potential outcomes of a nuclear exchange between India and neighboring Pakistan, he pointed out, predicted a cloud from burning cities and other debris that might last between five and 15 years and cause global climate change.

To develop still wider views of potential climate-changing events, scientists are working on studies of scenarios describing larger nuclear wars. They are followed by what scientists call "nuclear winter": clouds whose shadows are so dark and long-lived that they prevent agriculture in future years.

The largest known cloud-causing event, Bardeen noted, was an asteroid that struck the Earth 66 million years ago. Scientists estimate that the gases and heat from its fiery entry into the atmosphere and then its plunge into the ocean set most of the Earth’s vegetation on fire.

The resulting long-lived cloud and "broiler-like" temperatures are believed to have killed the dinosaurs and most of the world’s larger animals, Bardeen explained.

Other scientists, including a group at Harvard University led by David Keith, have been saying there is a need for more experimentation by creating small, human-made clouds of relatively harmless chemicals such as calcium carbonate in the stratosphere.

In a proposed test called the "stratospheric controlled perturbation experiment" these scientists want to study what is called "geoengineering."

If humanity can’t find a way to limit emissions that cause global warming, this group believes we should see whether — as a last resort — nations might be able to keep the Earth from dangerously overheating by creating clouds in the stratosphere that can slightly lower temperatures by shading it.

One way of testing this theory would be to launch a small amount of calcium carbonate or other relatively harmless aerosols from a balloon to measure the dispersion and potential shading effects.

Recently Sweden’s space agency rejected a proposal from the Harvard group to carry out a test after receiving protests from an Indigenous group of reindeer herders. They sent a letter to the agency saying what was needed was not shade, but "zero-carbon societies in harmony with nature."