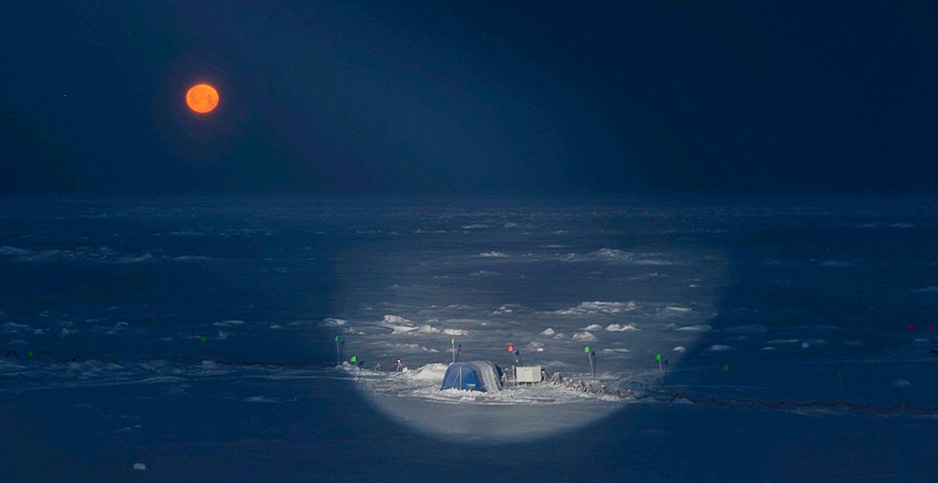 Polar night is days away. The Arctic loses several hours of daylight every day at the end of October. A research camp is illuminated by spotlight from the German ship Polarstern. Markus Rex/@MOSAiCArctic/Twitter

The countdown to polar night begins slowly. Twelve hours of sunlight a day become 10, then eight. The sunrise slowly creeps later into the morning and sets a little earlier each evening. Minute by minute, days contract in the central Arctic.

The pace picks up as September slides into October. In just five days, eight hours spiral down to three. On the last day, the sun broke the horizon this year, visible for just 12 precious minutes against the cotton-candy sky. Then, on Oct. 9, it set for the winter.

The darkness isn’t immediate. Although the sun itself doesn’t appear in the sky, there are still a few weeks of watery blue light — a time period nicknamed the polar twilight. But by November, these last shreds of daylight will dwindle away, and the long Arctic winter will begin. It will be months before the sun rises again.

For all appearances, the region becomes dormant. The winter sea ice thickens over the top of the ocean, and a dark stillness falls over the frozen seascape.

But below the ice, the waters are still brimming with life. A host of microscopic organisms lives on through the long, dark winter, biding their time until the sun returns and they can grow and multiply again.

What they’re doing all winter — and how they survive trapped beneath the ice with no light — is one of the most intriguing questions in Arctic science. It’s also one of the most difficult to answer.

Studying Arctic Ocean biology requires lots of on-site fieldwork drawing samples directly from the sea. But because the central Arctic is isolated, covered in thick ice and dark for much of the year, long research trips are relatively infrequent, and especially rare in the wintertime.

But now, scientists have a rare opportunity to investigate.

A major international Arctic research mission, known as the MOSAiC Expedition — short for Multidisciplinary drifting Observatory for the Study of Arctic Climate — will be spending the next year drifting across the central Arctic Ocean. The mission has deliberately allowed its main research vessel, the German icebreaker the Polarstern, to freeze into the winter sea ice cover in the frigid waters north of Siberia.

From there, it will drift across the ocean until it eventually emerges somewhere north of Greenland next fall. The surrounding ice will serve as its primary research camp, where hundreds of scientists from around the world will spend the year collecting data on the Arctic climate system and the frozen sea.

For Arctic biology experts, the ability to conduct research during polar night is one of the most exciting opportunities the mission offers.

"We know very little about what actually happens in the wintertime," said Rolf Gradinger, a biologist at the Arctic University of Norway and co-leader of MOSAiC’s team of ecosystem researchers.

Science in the ‘dark zone’

MOSAiC’s main research camp stretches across the ice in front of the Polarstern like a tiny village, connected by small paths for snowmobiles. There’s "Met City," where meteorological instruments collect information about the atmosphere. A dark blue tent houses "Ocean City," where scientists collect samples through a hole in the ice. In the distance, a remotely operated underwater vehicle rests beneath a red tent.

The camp is continuously illuminated by the ship’s lights for safety reasons. The main ice floe has been unpredictable in recent weeks, with cracks and ridges unexpectedly forming on the surface. And roving polar bears have been a frequent fixture on the ice.

But set off on a snowmobile across the bumpy terrain and the lights of the Polarstern eventually fall away into the darkness. At the far edge of the ice camp, MOSAiC scientists have set up a special sampling site they’ve dubbed the "dark zone" — a section of the ice floe that’s undisturbed by artificial light.

It’s a critical spot for the mission’s biologists. To find out what microorganisms are really doing in the dark, it’s essential to collect them without accidentally exposing them to light.

Scientists will venture out to the dark zone by snowmobile about once a week, says Allison Fong, an Arctic biologist at the Alfred Wegener Institute and the other co-leader of MOSAiC’s ecosystem team. About 50 meters out, they’ll stop and switch their headlamps to red light mode — a wavelength that most scientists believe doesn’t affect the behavior of microorganisms — as they approach the sampling site on foot.

Once they’ve arrived, they’ll use special machines to remove solid cores of ice from the floe, which they’ll take back to the ship for further analysis. They hope to study the bacteria, plankton and other tiny organisms trapped inside.

"These are really cool biological and physiological questions that these scientists have been waiting basically their whole careers to address," Fong said. "You can’t replicate this in the lab — these organisms live in extreme conditions, and to try to mimic this in a lab setting is very difficult. So this is an opportunity for scientists to really study this."

Scientists have some ideas already about how certain organisms might be making it through the long polar night.

Algae and phytoplankton are tiny plant-like organisms that form the foundation of the Arctic food chain. During the spring and summer, they sustain themselves through photosynthesis, using energy from the sun. But during the dark winter, Fong said, scientists suspect that they may rely on stored-up deposits of fats instead. MOSAiC samples may help to confirm this hypothesis.

And there’s some tantalizing evidence that other kinds of organisms may be more active during the winter than scientists previously suspected.

Microscopic marine animals, called zooplankton, are one major interest. Until recently, researchers generally believed that zooplankton essentially hibernated through the winter. But recent research in coastal Arctic areas found that these organisms are moving up and down in the water through the polar night.

In the summer, this kind of movement is triggered by the sun. Without sunlight in winter, researchers believe they may be responding to the small amount of light provided by the moon instead.

It’s a provocative finding, according to Fong. It suggests that zooplankton may be capable of reacting to much lower levels of light than scientists previously thought.

But there are no observations yet from deep in the central Arctic. MOSAiC’s yearlong drift will be one of the first opportunities for scientists to find out what activity is happening during the darkest months.

The researchers will conduct physiological and genetic analyses on their samples to figure out how they’re getting through the polar night and how the various types of organisms differ from one another. And they’ll also be continuously monitoring microbial activity in the Arctic Ocean, waiting to see how quickly microorganisms begin to grow as the spring approaches.

The scientists hope their work may yield some surprises — maybe even some brand-new discoveries — about Arctic biology.

"I think many of the people that I’m working with … they agree that evolutionarily, for these organisms to have adapted to that situation, that there are probably processes and activities that are happening that we just don’t know about," said Fong.

By the end of March, winter begins to loosen its grip on the North Pole. As the first hints of spring fill the air, the central Arctic transforms.

The sun finally emerges above the horizon, and the air temperature gradually begins to warm. The thick layer of winter sea ice starts to melt, and patches of open water appear. Sunlight begins to filter down through the thinning ice cover into the sea. And as it hits the water, clusters of waiting microorganisms begin to stir and multiply.

The spring algae growth is one of the most important events of the year for the Arctic ecosystem. It helps to feed the entire food chain from the bottom up.

But the timing, and even the location, of these spring blooms is starting to change.

Climate change is currently heating the Arctic faster than any other region on Earth, and the sea ice cover is dramatically declining as a result. As the ice thins, more sunlight can reach the ocean below.

Studies already suggest that the increased light is triggering algae blooms earlier in the season, and that they’re creeping farther north, as well. If this trend continues, there could be major shifts in the Arctic ecosystem — although scientists are still unsure exactly what those changes might look like.

It’s possible that some types of microorganisms will become more common, while others will get crowded out. That could affect the bigger animals that rely on them for food, driving rippling effects up the food chain.

Microbial activity may also have big effects on the movement of carbon and other nutrients through the ocean. Microorganisms tend to suck carbon out of the atmosphere, in the same way that trees do on land. More growth and activity from these organisms may draw more carbon out of the air and into the Arctic Ocean.

That’s a big topic of interest for climate scientists, who are keeping careful tabs on how much carbon goes into the atmosphere and how much comes out on an annual basis. It helps them calculate how quickly the climate should be warming and what processes may be slowing it down or speeding it up.

But like the effects on the food chain, the impact of microorganisms on carbon and nutrient cycling also depends on the types of microbes that are present and how active they are.

To figure out how these organisms might behave in the future, as the ice continues to thin, scientists need to understand how they respond to sunlight and what they’re doing as the winter transitions into spring.

Exactly when algae switch back to photosynthesis mode, for instance — and how much light they need to make that transition — is one key question. Answering these questions may help scientists predict the timing and location of spring algal blooms in a warmer climate. And it may also help them to figure out which types of organisms will become dominant in the future.

MOSAiC data, covering a complete seasonal cycle in the central Arctic, will be a "huge boost for the modeling community," Gradinger said, allowing them to make more accurate simulations of the Arctic ecosystem and better predictions about the future.

"It could very well be that there will be discoveries about new processes or important [ocean] layers we haven’t considered in the past, or we might even have overlooked in the past," he said.