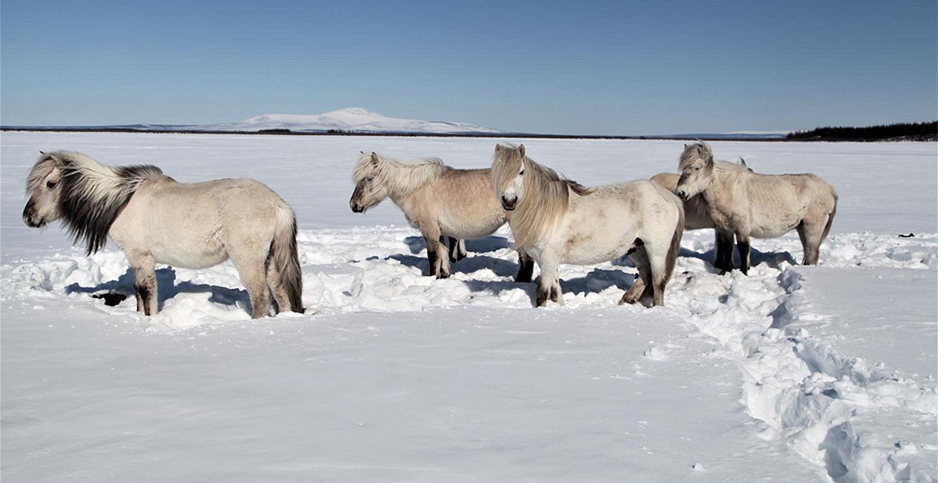 Repopulating the Arctic with some animal species, like these wild horses, could slow the pace of melting permafrost, researchers say. Pleistocene Park

Enormous herds of animals roamed the Arctic tundra thousands of years ago. Just a fraction remain today, but some scientists say they should be brought back to help fight climate change.

Wild horses, reindeer, bison, musk oxen and other large herbivores trample the ground as they plod along, packing down the earth and any snow that’s on top of it. Thick and fluffy snow tends to act as an insulator, warming the soil beneath it. But denser snow can keep soil colder.

The idea is that restoring large herds of animals to the Arctic landscape could help protect permafrost — a carbon-rich layer of permanently frozen soil stretching across much of the tundra. As temperatures rise in the rapidly warming Arctic, large swaths of permafrost are beginning to heat up and melt, releasing climate-warming carbon emissions in the process.

The idea was just a theory until now. But an unusual study published yesterday in the journal Scientific Reports makes a first case for it.

Led by Christian Beer, a soil scientist at the University of Hamburg in Germany, the researchers use a combination of observational data and model simulations to demonstrate that large herds of animals can pack down the snow in such a way that keeps permafrost temperatures significantly lower than they would be otherwise. That could prevent large areas of permafrost from thawing out, even as air temperatures continue to rise, they say.

The study relies heavily on findings from an unconventional field experiment in northern Siberia known as "Pleistocene Park." Covering about 8 square miles of fenced-in and icy Russian steppes, the park was established in 1996 by Russian scientist Sergey Zimov, who runs the project with his son Nikita Zimov.

It’s named after an ancient geological epoch for a reason. The Zimovs are working to figure out how the landscape might change if it were repopulated with large herds of animals — the type that roamed the region thousands of years ago. To that end, they filled the park with bison, moose, yaks, reindeer, wild horses and other herbivores. They’ve been monitoring the ecosystem ever since.

The researchers hypothesized that their experiment might have a cooling effect on the local landscape. Now, some of the first published results suggest that they might be onto something.

They appear to be having a noticeable effect. Measurements collected on-site suggest that the depth of the snow is about 50% lower than the surrounding areas, and the soil is nearly 3.5 degrees Fahrenheit cooler.

The researchers used the data to inform a series of model simulations. They wanted to investigate how, theoretically, spreading large herds of animals across the entire Arctic could affect the landscape in the coming decades.

They used a kind of worst-case hypothetical climate scenario as the basis for their simulations, one assuming around 9 F of average global warming between now and the end of the century.

It’s not a scenario that’s likely to occur in real life (although it’s not impossible) — but one that’s meant to illustrate the difference between the current Arctic ecosystem and the one envisioned by the researchers.

If snow cover was packed down across the Arctic, the simulations indicate that permafrost would stay several degrees cooler than it otherwise would. And the total area of permafrost lost to Arctic warming would be substantially reduced.

That said, the study is just the first word on the subject. There are major uncertainties about the effect of reintroducing large herds of wild animals to the ecosystem.

Their effect on local vegetation, for instance — and how those changes might impact the soil below — is an open question. It’s also unclear whether wild animals could be reintroduced in the numbers assumed by the new study.

For now, the research can be considered a kind of first step in advancing an unusual theory — a demonstration that snow cover plays an important role in regulating the temperature of permafrost and that wild animals can significantly influence that role.

It’s an illustration of "the need of much more detailed field studies," the researchers wrote.