Scientists pour onto the Arctic ice (so does their whiskey) 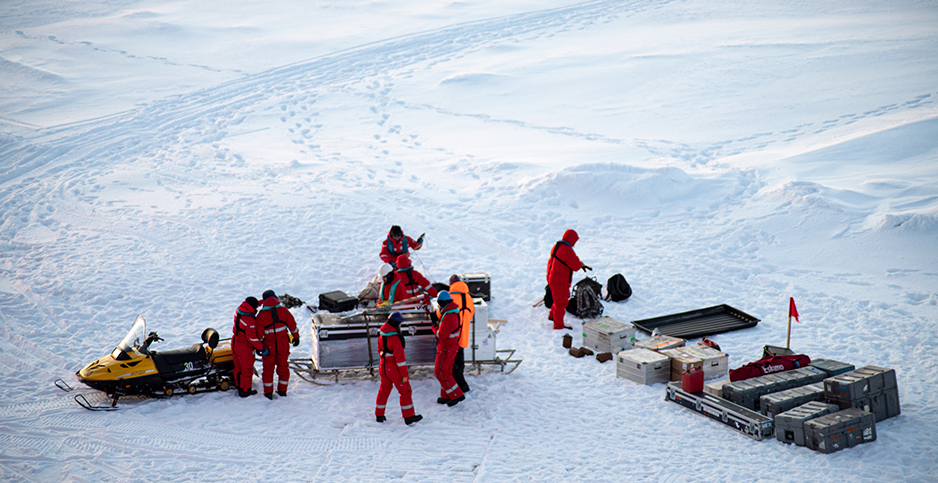 Researchers set up the first "L site" in the distributed network on an Arctic ice floe. Chelsea Harvey/E&E News

ON BOARD AKADEMIK FEDOROV, Barents Sea — Arctic sea ice has a distinctive taste.

It’s the slightest bit sweet in the first split second. That’s unexpected. Then, creeping around the edges, the salt flavor of ocean brine seeps through.

Paired with whiskey, it makes a delicate cocktail.

Members of the MOSAiC Expedition gathered Saturday night on Russian research vessel Akademik Fedorov to share a celebratory drink: whiskey, gin or rum chilled over chunks of freshly harvested Arctic sea ice. It was the end of a successful workday and the start of a new phase for the Arctic science mission.

Earlier that day, under the pink glow of a brilliant polar sunrise, scientists on board the ship had trooped out onto the frozen surface of the sea. Armed with crates of heavy scientific equipment, they labored for hours drilling holes in the ice, deploying buoys into the cold water beneath and setting up other instruments on the surface nearby.

This ice floe will serve as the first node in a network of drifting science stations clustered in the central Arctic Ocean. These stations will provide supplementary data to complement the measurements collected at MOSAiC’s main science hub: a large floe currently floating in the isolated waters around 85 degrees north and 137 degrees east, where researchers will deploy a complex research camp on the surface of the ice.

Together, the central camp and the surrounding "distributed network" of additional science stations will spend the next year drifting across the sea, collecting measurements on the central Arctic’s intricate and enigmatic climate system.

Expedition leaders selected the main floe last week and have moored their primary research vessel — German icebreaker Polarstern — to the ice. In the coming weeks, they’ll steadily unload their equipment onto the ice and construct the central research camp.

In the meantime, Akademik Fedorov will continue to set up the distributed network in nearby waters.

Altogether, the network will include three large hubs, dubbed "L sites," on sizable ice floes scattered around the main science camp. Saturday’s project was the first of these. Each one can be constructed by mooring Akademik Fedorov directly to the floe and simply walking down the gangway onto the ice.

The L sites will be complemented by a series of eight simpler stations on smaller ice floes, known as "M sites," accessible only by helicopter. An additional 40 GPS sensors will be placed across the ice to monitor the way the ice moves and changes over time.

It’s a high-pressure operation. The distributed network crew are under a time crunch to finish their work.

Akademik Fedorov is only chartered for MOSAiC through the end of the month and must arrive at the port city of Tromsø, Norway, by Oct. 31. Allowing for the difficulties of navigating through thickening winter sea ice, and the possibility of unexpected weather events, the ship must begin its journey back from the central Arctic about two weeks in advance.

For now, the operation is proceeding on schedule. But the threat of sudden weather events or other unexpected difficulties, as well as the waning Arctic daylight hours, still looms.

"I’m pretty sure we’ll be going up to our [time] limit — because of weather, not because of preparedness," Stanton said in an interview yesterday. "I was always horrified at the schedule, because it didn’t really have weather contingency built in."

An operation with an expiration

The distributed network team has been feeling the pressure for more than a week. According to the MOSAiC design, the network should surround Polarstern and its main science camp. That meant work on the network couldn’t begin until the main ice floe had been selected.

And selecting the main floe proved a major challenge. A suitable floe had to be both large enough and thick enough to support a heavy research camp. But after decades of steady warming in the Arctic, the region’s sea ice cover has gradually grown thinner.

Experts on both Polarstern and Akademik Fedorov spent days conducting ice surveys, both by helicopter and on the ice. But site after site proved too thin or too unstable to be considered.

The distributed network team on Akademik Fedorov waited restlessly for updates. Most of the crew had already unpacked and tested their instruments in the expedition’s first few days, meaning there was little to do during the floe surveys but wait for news.

Meanwhile, with a concrete expiration date on Akademik Fedorov’s mission, team leaders considered contingency plans in case the search wore on too long.

"We’ll just pick some floes," Stanton told E&E News while the hunt was still ongoing, when asked what would happen if the time crunch began to grow critical. "We’ll find some floes, and we’ll deploy some equipment. Even if it’s not all around the Polarstern, we’ll get some — not all, but some."

This course of action would have been a "huge diminished return compared with the design," he added. "So that’s not done glibly."

Even so, it’s essential to be adaptable and to plan for worst-case scenarios on polar expeditions, Stanton said. The same is true now that work on the network has begun.

In an ideal world, with no weather events or other disruptions, Stanton estimated the distributed network could probably be completed in six to eight days. As of yesterday, the first L site had been completed and work had begun on the second, leaving eight more days to finish everything.

"I think the schedule is going extremely well right now — but that’s because the weather’s been fabulous," Stanton said. "And there lies the problem. It’s not going to continue."

The three large L sites contain the most equipment and are the most essential to the mission’s design. So it’s important that they’re deployed according to plan. But it won’t be surprising if not every M site or P site is completed by the end, Stanton noted — and it won’t be a disaster for the expedition if that’s the case.

"If the weather just keeps waling on us, we’ll become a little down-drawn in the mouth, but we always will just make the best of opportunities," he said. "The thing now is to get ready for the next one."

MOSAiC Expedition leader Markus Rex, of the Alfred Wegener Institute, says the mission is proceeding well ahead of schedule.

"In each expedition, people in the beginning become very nervous," Rex said. "They want to do things. It’s hard to stay on board of a vessel and not being able to carry out the task."

"Time is running out, of course, but it’s running out at a slower pace than we thought," he added.

For the expedition crew, it’s just good to be working again after a long stretch of relative quiet.

"I’m just eager to get all of our stuff in the water and get everything working right," said Andy Davies, an engineer with the Woods Hole Oceanographic Institution. "We’re all eager to get stuff going."