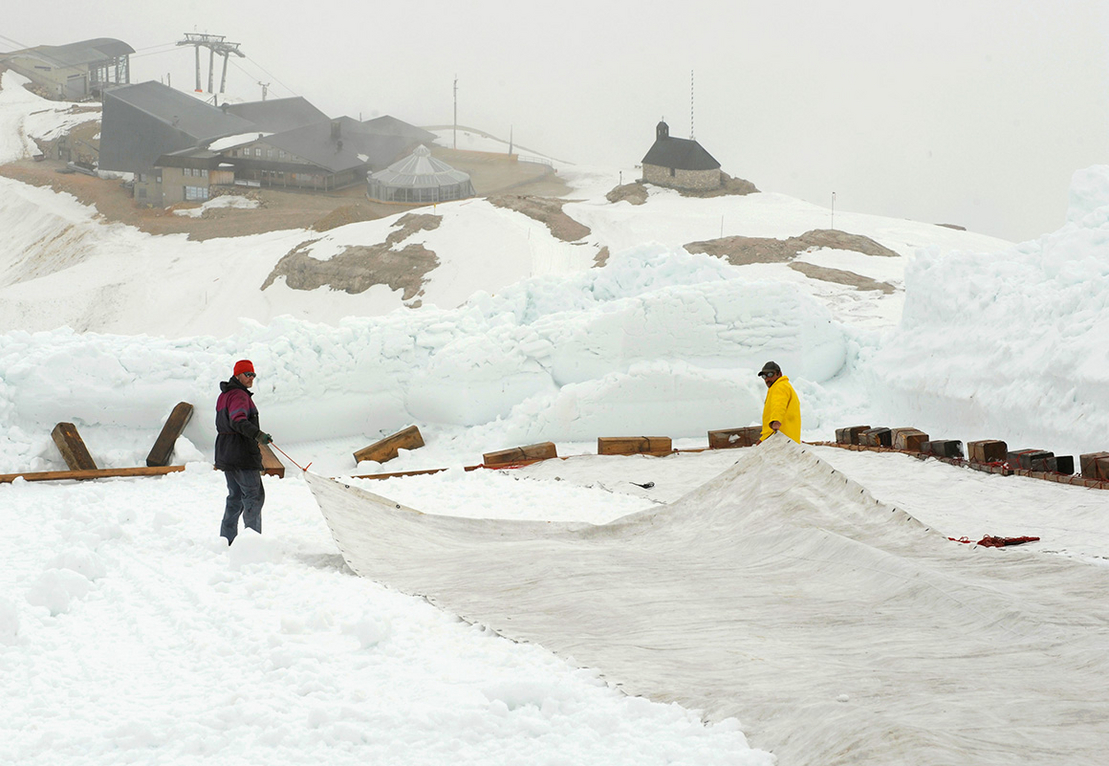 Glaciers are melting and shrinking across the iconic Swiss Alps as the climate warms. A new campaign by Mastercard Inc. claims to be helping them — by donating reflective shrouds to cover them up and keep them cold.

The new campaign partners with the nonprofit Cover Project Foundation, which works to prevent certain Swiss glaciers from melting. The organization currently has three main projects: the Morteratsch, Diavolezza and Lischana glaciers.

At some large sites, like Morteratsch, it attempts to slow the melting by adding extra artificial snow. At smaller sites, it covers up the natural snow with fleecy white blankets in the summer, reflecting the sun away.

These strategies have proved effective locally. The Cover Project Foundation claims that Diavolezza, for instance, has thickened by about 30 feet over the last 10 years.

Mastercard’s new campaign in Switzerland aims to support these efforts. For every transaction between Oct. 1 and the end of the year, the corporation pledges to donate a credit card-sized patch of fleece for one of the Cover Project Foundation’s sites. It promises a minimum of 50,000 square meters of coverage and caps it at 100,000 square meters.

“If global warming continues as it has before, we will have almost no more glaciers in a hundred years,” Daniela Massaro, country manager of Mastercard Switzerland, said in a statement. “By covering the glaciers, we can make a significant contribution to reducing the melt.”

But some glacier experts point out that these efforts have a limited, mostly local reach.

The Cover Project Foundation currently applies fleece coverings at a couple of sites. One of these, Diavolezza Glacier, is primarily a ski resort. The other, Lischana Glacier, provides a small freshwater reservoir. Some of the foundation’s current work aims to preserve small, local water sources that could disappear as glaciers shrink.

Still, the area that might be covered through the Mastercard campaign would be a tiny fraction of the total glacier surface in Switzerland, Matthias Huss, a glaciologist at the Swiss Federal Institute of Technology, said in an email to E&E News. It benefits a local project but doesn’t protect Swiss glaciers on the whole.

For one thing, scientists have some concerns about the environmental impact of covering glaciers with synthetic materials. Some Alpine glaciers are important sources of fresh water for communities downstream, and the potential for contamination would need to be carefully studied.

Huss pointed to a recent study he led, along with colleagues from the Swiss Federal Institute for Forest, Snow and Landscape Research and the University of Fribourg. Reflective coverings are locally effective, they found — in Switzerland, they tend to reduce melting by about 60 percent. There are nine sites across the country where reflective coverings are deployed, and they’ve saved an estimated 350,000 cubic meters of ice since the projects kicked off nearly 20 years ago.

But they’re expensive. The study estimates that saving a single cubic meter of ice costs anywhere from 0.6 to 8 Swiss francs per year — that’s around the same amount in U.S. dollars.

It’s an effective solution for small, local sites — particularly ski resorts, popular tourist destinations and other economically important areas. But the current projects account for only about 0.02 percent of the total glacier area in Switzerland, the study notes. Saving them all with fleecy coverings would be prohibitively expensive.

The only real way to protect them all is to halt global warming, the study concludes.

It’s a growing issue for the Swiss Alps, as well as mountain glaciers across Europe and around the world. The European Environment Agency estimates that glaciers in the European Alps have lost half their volume over the last 100 years, and they could further decline by as much as another 90 percent by the end of the century if global warming continues unabated.

Worldwide, research suggests that mountain glaciers have lost about 10 trillion tons of ice since the 1960s alone (Climatewire, Jan. 25).

Local tarp projects can be useful in the few places where they’re employed, but they’re not a universal solution, experts say. And large corporations like Mastercard can put their resources toward bigger purposes, experts add.

“I am strongly against selling this local intervention (with a very local benefit) as a measure against climate change, or for saving glaciers as a whole as it is done here,” Huss said in his email.

While he has no problem with local interventions, including the work being done by the Cover Project Foundation, he suggested that companies like Mastercard should invest in carbon-cutting projects or technologies to really have an impact on the climate.

Other scientists have taken to Twitter with similar arguments.

The glaciology group at the Swiss Federal Institute of Technology took issue with Mastercard’s description of the campaign, which stated that “cardholders support our climate simply by using their cards.”

“While we don’t question @MastercardCH’s good intentions, this is very misleading: the climate doesn’t profit from covering glaciers with blankets,” the group tweeted on Monday. “The only way to ‘support climate’ is to abate our emissions!”