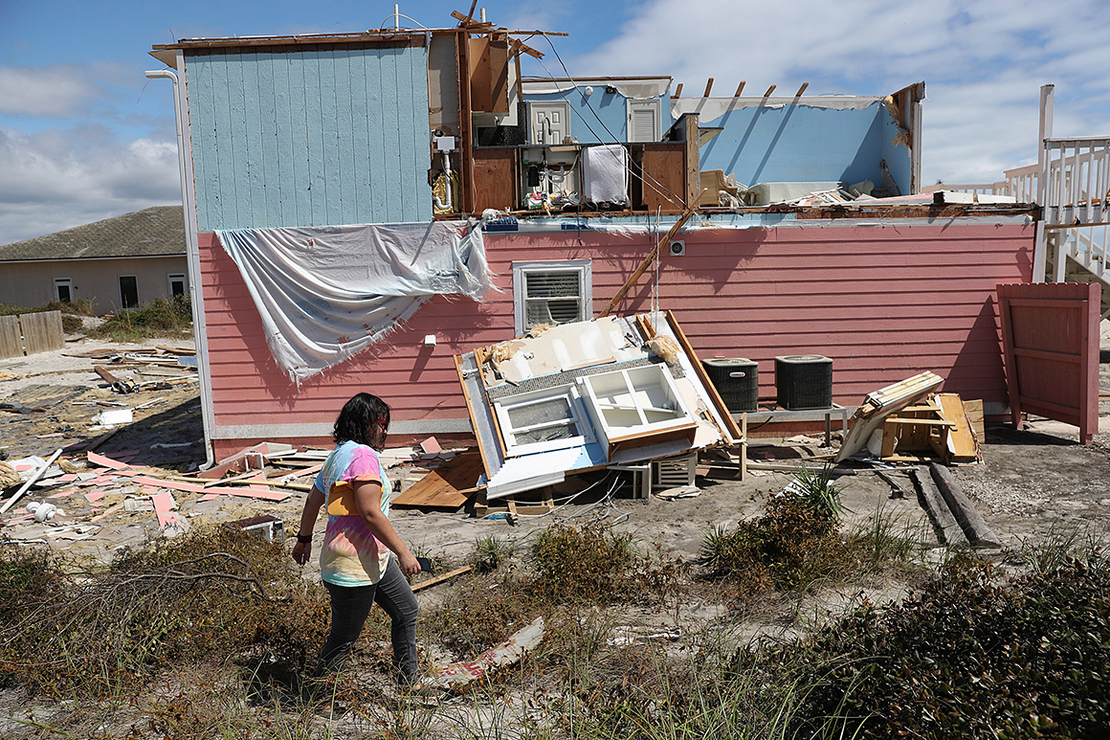 A real estate agent checks in on an apartment building that she manages after the roof was blown off when Hurricane Sally passed through the area on Sept. 17, 2020, in Perdido Key, Fla. Joe Raedle/Getty Images

Rose Abramoff drove from her home in Knoxville, Tenn., to the nation’s capital last week to chain herself to the White House fence.

The climate scientist was among seven demonstrators arrested on April 6 (and later released). Their motivation: the dire warning that time is swiftly running out to meet the world’s climate goals, as detailed in a major report last week from the United Nations’ Intergovernmental Panel on Climate Change.

Two days later, Abramoff was back — this time marching with a group of climate activists down I-395 at rush hour. The group was arrested again, but not before they’d stalled traffic on one of Washington’s busiest highways.

In both cases, their demands were clear: faster, stronger climate action from world governments and an end to the burning of fossil fuels.

“It was my first experience with civil disobedience for any reason,” said Abramoff, a climate scientist at Oak Ridge National Laboratory, who emphasized that her activism is conducted on her own behalf and does not reflect the positions of her institution. She also spoke with E&E News only on her own behalf.

In the past, she’d participated in marches and worked with nonprofits, community groups and educational programs on issues related to climate change. But most of her previous activities were “fitting into that regular mold of scientists as primarily non-partisan and non-activist,” she told E&E News. “This was my first real departure from that.”

Abramoff participated in last week’s demonstrations as part of the climate movement “Scientist Rebellion” — a loosely knit, international organization of scientists advocating for stronger climate action through nonviolent protests and acts of civil disobedience. (Abramoff is one of the organizers for participants in the U.S. and Canada.)

Scientist Rebellion started out as a small, largely European movement a couple of years ago, according to Abramoff. It has recently attracted greater attention from scientists around the world. Last November, it held its first coordinated international campaign with demonstrations in Glasgow, Scotland, during a major U.N. climate conference.

Most recently, participants staged demonstrations in cities around the world after the release of the IPCC climate report last week, demanding swifter and stronger global efforts to cut greenhouse gas emissions.

In Los Angeles, four scientists were arrested after handcuffing themselves to the entrance of a Chase bank. In Germany, scientists demonstrated outside the Ministry for Economy and Climate Protection. In England, they protested outside Shell PLC headquarters. They pasted documents to government buildings in Mexico, occupied an oil and gas company’s headquarters in Italy, and threw fake blood onto the facade of the National Congress in Spain.

Scientist Rebellion estimates that a total of around 1,000 scientists in 25 countries participated in last week’s demonstrations, often wearing lab coats to identify themselves.

Many of them were joined by protesters from other movements and organizations. Abramoff was joined in Washington by protesters from climate activist group Declare Emergency and Indigenous activist groups Honor the Earth and Camp Migizi. Extinction Rebellion, an activist movement calling for stronger government action on global threats to the world’s ecosystems and biodiversity, also staged a number of demonstrations around the world last week in response to the new IPCC report.

In an open letter signed by more than 150 scientists from around the world, Scientist Rebellion describes itself as a group of “scientists and academics who believe we should expose the reality and severity of the climate and ecological emergency by engaging in non-violent civil disobedience. Unless those best placed to understand behave as if this is an emergency, we cannot expect the public to do so.”

The group has adopted, as a kind of slogan, the phrase “1.5C is dead. Climate revolution now!” It’s a reference to the Paris climate agreement’s goal to keep global warming below 1.5 degrees Celsius, if at all possible, or “well below” 2 C.

The world has already warmed by more than a degree Celsius, meaning both targets are rapidly approaching. And the release of the latest IPCC report has called into question the world’s ability to meet the 1.5 C target at all. Global emissions would have to peak within the next couple of years, fall by nearly half within the next decade and reach net zero by midcentury.

While it may be possible to lower global temperatures back down below 1.5 C later on, by physically removing carbon dioxide from the Earth’s atmosphere, many experts believe that overshooting the target — at least temporarily — is extremely likely at this point.

“It is almost inevitable that we will at least temporarily overshoot 1.5,” Jim Skea, an energy expert at Imperial College London and co-chair of the IPCC working group that prepared the report, said in a virtual presentation of the findings last week.

Scientist Rebellion shares many common goals and strategies with other climate activist groups, like its cousin Extinction Rebellion, including an emphasis on nonviolent civil disobedience. Organizers describe the movement — and its emphasis on participation from scientists — as an effort to draw greater attention and credibility to climate activism.

“There is a lingering public perception that activists are extremists who are exaggerating the problem and overreacting by breaking the rules,” the organization’s website states. “Scientists becoming more involved in activism, particularly when it involves arrestable offenses, increases the credibility of civil disobedience. As one of our members puts it: ‘They can’t just dismiss us as a bunch of hippies.’”

The scientific community has historically expressed mixed opinions about the extent to which scientists should also become activists on subjects related to their own work. But in recent years, a growing number of scientists have begun to advocate for more activism on the issue of climate change.

“There’s really a paradigm shift that’s starting among scientists about this idea of neutrality and remaining unbiased,” Abramoff said. “I really think that this shift is just an acknowledgment of the inherent humanity of scientists and the fact that we have feelings — and unalienable rights to express those feelings.”

Some scientists have occasionally posed controversial suggestions for activism.

In December, a trio of environmental scientists published an op-ed in an academic journal calling for climate scientists to stage a global strike. Scientists should refuse to conduct any more climate research — at least in areas where they are “simply documenting” the impacts of global warming on the planet — until governments agree to stronger climate action, they suggested.

The paper met with mixed reviews from other scientists voicing their opinions on Twitter. While some sympathized with the authors’ frustrations, others argued that scientists have an ethical responsibility to continue their research and should work to bring about social change in other ways.

Most activists aren’t calling for a moratorium on scientific research. But a growing contingent of scientists around the world are advocating for greater participation in climate activism and environmental justice movements.

“It makes no sense for scientists to stay silent when their science informs them of existential risk from a clear and present danger that’s mounting very, very rapidly,” said Peter Kalmus, a NASA climate scientist. Kalmus also stressed that his activism, and his interview with E&E News, are conducted only on his own behalf and don’t reflect the positions of his employer. “I feel that all scientists should be speaking out like this and taking action,” he said. “And not only that, but scientists have a moral responsibility to do so.”

Kalmus also participated in a demonstration last week as part of the Scientist Rebellion campaign. He and three other scientists donned lab coats and gathered at Pershing Square in LA, where they chained themselves to the entrance of a JPMorgan Chase & Co. bank and called for an end to the burning of fossil fuels. According to Bloomberg, JPMorgan Chase is the world’s top provider of finance to the fossil fuel industry.

On the door behind them, they posted a forest-green sign stating, “We are nature defending itself.”

“The scientists of the world have been ignored, and it’s got to stop,” Kalmus said in an emotional speech as he stood chained to the bank’s door. “It’s time for all of us to stand up and take risks and make sacrifices for this beautiful planet that gives us life, that gives us healthy air.”

Police eventually arrested all four scientists after they declined to clear the area. They were later released.

It was Kalmus’ first experience risking arrest while engaging in civil disobedience, he told E&E News. But he has been involved in various other forms of climate activism for at least 16 years. Kalmus has two teenage sons and says he’s “willing to risk everything” to ensure a livable planet for his children.

“I feel actually genuinely desperate and terrified,” he said. “I can see so clearly where we’re heading in terms of climate change, and I don’t sense any momentum or any intention on the part of world leaders to actually genuinely take care of this planet and take care of this problem, which really does require ending the fossil fuel industry as quickly as possible.”

To reach the Paris Agreement’s climate goals, the IPCC has warned that global emissions should peak by the year 2025. As that milestone approaches, Abramoff said, she anticipates more activism from concerned scientists around the globe.

“Now that we’re sort of a growing movement, I think you’ll probably see increasing rates of actions happening all over the world,” she said. “I think you’ll be seeing a steady smattering, hopefully a slowly growing groundswell of action as the clock ticks down to 2025.”