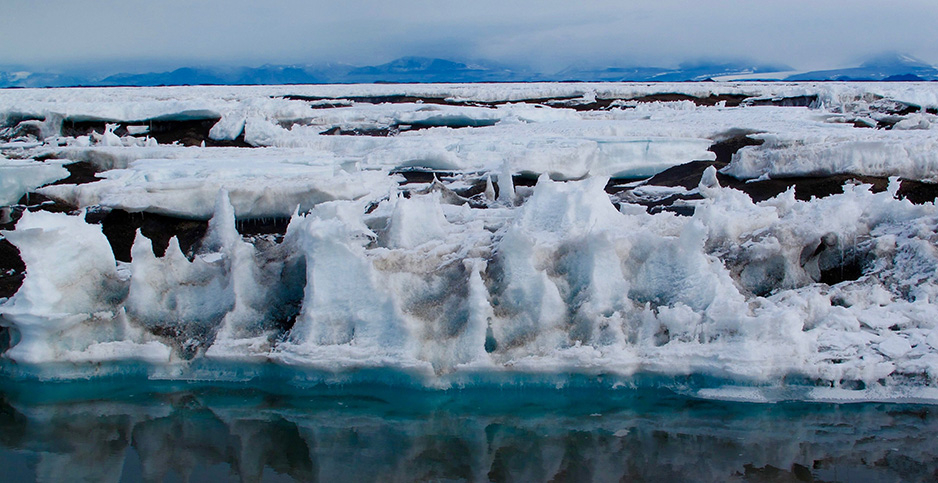 At McMurdo Ice Shelf, scientists have observed for the first time a process that could contribute to the fracturing of ice shelves. Ian Willis

A summer expedition to Antarctica’s McMurdo Ice Shelf two years ago documented an intriguing phenomenon: As ice melted and water collected into pools, the huge shelf flexed downward in response to the extra weight on its surface.

The ice bounced back up when the pools drained off the shelf later.

Scientists have long hypothesized that ice sheets might move in this way. But this is the first time it’s ever been observed.

"It was commonly accepted that it was happening," said lead study author Alison Banwell of the Scott Polar Research Institute at the University of Cambridge — but now there’s direct evidence.

It’s a milestone in Antarctic ice research. Scientists have suggested that this flexing can put stress on the ice and make it more likely to fracture and break into pieces. In fact, researchers believe it’s happened before.

In 2002, the Larsen B Ice Shelf on the Antarctic Peninsula suffered a famously catastrophic collapse, resulting in near-total destruction of the ice shelf. Satellite imagery showed that meltwater lakes had been accumulating on the surface of the ice shelf prior to its demise, and that many of them drained shortly before the shelf disintegrated. As a result, scientists suggested that these lakes were likely a factor in its destabilization.

Past research has documented widespread networks of rivers and lakes on Antarctic ice shelves — so scientists already knew that pooling and drainage does occur. And at least one study has suggested that the presence of flowing rivers on an ice shelf may actually stabilize the ice by carrying water away and preventing it from pooling on the surface.

It’s when lakes form, and the weighty water rests on top of the surface, that scientists become worried about the pressure it puts on the ice.

The researchers observed that as meltwater accumulates into a pool or a lake, it puts pressure on that single point on the ice shelf, causing the immediate area to bend downward beneath its weight. Eventually, the lakes would grow big enough to overflow, and the water would run off over the course of a few days, releasing the pressure and allowing the ice to spring back up.

Scientists postulate that these events could happen in different and potentially more damaging ways in other places, Banwell pointed out. If there are existing weaknesses or cracks in the ice where a lake forms, then a process called hydrofracture could occur — water could flow into the crack and cause it to widen even further.

As a crack opens up at the bottom of the lake, it may allow the water to drain out in a short amount of time, causing the ice to suddenly rebound. That could increase the likelihood that its motion might worsen the break. Scientists have also suggested that as cracks spread throughout an ice shelf, they could cause other meltwater ponds to suddenly drain, as well, leading to a kind of domino effect that can destabilize a shelf and cause it to eventually collapse.

The research team didn’t find any fractures at McMurdo, despite the flexing — so this effect still has not been observed in real time. But when the scientists plugged their findings into a mathematical model, they found that, theoretically, the amount of stress they observed should be enough to cause the ice to break.

At McMurdo, that means there could be outside factors preventing the ice from fracturing, Banwell said — perhaps the pressure of sea ice pushing up against it or other forces acting on other parts of the ice shelf are holding it together.

In any case, it’s not necessarily a given that pooling, draining and flexing could cause a catastrophic event on the ice in every place it occurs. At any individual ice shelf, "it’s hard to know what exact stress criterion is required for fracture," Banwell said.

Not all ice shelves are alike. Some are thinner or weaker or shaped differently than others, and a stressor that causes one ice shelf to crack or collapse may not have the same effect in a different place. In general, some kinds of sites may be more vulnerable than others.

For now, actually seeing the flexing happen in real time is a breakthrough. It confirms that the process does happen in real life, and it could help ice sheet models account for the complex processes affecting glaciers on a warming planet.

"The continental-scale ice sheet models, that we use to try to say something about what sea level might do in the future, are just now beginning to think about how to incorporate processes like these," said Rob DeConto, an ice sheet expert at the University of Massachusetts, Amherst.

"Ultimately, what we would want to do is use studies like [Banwell’s] to find a way to scale those processes up to the bigger scale and then put them in these continental models," DeConto said. "I would say adding the flexure component is going to be an important piece of this."

And it may be more important as the climate continues to warm. Some research has suggested that surface melting on the Antarctic ice sheet may increase by two- or threefold over the next few decades, which suggests the potential for bigger, heavier meltwater ponds forming on top of the ice.

"All the climate model predictions imply expanding area of more and more meltwater — like way more than the place [Banwell] looked at and studied," DeConto said. "And so the question is what happens, then, when the ice shelves are really just kind of swamped with meltwater in the summers? It might be a really different picture than the systems we see in today’s climate."