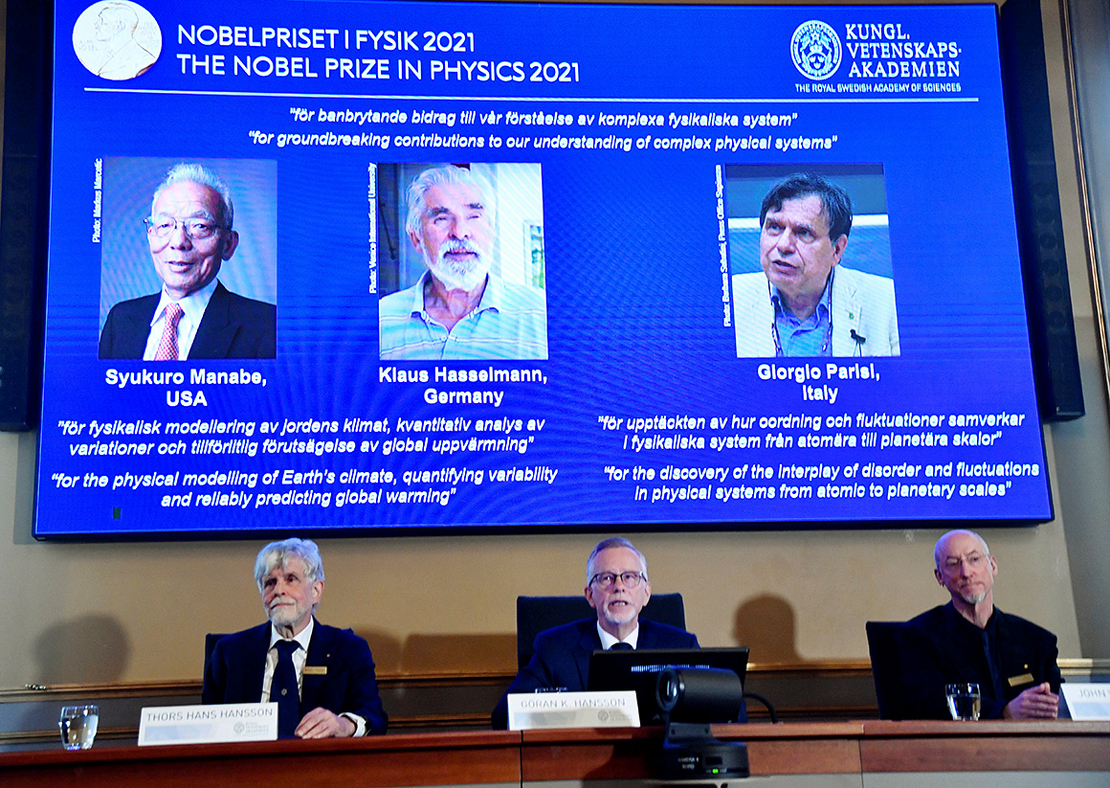 Three scientists won the Nobel Prize in physics today for work that laid the foundation for modern climate science.

Half of the prize went to Syukuro Manabe of Princeton University and Klaus Hasselmann of the Max Planck Institute for Meteorology in Hamburg, Germany, for “the physical modeling of Earth’s climate, quantifying variability and reliably predicting global warming,” according to a statement from the Nobel Prize in Physics Committee.

Giorgio Parisi of Sapienza University in Rome received the other half for finding patterns in complex systems, from atomic to planetary scales.

“The discoveries being recognized this year demonstrate that our knowledge about the climate rests on a solid scientific foundation, based on a rigorous analysis of observations,” Thors Hans Hansson, chair of the Nobel Committee for Physics, said in a statement. “This year’s Laureates have all contributed to us gaining deeper insight into the properties and evolution of complex physical systems.”

"Complex systems" are defined by disorder — their randomness and variability are hard to pin down, understand and predict. Considering how far-reaching and challenging it is to get ahead of, climate change is a banner complex system.

Manabe, now 90, created the first models in the 1960s that showed how increasing carbon dioxide emissions would warm the Earth’s surface, bringing a specification to the process that hadn’t been defined before. His work became the foundation for which scientists would show how climate change would worsen as emissions continued.

“The whole field of climate modeling originates with Suki,” said Gabriel Vecchi, Princeton University’s deputy director of the Cooperative Institute for Modeling the Earth System, in a statement. “And he, in doing so, not only illustrated some of the potential consequences of global warming, but gave us a roadmap of how to do climate science.”

About a decade later, Hasselmann, 89, modeled how weather links to climate, demonstrating that climate models can be reliable despite the seemingly chaotic changes and patterns in weather.

He also found ways to show how humans are influencing climate, which have been used to prove that rising atmospheric temperature is due to human-made CO2 emissions.

Manabe and Hasselmann went on to contribute to the first Intergovernmental Panel for Climate Change report in 1990 and are attributed for being the cornerstone of today’s climate models.

Michael Mann, atmospheric scientist and Penn State University, said in a tweet that Manabe is the “grandfather of modern climate modeling.”

Meanwhile, Parisi, who is 73, built a physical and mathematical model to create a deep understanding of complex systems in fields from mathematics to biology and machine learning.

Parisi’s work was on spin-glass, a metal alloy that has a seemingly random atom arrangement that changes the metal’s magnetic properties, which stumped scientists across the globe. He found a hidden pattern that explained the behavior and how that theory can be applied to other research fields, too.

His work seems to bear little relation to climate models. But the Nobel Committee saw Parisi’s theory as a smaller case for the head-scratching behavior of the Earth’s climate.

“It’s very urgent that we take very strong decisions and move at a very strong pace” in tackling global warming, Parisi said in a conference after winning the award, stressing the importance of climate research.

The award comes at a time when their work is of utmost importance to understanding climate change. The projections are dire — an IPCC report released in August warned that the world can’t stop global warming from intensifying. The warmer temperatures have already spurred some of the most intense wildfires and natural disasters while also causing record heat this past summer.

Hasselmann told the Associated Press he “would rather have no global warming and no Nobel prize.” Manabe added in another interview that “figuring out the physics behind climate change was easier than getting the world to do something about it.”

Hasselmann and Manabe will split the 10 million Swedish krona, about $1.4 million, with Parisi.