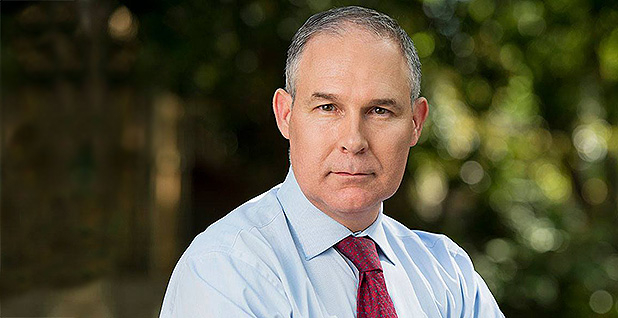 Former EPA Administrator Scott Pruitt is bringing resistance to the so-called war on coal to the Hoosier State.

The statement was a confirmation of news stories last week, initially from The Indianapolis Star, saying Pruitt had registered as a lobbyist for RailPoint Solutions LLC, a mysterious entity that appeared to be tied to Sunrise (Greenwire, April 19).

It’s a return to form for Pruitt, who spent much of his nearly 17 months at EPA railing against Obama administration policies that he characterized as a "war on coal." He resigned in July 2018 under the cloud of accusations that he violated ethical conflict-of-interest standards and improperly used his office for personal gain.

Hallador, a publicly traded company whose official motto is "Coal Keeps Your Lights On," detailed its charge to Pruitt in its Saturday statement that framed the issue as one about protecting Indiana ratepayers.

Pruitt will press the Indiana General Assembly to require the Indiana Utility Regulatory Commission to reject plans by power companies Vectren Corp. and the Northern Indiana Public Service Co. (NIPSCO) to shut down most of their coal-fired plants in the next decade. Sunrise’s four operating mines are in Indiana, and they sell nearly exclusively to power plants.

Hallador says the Vectren and NIPSCO plans would increase electricity rates, since they want to recover the costs of replacing the plants and that the companies made their plans based on Obama administration regulations that President Trump is repealing. The utilities have said rates would go down in the long term when the plants are replaced by natural gas and renewables.

"Their argument is that no one knows what the new rules will look like so we should hurry and make permanent decisions today," Hallador said of the Vectren and NIPSCO plans. "Who better than Scott Pruitt to aid the Indiana Legislature on what Trump energy policy will look like?

"In the last 10 years, Indiana coal consumption has declined by 26%, at the same time Indiana electricity rates have increased by 26%. Is there a correlation?" the company asked in its statement.

"At the same time, Indiana has slipped from the 6th most competitive state based on electricity rates to 30th. Will this affect job creation?" the statement said.

The utility commission is planning to meet on Vectren’s request Wednesday.

Hallador said Pruitt will be pushing lawmakers to add legislative language to a budget bill that would prohibit the utility commission from considering EPA regulations that are being reconsidered or repealed — like the Clean Power Plan — in its rate decisions.

"We are asking the Indiana legislature to act and prevent rates from increasing unnecessarily," it said. "A failure to act will most assuredly lead to higher rates on Indiana consumers and businesses." Hallador failed to respond to a request for further comment or to make Pruitt available for an interview, and Pruitt didn’t respond to messages sent to his email address on the state lobbying disclosure.

"The decisions we’re making regarding generation are squarely focused on economics and cost savings for our customers. This was not a politically driven decision," he told E&E News, adding that although rates will increase in the short term, ratepayers will save money in the long term. NIPSCO is a subsidiary of utility giant NiSource Inc.

Vectren, a subsidiary of CenterPoint Energy, did not respond to requests for comment. It has also said the plan will save customers money.

Indiana lawmakers have already rejected one proposal meant to stop the coal plant closures. The bill, from state Rep. Ed Soliday (R), would have prevented any new power generating facilities — like natural gas power plants or wind farms — through 2021. It passed the House utilities committee, chaired by Soliday, by an 8-4 vote, but it failed in the full House, 53-38 (Energywire, April 4).

Environmentalists and some business groups have pushed back against legislative attempts to tie the utility commissioners’ hands.

"We’re sending the wrong signal to the investment world, which we continue to do with energy policy in Indiana," Kerwin Olson, executive director of the Citizens Action Coalition, a consumer and environmental advocacy group, told E&E News earlier this month. "It’s indicative of other policy decisions in Indiana, where it’s 1950 all over again."

The plant closures are part of a yearslong trend in the United States, fueled by environmental concerns, regulations and costs. More than 500 coal-fired generators retired between 2007 and 2017, according to the Energy Information Administration.

Pruitt is prohibited, under President Trump’s ethics pledge, from lobbying EPA for five years after his resignation or from lobbying any Trump administration political appointee while the president is in office.