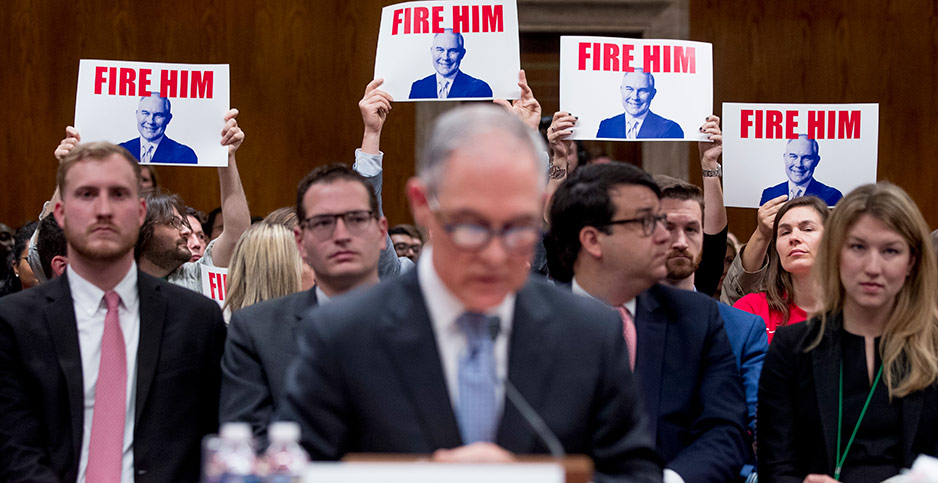 EPA Administrator Scott Pruitt is leaving the agency following months of turbulence around his ethics missteps. He's seen testifying before Congress in May. Andrew Harnik/Associated Press

Scott Pruitt is already an afterthought.

After months of dominating headlines for scandals like pricey taxpayer-funded travel, his penchant for Ritz-Carlton lotion and trying to land a high-paying job for his wife, it took no time for the spotlight to swing to his replacement.

Once President Trump announced Pruitt’s resignation via Twitter, attention turned to the next chapter of the Trump EPA: the one headed by former coal lobbyist Andrew Wheeler.

"I have no doubt that Andy will continue on with our great and lasting EPA agenda. We have made tremendous progress and the future of the EPA is very bright!" Trump tweeted.

Even some of Pruitt’s former allies were ready to bid farewell to an EPA chief whose endless controversies caused headaches for Republicans. They’re hopeful Wheeler will shepherd Trump’s policy agenda without the need for constant damage control. Critics of the Trump administration, meanwhile, took a quick victory lap but pledged to keep pressure on his successor.

"Outrage from the American people are what just got rid of Scott Pruitt," billionaire climate activist Tom Steyer said. "Of course, his acting replacement couldn’t be worse: a coal lobbyist with ties to the most famous climate denier in the country. We must ensure that Andrew Wheeler is met with the same anger and effective organization that led to Pruitt’s resignation."

Trump said yesterday that the decision to resign was Pruitt’s alone. The two had rubbed elbows a day earlier on the White House lawn while celebrating Independence Day.

"He came to me and he said, ‘Look, I have such great confidence in the administration; I don’t want to be a distraction,’ and I think Scott felt that he was a distraction," Trump said yesterday aboard Air Force One, according to a pool report. "It was very much up to him."

But even if Trump still had his back, Pruitt had long ago lost the support of White House staffers. EPA aides complained that the controversies hurt their work, and some Republican lawmakers had turned against Pruitt. Daily stories piled up. Some of them revealed potential violations of federal law. That attracted unnecessary attention for the agency and administration.

"At some point, once it became evident that there was some inherent corruption, his support within the executive office of the president evaporated," said a former administration official.

A former senior EPA official called Pruitt’s exit "a huge win for the Trump environmental agenda." Now, the official said, the agency can focus on that policy work, "as opposed to putting out constant or trying to put out fires around the scandal du jour."

"It has become increasingly challenging for the EPA to carry out its mission with the administrator under investigation. President Trump made the right decision to accept his resignation," Senate Environment and Public Works Chairman John Barrasso (R-Wyo.) said in a statement.

Rep. Carlos Curbelo (R-Fla.), co-chairman of the House Climate Solutions Caucus, tweeted of Pruitt’s departure: "Finally. Actually he did a horrible job. He was a disaster and an embarrassment from day one, and the country is far better off without him."

Barrasso, whose committee vets EPA nominees, said, "I look forward to the confirmation of the next head of the EPA. In the meantime, I know Assistant Administrator Andrew Wheeler is well prepared to continue the progress already made under President Trump."

Senate confirmation of a Pruitt replacement is far from a sure thing. Under Trump, EPA has been one of the most polarizing agencies in the federal government. Wheeler was confirmed in April on a 53-45 vote for the deputy slot, but the EPA chief is another matter — particularly with the midterm elections looming.

Wheeler is likely to be the acting EPA administrator for a while and eventually could be Trump’s nominee.

Trump’s priorities for the agency, like cutting the budget and downsizing big environmental rules, aren’t expected to change under Wheeler. But the execution could, and some expect Wheeler to be more effective than Pruitt.

A former aide to Sen. Jim Inhofe (R-Okla.), Wheeler is seen as a workhorse. That contrasts to former attorney general Pruitt, who wasn’t steeped in environmental policy or issues like past administrators. Many thought his policy announcements were designed to attract a grander stage, as many believed Pruitt was constantly campaigning for an eventual political run in Oklahoma.

"I think Pruitt has been a little clumsy on some things. The way they went ahead on the secret science proposal, I think they went ahead with that before it was really thought through," said Jeff Holmstead, a former EPA air chief under President George W. Bush. "In that regard, Andy is not going to be thinking about the next thing he can announce at the Heritage Foundation."

Wheeler did a stint at EPA before the Trump administration (he focused on toxic chemical regulations in the 1990s), and he has made inroads this year with some career staff members who perceived Pruitt as an enemy.

"He’s getting the people-to-people stuff really well," a career EPA employee said of Wheeler. "He has been miles apart from how Pruitt behaved in the building."

Deregulation proponents see an opportunity for greater success under Wheeler.

"In some ways, I think because of all the controversies and the way he dealt with issues, if anything, it’s kind of slowed EPA down," said Holmstead, now a lawyer at Bracewell LLP. "Nothing really happened in the first year, because they didn’t have people in place. Now they have their team."

Repealing and potentially replacing the Clean Power Plan, nixing the Waters of the U.S. rule, and other major policy pushes will likely remain on the same course, industry sources said.

"We do think Andrew Wheeler will have the same agenda as Pruitt," said Michelle Bloodworth, chief operating officer with coal industry group the American Coalition for Clean Coal Electricity. "We think that things are going to move forward like they have in the past."

Some view Wheeler as less likely than Pruitt to want to attack EPA’s endangerment finding on greenhouse gases, the scientific finding that underpins the agency’s climate rules.

Pruitt repeatedly touted plans to launch a "red team" effort to poke holes in mainstream climate science. One former Trump administration official said of that idea, "I don’t think it ever had legs to begin with. It probably has less now."

Wheeler could also be tested on climate. Myron Ebell, director of the conservative Competitive Enterprise Institute, said his group will use Pruitt’s departure and Trump’s nomination of a new Supreme Court justice to challenge the endangerment finding. EPA is moving toward drafting a replacement for the Clean Power Plan in what would amount to a concession by the Trump administration that the agency has the authority to regulate carbon.

"It’s not clear to me how far they’re willing to go," Ebell said. "It is useful to consider that two people Andrew has worked for, [Murray Energy Corp. CEO] Bob Murray and Sen. James Inhofe, have called for the reopening of the endangerment finding. Whether Andrew is on board or not I don’t know, but I assume he’s on board with their thinking."

Wheeler has criticized the finding in the past. He was quoted on his former law firm’s website suggesting in 2010 that the finding was vulnerable to legal challenges. But Sen. Tom Carper of Delaware, the top Democrat on the EPW Committee, said early this year that Wheeler "assured me that he views EPA’s legal authority to regulate greenhouse gas emissions, which is based on the endangerment finding, is settled law" (Climatewire, Feb. 8).

Structural changes at EPA that have riled Trump’s critics in the science community will likely find support under Wheeler. That means that the overhauling of independent science panels that advise the agency will stay in place. The same goes for prohibiting "secret science" — studies without publicly available data — from being used in crafting EPA regulations. Scientists have pushed back against the effort, saying it would invalidate important research and run up against medical privacy laws.

Pruitt becomes the second EPA chief to leave the agency in a swirl of scandal.

Reagan ultimately chose to replace Gorsuch with William Ruckelshaus, EPA’s first administrator, in an attempt to revive the agency. That kind of concession is unlikely to happen this time, according to two former EPA administrators, both Republicans.

"Policy is determined by the president, and he wants to dismantle the agency," said Christine Todd Whitman, who led the agency under Bush. "You have to worry we’re going to get more of what we’ve been getting."

William Reilly, an administrator under President George H.W. Bush, said Pruitt’s departure may make it easier for Trump to pursue his deregulatory ambitions.

"To the extent it was possible to equate the misbehavior with the regulatory decisions, that was helpful to those of us who did not agree with the course he was taking on a regulatory front," Reilly said.

But environmentalists are chalking up Pruitt’s exit as a win, even as they gear up to fight Wheeler in his place.

"I’m happy. I think this is a good thing for Americans," said John Walke of the Natural Resources Defense Council. "I just don’t think that Scott Pruitt had any business being the head of the EPA, so I think it will be a better agency without him."