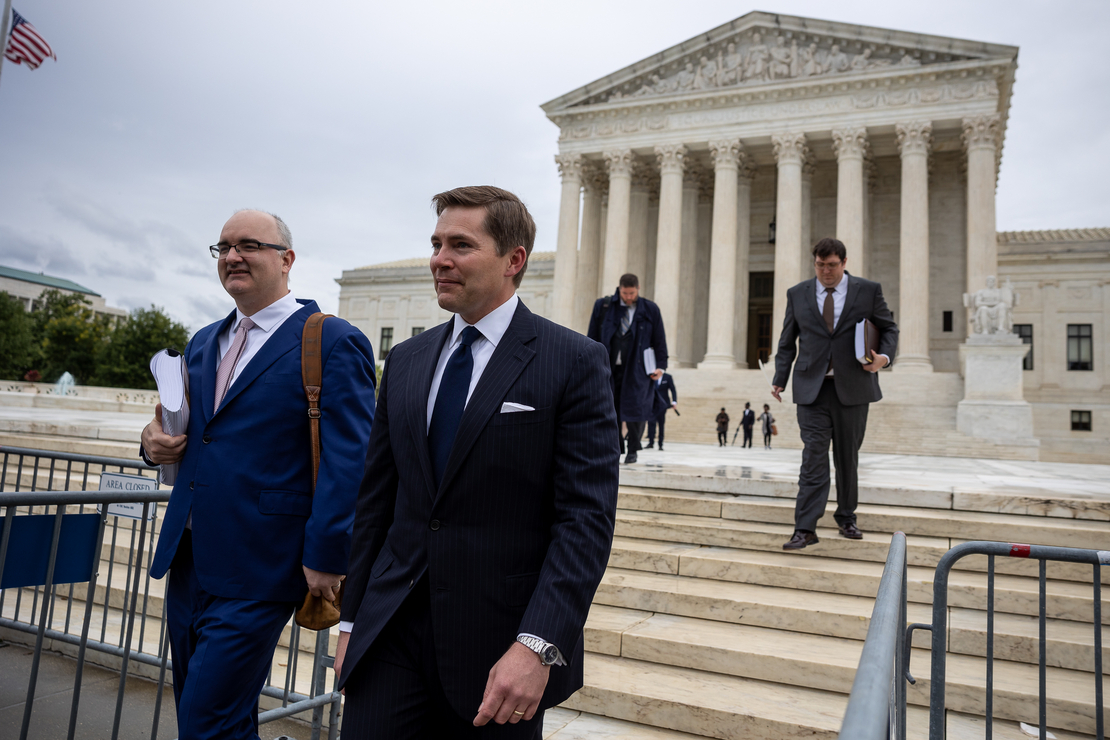 The Supreme Court is grappling with whether a new test is needed to best identify federally protected waters — a thorny issue that’s triggered decades of shifting rules, lawsuits and intense lobbying among developers, farmers and environmental groups.

Oral arguments Monday in Sackett v. EPA centered around the case of two Idaho landowners, Michael and Chantell Sackett, who argued that applying a more narrow reading of the Clean Water Act — one posed by the late Justice Antonin Scalia in the splintered 2006 decision in Rapanos v. United States — would relieve them of EPA’s insistence that their land near Priest Lake contains a federally protected “water of the U.S.” or WOTUS (Greenwire, Oct. 3).

The justices during the two-hour argument homed in on the question of whether a wetland on the Sackett property is “adjacent” to a lake located about 300 feet from their land — and therefore subject to federal jurisdiction. Even some of the court’s conservative justices appeared to think it was.

But conservative and liberal justices also wondered whether EPA and the Army Corps of Engineers could do a better job of providing clarity on the limits of the Clean Water Act’s reach and whether former Justice Anthony Kennedy’s complementary Rapanos standard — the significant nexus test — was specific enough.

“So is there another test? Not the Rapanos test, not the adjacency test, not the significant nexus test,” Justice Sonia Sotomayor, a member of the court’s liberal wing, told Brian Fletcher, a Justice Department attorney representing EPA in the Sackett case. “But is there another test that could be more precise and less open-ended than the adjacency test or the significant nexus test that you use?” she asked. “Is there some sort of connection that could be articulated?”

The proposition of a new approach to defining the Clean Water Act’s scope is haunting to some attorneys who work with regulated entities and have already spent decades trying to get a grip on the bounds of the statute.

“All of this to me just signals further uncertainty for the regulated community, and as someone advising clients on how to get their projects permitted, the thought of the court trying to come up with a ‘third test’ frankly makes me cringe a bit,” said Ashley Peck, a partner at the firm Holland & Hart LLP.

Arguments Monday in Sackett revealed long-standing fractures among the nation’s highest bench over the difficult task of identifying both the boundaries of wetlands and when they fall under state or federal oversight.

The majority of justices appeared skeptical of arguments from Damien Schiff, senior attorney with the Pacific Legal Foundation, that wetlands on the Sackett property are not adjacent to Priest Lake because there is a roadway between the two. Before the road was built, the property was part of a larger wetlands system known as the Kalispell Bay Fen.

Justice Brett Kavanaugh, a member of the court’s conservative wing, pressed Schiff to explain why EPA and the Army Corps, under both Republican and Democratic administrations, had determined that wetlands were considered “adjacent” to navigable waters — even if they were separated by berms, dunes or human-made levies.

But the justices also struggled with the ambiguity entangled in Kennedy’s significant nexus test, which federal agencies employ to regulate wetlands that are not adjacent to traditionally navigable waters.

While adjacency determinations have long been settled, conservatives have been skeptical of Kennedy’s approach in Rapanos, preferring a test more aligned with Scalia’s narrower “continuous surface water connection” standard.

Some justices even pushed Fletcher, the EPA attorney, for answers about where the term “significant nexus test” came from and what it entails.

Fletcher said EPA and the Army Corps, which have more than a decade of practice applying the test, consider things like distance to the tributary, distance to the downstream traditional navigable water, the volume of the flow, the hydrology of the area and the presence of other wetlands.

Jon Mueller, vice president of litigation at the Chesapeake Bay Foundation, said he hopes the justices leave that approach intact.

“A new test would only set the agencies and regulated entities back and start a new round of litigation with courts interpreting a new test yet again,” Mueller said. “The Rapanos decision is exhibit A.”

‘How much adjacency is adjacent?’

Justice Neil Gorsuch during the Sackett arguments leaned on Fletcher to provide hard-and-fast rules that a “reasonable person” could use to determine if their property is adjacent to a navigable water and therefore needed a Clean Water Act permit.

Gorsuch at one point said he wanted to understand “how much adjacency is adjacent,” noting that there’s a subdivision between the Sackett property and Priest Lake.

“If the federal government doesn’t know,” Gorsuch said, “how is a person subject to criminal time in federal prison supposed to know?”

Fletcher said attempts by the Obama administration in 2015 to codify “bright-line rules” for defining what qualifies as a WOTUS were met with pushback from the regulated community and the courts.

He added that similar criticisms of uncertainty had been raised in response to the multifactor test the Supreme Court put forth in the 2020 case County of Maui v. Hawaii Wildlife Fund that helps EPA determine when groundwater pollution — which is typically regulated by states — is subject to federal permitting.

“The court recognized that sometimes Congress gives us laws where the text isn’t susceptible to bright-line rules,” Fletcher said. “I think adjacency is one of those.”

Fletcher said the significant nexus test comes into play when a wetland is not adjacent to a traditionally navigable water, but conceded it’s “difficult to say that there’s one single bright-line answer” when it comes to wetlands near tributaries of such navigable waters.

“The agencies are taking comment on this and are considering whether there are things that they could do to provide greater clarity to the regulated public on all parts of the test, including adjacency and significant nexus,” said Fletcher, referring to EPA’s ongoing work to craft a new definition of WOTUS before the end of President Joe Biden’s tenure (E&E News PM, Sept. 14).

Justice Elena Kagan also raised questions with Schiff, the Sacketts’ lawyer, about the issue and whether a new way of making determinations was possible.

Kagan pointed to the example of the creation of a dam, which she said “breaks up any idea that there is a continuous surface connection.” She asked Schiff if there was a test that could be used that would not align with the Sacketts’ proposal for identifying WOTUS but also avoid the pitfalls of the Kennedy test.

“If I’m … thinking, ‘That looks pretty adjacent to me,’ but, on the other hand, I’m thinking of some of the objections that you have as to the Kennedy test, you know, what do I do from there?” Kagan asked. She added: “Is there a third option?”

Schiff responded by pointing to the Sacketts’ argument and the lack of any surface water connection.

Toward the end of the Sackett argument, Kagan asked Fletcher if EPA and the Army Corps are planning to issue a rule to codify the definition of “adjacency.”

Fletcher responded that the agencies are still deliberating and had not yet decided on a final rule.

“I will say they’ve sought comment on how to … crystallize this significant nexus test and the adjacency framework that it is a part of,” said Fletcher, adding that the Biden administration’s proposed rule is currently with the Office of Management and Budget.

A final rule, he said, is expected by the end of the year.

Legal observers largely agree that the Supreme Court’s ruling in Sackett is likely to throw a wrench into the Biden administration’s plans to craft a WOTUS rule grounded in the significant nexus test. Regulated entities are expected to sue to strike down the regulation — especially if it is inconsistent with the court’s decision in Sackett.

Peter Hsiao, a partner at the firm King & Spalding LLP, said the justices during the Sackett arguments appeared to struggle to identify the authority that underpinned Kennedy’s significant nexus test. Fletcher at one point told Kagan that the test originated from the Supreme Court’s own past rulings.

Hsiao said that “the inability to cite actual language of the Clean Water Act [for] significant nexus, I think, was troubling to some justices,” and he noted that the justices repeatedly returned to the inability of landowners to identify what wetlands are federally regulated. A statute with criminal sanction ultimately needs to be more clear, said Hsiao.

There may be an ongoing effort, Hsiao added, to get to five votes by persuading Chief Justice John Roberts and Kavanaugh through some sort of “compromise” between those who don’t think there’s sufficient statutory backing for the significant nexus test and those who think the language of the Clean Water Act supports such an interpretation.

“I think what they’re talking about is, can they find their way to a compromise, something that’s more definite than a multifactor significant nexus test that would put a regulated party on reasonable notice” that their property is federally regulated, said Hsiao.

Stephen McCullers, an attorney with the firm Morris, Manning & Martin LLP, said the justices did not appear to favor the Sacketts’ argument that only wetlands with a continuous surface water connection to traditional waters should be subject to federal permitting.

But McCullers said he does foresee a Sackett ruling that placed some additional restrictions on the Clean Water Act.

“I do believe the court will adopt a wetland test that results in less wetlands being subject to federal jurisdiction than under the current test,” he said.