Scramble on to replace Kamala Harris in the Senate 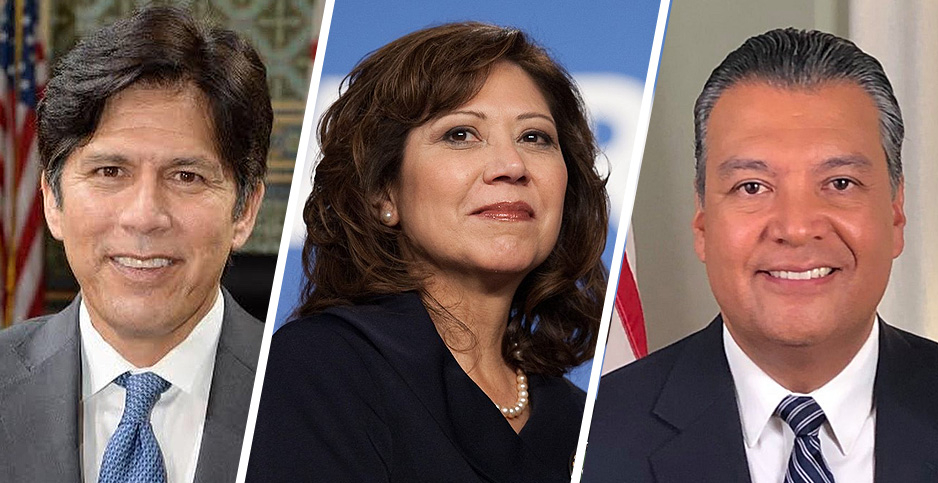 Gov. Gavin Newsom (D) will appoint someone to the seat and potential choices include prominent players, who would stand to become Democratic stars if selected.

Numerous interest groups have been lobbying since Biden named Harris as his running mate. Those groups now will push harder for their favored choices, analysts said.

"Everybody who has some special thing they want is going to be in there," said Darry Sragow, political strategist and publisher of the "California Target Book," a nonpartisan political guide. "The number of voices who are trying to get his ear about this is infinite."

California, the nation’s most populous state with 40 million residents, has offered few opportunities for politicians eyeing a Senate seat.

Sen. Dianne Feinstein (D-Calif.) was elected in 1992, along with former Sen. Barbara Boxer (D-Calif.). The latter held her Senate seat until retiring in 2016. Harris then won election.

Contenders are trying creative means of gaining publicity. Garry South, Democratic strategist who’s previously advised Newsom, said when he’s quoted in news reports naming potential Harris replacements, "I start getting calls from other Democrats" asking "next time you talk to a reporter, could you mention my name? Three people have done that." He didn’t say who.

The seat Harris holds is up for election in November 2022. Newsom could appoint a "place holder" and allow an open race for the seat in two years.

But analysts believe that’s unlikely, arguing Newsom will want to make a historic choice in naming a replacement.

As San Francisco mayor in 2004, Newsom ordered the city clerk to issue marriage licenses for same-sex couples, when it wasn’t legal in the state. Soon after he took office as governor in 2019, Newsom placed a moratorium on use of the death penalty in the state.

"Newsom is someone who likes to make history," South said. "He doesn’t shy away from things that are controversial."

Two ways to make history with the Senate appointment are to name the first Latino senator from California or the first one who’s openly gay or lesbian, several analysts said.

Potential picks who are Latino include state Attorney General Xavier Becerra, who was a congressman from 1993 to 2017 and chair of the House Democratic Caucus from 2013 to 2017; Secretary of State Alex Padilla, previously a state senator; former state Senate Leader Kevin de León, who ran unsuccessfully against Feinstein in 2018 and now is a Los Angeles city councilman; former Labor Secretary Hilda Solis; and Rep. Nanette Diaz Barragán.

Robert Garcia, mayor of Long Beach, is Latino and gay. He also was an early supporter when Newsom ran for governor in 2008, South noted.

Newsom later backed out of that race to let former Gov. Jerry Brown (D) run again. The state’s current Senate president pro tempore, Toni Atkins, is a lesbian. The Democrat is also seen as a leader on environmental issues.

Newsom aides did not respond to several inquiries about the Harris replacement. But a leading environmental advocate, who asked not to be identified to speak freely, said Padilla and de León are said to have the edge.

Padilla, when he was in the state Senate, carried 2014 legislation that banned single-use plastic bags in California. It was the first state in the nation to take the action.

He also wrote laws that increased renewable electricity mandates and reserved billions of dollars for low-income residents from the state’s greenhouse gas market.

"Newsom has not been as aggressive as he needs to be on climate issues," the environmental advocate said. "De León has been pushing him to do better."

However, the green advocate said, "the money is on Padilla. A lot of people think that’s the way Newsom will go."

Given that, he needs to appoint someone who’s taken progressive positions, said RL Miller
, founder of Climate Hawks Vote and a Democratic National Committee delegate.

She’s opposed to Becerra because, while he "has done a lot of good in terms of fighting back against [President] Trump" with lawsuits, Becerra has not sued Exxon Mobil Corp. for its alleged role promoting false information on global warming while it knew for decades that the science was factual.

"We’re looking for someone with real political courage," Miller said.

South, the Democratic consultant, argued Becerra has been progressive and that "when you have a Senate appointment coming around like this … the knives are going to be out."

Miller said she’d like to see a person of color in the Senate seat. Possible options, she said, include Reps. Karen Bass of the 37th District, Barbara Lee of the 13th District, Ro Khanna of the 17th District, Ted Lieu of the 33rd District, and Barragán of the 44th District. All of those people represent safe blue seats, Miller said, where a Democrat would be elected as a replacement. When a House member leaves, a special election is called.

Sragow, the "CaliforniaTarget Book" publisher, said he believes it’s highly likely Newsom will pick a person of color, as two-thirds of California residents fall into that category. State residents are about 39% Latino, 15% Asian, 6% African-American, 1.2% American Indian or Pacific Islander, and 5% two or more races.

As Feinstein is 87 years old, "you could make an argument [Newsom] should appoint someone young because we need a new generation of leaders in Washington," Sragow said.

If Newsom picked someone who is 40 to 45 years old, "they’re going to go another 30 years" in the seat, Sragow said.

A poll released Thursday from the USC Schwarzenegger Institute of State and Global Policy revealed voters’ views on filling the seat. More than three-fourths said they wanted "a fresh and new voice in politics," as opposed to someone with "decades of experience in politics."

Those surveyed were asked in one or two words to name the most important issue facing California right now. Top answers included wildfires, climate change and the environment at 24%, COVID-19 at 15%, homelessness and housing issues at 10%, and the economy and jobs at 8%.

In terms of the Senate seat, three-fourths said they wanted someone "with legislative experience," while a quarter preferred a choice with "executive experience," such as a statewide officeholder.

However, after they were read a brief biography of various people and asked if they supported or opposed, Garcia topped support at 57%, followed by Bass and Padilla, each at 53%, Lee at 51%, followed by lesser support for Schaaf, Khanna and Atkins.

The poll posed the question that Newsom might make a historic choice and what characteristic they saw as most important. More than half answered that it "doesn’t matter" or they didn’t know.