Sea ice is getting younger. Here’s why that’s a big deal 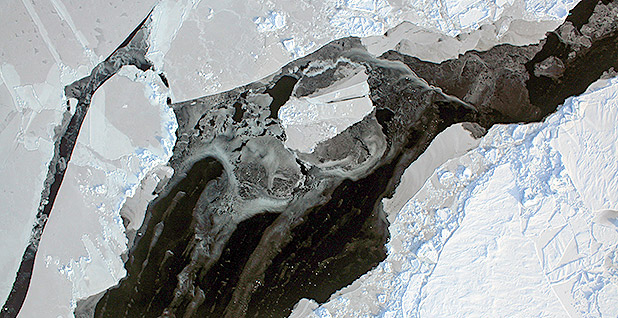 When it comes to sea ice, old age can be a good thing.

So it’s troubling to researchers that older layers of Arctic sea ice — which have persisted for multiple years in a row — are increasingly melting away.

Since 1984, the percentage of multiyear ice cover has declined from 61 percent to just 34 percent, according to a new report from the National Snow & Ice Data Center (NSIDC). And the oldest sea ice — ice that’s been frozen for at least five years — now accounts for just 2 percent of the ice cover. That means more and more of the total ice cover consists of "first-year" ice, or ice that’s only been frozen for one season.

These trends are not to be taken lightly, experts warn. When it comes to sea ice, age is far more than just a number — it’s an indicator of the ice thickness, its likelihood of melting away in warm weather, the amount of light it lets through to the ocean below, and other factors that affect the Arctic ecosystem and its resilience to climate change.

"The older ice tends to be the thick ice — and the thick ice is the stuff that can take a punch," said Mark Serreze, director of the NSIDC.

The new report also shows that Arctic sea ice hit a near-record low for the season last month. The only other year on record that saw less sea ice in April was 2016.

Each year, Arctic sea ice experiences a kind of natural flux as the seasons progress. In the winter, more ocean water freezes at the surface, and the total ice extent increases. During the warmer months, some of that ice melts away again, while some of it manages to persist through the summer and make it to the next year.

Sea ice freezes from the bottom up, so every additional winter that it persists, it gets a little bit thicker. While first-year ice is often just a few feet thick, multiyear ice can grow to be nearly 15 feet deep. Thicker ice is generally more likely to survive the summer months, while younger, thinner ice is at a greater risk of melting away entirely during the warm season.

But as temperatures in the rapidly warming Arctic continue to climb, year after year, the warm season is straining even the oldest, thickest layers of ice. And as multiyear ice disappears, and more of the total ice cover consists of thinner, more vulnerable ice, some experts worry that the Arctic is inching closer to a future in which it all melts away entirely during the summer months.

Every additional loss of multiyear sea ice "reduces the likelihood of any kind of recovery of sea ice extent in the future (because the ice that replaces the following winter … will be younger and thinner and therefore more prone to melt)," sea ice expert Andrew Mahoney of the University of Alaska, Fairbanks, said in an email to E&E News.

In fact, several recent studies suggest that year-round ice cover could be a thing of the past sooner rather than later. Last month, two separate papers published in Nature Climate Change found that failing to meet the Paris climate agreement’s most stringent climate targets could result in ice-free summers by the end of the century (Climatewire, April 3).

"At that point, when you lose all the multiyear ice, sea ice will be but a seasonal feature of the Arctic Ocean," Serreze said.

Ice-free summers, in and of themselves, are cause for concern. For one thing, year-round ice cover is important to animals like polar bears, which use it as their hunting grounds. Additionally, the less sea ice covers the surface of the ocean, the more sunlight is absorbed by the water, which scientists warn could accelerate the Arctic’s warming. In fact, experts suggest that long-term sea ice declines are already helping to amplify climate change in the Arctic.

Thinner ice layers, in addition to lower overall ice extent, may also allow more sunlight to penetrate through to the water beneath them. And as a result, the Arctic ecosystem could change in some complex ways scientists are still beginning to understand.

Some experts suggest that algae and other forms of phytoplankton in the water may get a boost from the extra sunlight. And this means certain species that feed on the algae may actually benefit.

On the other hand, if algae starts to grow too early in the season, there may be negative consequences, as well. Typically, algae blooms occur when the summer sunlight is already strong. As a result, the algae grows rapidly, and a lot of it accumulates in the water at once. Some of it gets consumed by fish and other animals swimming around in the water column, but there’s generally enough left over for some of it to fall down to the seafloor and nourish bottom feeders, such as clams and other shellfish.

But if the algae starts to grow too early in the season, while the spring sunlight is still weak, it may grow more slowly than before, Mahoney pointed out. That means more of it may be snapped up by swimming animals before it can fall to the bottom of the ocean — bad news for bottom feeders and for larger animals that feed on them in turn.

"So there’s a lot of things going on," Serreze noted — some of them with clearly negative consequences and some whose outcomes may be more complex. While scientists are still working to figure out exactly how the Arctic may change in the coming years, it’s clear that it’s already different than it used to be. And the steady loss of its oldest sea ice is one of the contributing factors.

"The moral of the story is that if you look at the Arctic — at least the Arctic of old — it would be an Arctic Ocean filled with ice of all kinds of different age classes," Serreze said. But now, he added, it’s increasingly being replaced by younger ice.

"This is part and parcel of getting warmer," he said.