Sea ice should be at its peak. It just hit a 3-year low 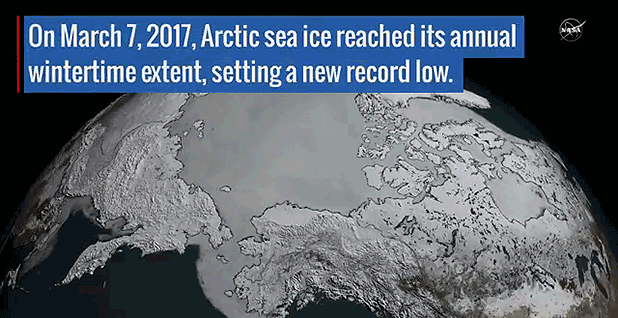 This animation shows the Arctic wintertime sea ice extent from January 2017 through the maximum on March 7. Click here to watch the video. Video still courtesy of NASA.

Arctic sea ice hit a record low wintertime maximum this month, yet another troubling sign from one of the world’s most vulnerable regions to climate change.

The Arctic’s sea ice cover at a time of year when it should be at its peak is instead 471,000 square miles below average, the National Snow and Ice Data Center (NSIDC) in Colorado announced yesterday. It is the third year in a row that sea ice has reached a record low. The sea ice is already in retreat, having reached its maximum extent on March 7 of 5.57 million square miles, the lowest in the 38-year satellite record.

What’s more, the continuing pace of transformation in the Arctic, which had three extreme heat waves this winter, will open up the region to increased energy production, military maneuvers and even tourism. The shrinking sea ice has created a need for more infrastructure in the region and increased diplomacy, according to a separate report from the Council on Foreign Relations that was also released yesterday.

The environmental shifts in the Arctic started a while ago, and the latest changes are a clear sign that climate risks could be felt across the globe if the region continues to transform at its current pace, said Ted Scambos, lead scientist at the NSIDC. The lack of ice in some areas means the melting will be more intense in the summer.

"We clearly need to change how we’re behaving and how we interact with the Earth, and it couldn’t be more plain to anybody who has visited the area, anybody who has worked in the area and spent any time learning about what it used to look like," he said, adding, "This won’t change just by taking the wait-and-see attitude."

The Arctic experienced an extremely warm autumn and winter, with temperatures 4.5 degrees Fahrenheit above average over the entire Arctic Ocean and 9 F above average in some areas. That also saw a thinner sea ice than average, according to the European Space Agency. The Antarctic, where sea ice has actually set record highs in recent years, set its lowest minimum extent ever recorded.

The rapid transformation of the Arctic has stunned even longtime researchers. It has also created a significant challenge for the Trump administration, which will have to deal with new diplomatic challenges expected to arise as the region changes. Russia has been building significant infrastructure in the region, increasing its military presence, and may work with China to exploit the new oil and gas reserves that will be opened up as sea ice retreats.

How will Tillerson handle the Arctic Council?

To keep up with other nations in the region, the United States must build deepwater ports, commission at least six new icebreaker ships to increase access in the Arctic and work with other countries in the region, including Russia, to maintain security, the Council on Foreign Relations report found. The United States must also sustain scientific research on climate change, which the Trump administration plans to cut back, to better understand future changes to the region, the report found.

"The United States needs to increase its strategic commitment to the region or risk leaving its interests unprotected," the report states.

Two more Arctic science reports are set for release next month at an Arctic science conference in Washington, D.C., focusing respectively on the changing state of the Arctic and on what its future would look like if the world implemented the Paris climate deal. The latter assumes the world keeps warming below 2 degrees Celsius as agreed to in the 2015 deal, a threshold that would nonetheless result in warming of 5 C or more in the polar North.

These reports raise the stakes for the final meeting of the U.S. chairmanship of the Arctic Council on May 11 in Fairbanks, Alaska. Advocates hope Secretary of State Rex Tillerson will preside and say some climate issues at least should be on the agenda.

Rafe Pomerance, chairman of Arctic 21, a network of nongovernmental organization scientists and advocates on Arctic climate issues, said the eight-nation council should consider what amount of Arctic warming will ultimately be acceptable.

"The sea ice kind of tells us what we need to do," he said. "This is all new territory, and the world is not responding with the urgency that’s required."

Former Secretary of State John Kerry made combating Arctic warming a key pillar of the first 18 months of the U.S. chairmanship, hosting a first-ever Glacier Summit in 2015 in Alaska, which Obama attended to build momentum toward U.N. climate talks in Paris that December. The White House also debuted an Arctic Science Ministerial in Washington, D.C., last September, which brought together a larger cohort of 20 nations to discuss Arctic issues.

You don’t ‘have to be a weatherman to see’ changes

But the Obama administration left a to-do list for the May meeting, including the question of whether to adopt a regional black carbon target, which has been the subject of two years of consultation with experts.

Advocates hope Tillerson will attend the meeting and that he’ll keep at least part of Kerry’s program.

"It took the U.S. many months to develop a strong Arctic Council agenda," said Cathleen Kelly of the Center for American Progress. "So to derail that agenda in the final hour would be completely unhelpful and unprecedented."

The May meeting is likely to line up with an ultimate decision by the Trump administration on whether to withdraw the United States from the Paris Agreement. But even if the United States remains in it, sources familiar with the administration’s deliberations say it may weaken its commitment to cut greenhouse gases between 26 and 28 percent compared with 2005 levels by 2025. That would put the agreement’s long-term goal of containing warming further out of reach.

While Kerry presided over the first three Arctic Council meetings of the U.S. chairmanship, the State Department has yet to say whether Tillerson will travel to Fairbanks in May. If he does not, it is possible that senior State Department Arctic officials David Balton and Julia Gourley would preside in his place.

The increasing warmth in the Arctic and the coming diplomatic challenges are a clear warning that we should take the region’s transformation seriously and commit to immediate action alongside other nations that border the region, said Scambos of NSIDC. He said turning things around in the Arctic will take a long time. Inaction means profound changes throughout the globe, including sea-level rise and extreme weather, he said.

"I don’t think you really have to be a weatherman to see that having a large body of open water and a large body of ice and white snow up there would have a big impact on the weather that comes out of there," Scambos said. "And, of course, lots of weather is influenced by the polar air masses, so things could get very different, and that’s why it’s worth paying attention to and worth considering how we’re going to manage things going forward."