‘Sea-level rise is definitely a factor’ in East Coast floods 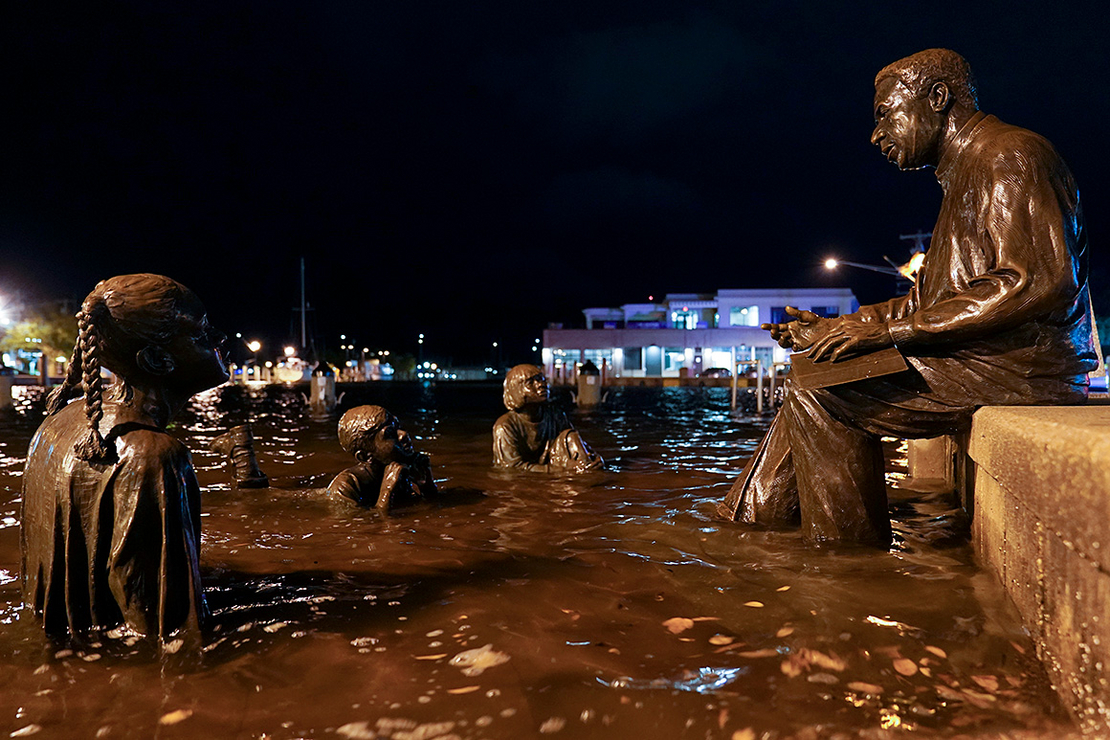 A large swath of the East Coast is bracing for some of the worst flooding in almost 20 years, raising questions about the role of sea-level rise and concerns for both coastal residents and ongoing restoration efforts in the Chesapeake Bay.

Winds that are churning and channeling water in the Atlantic Ocean northwest up through the Delaware and Chesapeake bays are expected to raise water levels up to 4 feet above average in the area through the better part of Sunday, said Connor Belak, a meteorologist with the National Weather Service in Sterling, Va.

Records have already been set at water gauges in Virginia and Maryland, and forecasters expect the city of Annapolis, Md., to register a little more than 4 feet above the highest average tide by midnight. That’s the highest water level seen since Hurricane Isabel barreled through the city in 2003, when levels reached almost 6 feet, and in 1933, when water levels reached almost 5 feet, according to NOAA.

While Belak said the flooding can be attributed to the rare occurrence of such strong winds and the geographic layout of the region, others say the role of climate change is central to what’s unfolding.

William Sweet, an oceanographer with NOAA, agreed flooding is tied to the wind and geography, noting that embayments along the East Coast facing south are receiving massive amounts of wind-pushed water. Sweet also noted that water levels are higher in the fall so certain times of year are riskier for such events.

But he also said that decades of sea-level rise are fueling the record-setting inundation. Sweet pointed out that Philadelphia is predicted to see water over 4.5 feet above average high tide, setting an all-time record with the highest water level measured in the city over the past 120 years.

“Records are going to be broken in many places,” said Sweet. ”A 30-knot wind from the south is not necessarily uncommon. They’re rare but not extremely uncommon. So to have records, second-, third-, first-highest water level of all time over 100 years, that’s very uncommon. And that’s more than just wind and geography.”

“In places like Philadelphia and places like Annapolis, it’s rising more than an inch every five or six years, but in the last 10 years and currently where now we are, it’s bouncing around that trend. We’re half a foot higher than we were decades ago,” he said. “Sea-level rise is definitely a factor in the heights of water levels that are expected.”

Sweet, who lives in Annapolis, said he’s heard from neighbors who have lived there for more than 50 years and have seen plenty of similar wind events without such extreme flooding.

“They said, ‘This is just not normal,'” said Sweet.

A ‘double whammy’ for the Chesapeake Bay

The inundation could have devastating effects on efforts to restore the Chesapeake Bay, the nation’s largest estuary.

Alison Prost, the Chesapeake Bay Foundation’s vice president for environmental protection and restoration, said the bay ecosystem is a mixture of fresh water from streams and salt water from the ocean, and that species there require a certain amount of salt. Large freshwater events like the current storm and flooding lower the salinity, throwing those species out of balance and causing stress, she added.

“It’s a double whammy for them,” she said.

Prost said that climate change is bringing stronger and more frequent storms that used to be a one-off or exception, and cities like Annapolis are considering ways to fortify the coast. Part of the problem, she said, is that many of the nation’s natural areas, like forests, wetlands and marshes, have been converted to hard sources, and there’s nowhere for the water to go. Prost said she would like to see nature-based projects like coastal restoration move forward.

During the last two decades, precipitation in Maryland has increased at a rate of 2.63 inches per decade, the Associated Press reported earlier this month, citing data from NOAA. Baltimore claimed the highest annual precipitation in the state, with 73.84 inches over the 20-year period.

The state has also seen an uptick in flooding and sea-level rise, the AP reported, with Annapolis up 0.33 millimeter between January 2000 and December 2020, and Baltimore rising from an average of negative 0.12 millimeter to 0.16 millimeter in the same period.

Robert Kopp, director of the Institute of Earth, Ocean and Atmospheric Sciences at Rutgers University in New Jersey, explained that numerous factors contribute to an increase in flooding in coastal areas.

“The long term trends, the high water levels, are caused by a combination of average sea level plus tidal variability and surge like the wind blowing water against the coast,” said Kopp, who did not specifically address the anticipated tidal flooding in the Maryland and Washington, D.C., region.

An increase in average sea-level rise can contribute to coastal flooding because it lowers the threshold needed for waters to exceed capacity, triggering more frequent “minor tidal floods” and “sunny day flooding.”

The addition of a hurricane or other strong weather system can also exacerbate those effects, Kopp explained.

“Hurricanes can move quite quickly or can linger around quite a while,” Kopp said. “If you happen to have the wind blowing against [the coast] during the high tide, then you get peak flooding.”