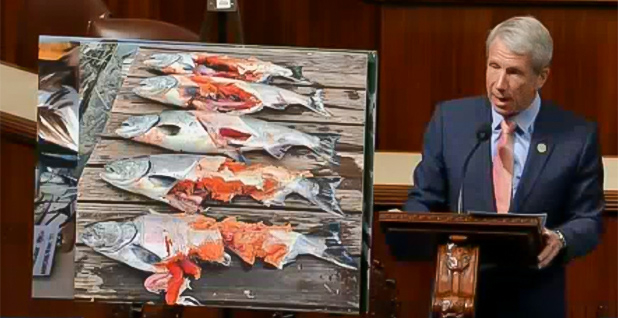 Hundreds of additional California sea lions would be put to death because they eat too many endangered salmon in the Columbia River, under a bill easily approved by the House yesterday.

The House voted 288-116 to approve H.R. 2083, which had particularly strong backing from Republican and Democratic lawmakers in the Pacific Northwest.

During a sometimes emotional debate, Herrera Beutler said backers of the bill should not be regarded as "anti-sea lion." But she argued that the forced depopulation of more sea lions is a necessary last resort to protect salmon before they go extinct.

"They’re overindulging on an all-you-can-eat buffet of salmon at numbers that are totally unnatural on the Columbia River system," Herrera Beutler said. "The sea lions are winning this battle."

Opponents said supporters of the bill were using the sea lions as scapegoats.

"We have had too many attacks on wildlife in this Congress," said Rep. Raúl Grijalva (D-Ariz.), the ranking member of the House Natural Resources Committee.

Under federal law, Idaho, Oregon and Washington have permits allowing the lethal removal of 92 sea lions each year. Backers of the sea lion bill want to amend it to allow as many as 920 sea lions to be killed annually, though they say it’s unlikely that it would be necessary to euthanize so many.

Grijalva said a tenfold increase in the killings of sea lions each year demands more scientific study before any such plan is approved.

The House voted to do just that, approving an amendment that would require the Interior secretary to report to Congress on the potential impact of the added killings on the recovery of salmon stocks.

"If we’re going to expand the lethal takings of sea lions, we should make sure it will help the salmon recover," said Rep Juan Vargas (D-Calif.), who sponsored the amendment.

The House approved one other amendment, sponsored by Rep. Derek Kilmer (D-Wash.), that would limit the application of the bill "to only sea lions, rather than all pinnipeds."

While the bill won overwhelming support from Republicans, a majority of Democrats voted against it.

The Animal Welfare Institute also opposed the bill, saying it should be renamed the "Killing Sea Lions Act."

Rep. Dan Newhouse (R-Wash.), one of the bill’s co-sponsors, said Grijalva and other opponents were engaged in "fearmongering" because the legislation would serve as "a targeted approach" to deal with sea lions and protect fish in the Northwest.

"I’m disappointed in these outlandish and false claims that the minority have propagated," he said.

Backers of H.R. 200, a bill that would overhaul the Magnuson-Stevens Fishery Conservation and Management Act of 1976, will have to wait for a vote until after the July 4 recess.

The bill, which would shift more control of U.S. fisheries to state and regional officials, had been expected to hit the House floor this week.

Sources said the delay was caused by scheduling issues, not by any particular problems with the legislation.