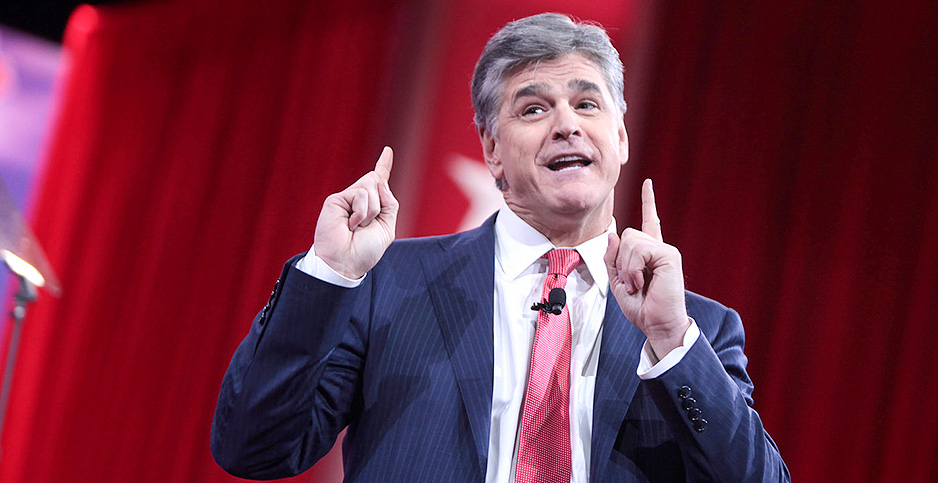 EPA officials asked Sean Hannity to hop into a jet with agency chief Scott Pruitt when he barnstormed farming communities to promote changes to a water pollution rule.

The Fox News host ultimately didn’t join Pruitt for a jaunt across Oklahoma to talk about the Waters of the United States rule, emails shared with E&E News by the Natural Resources Defense Council showed. But the communications, obtained via Freedom of Information Act request, shed more light on EPA’s media strategy.

"I wanted to reach out to see if Mr. Hannity would be interested in traveling with Administrator Pruitt this week to Oklahoma. It is part of our State Action Tour and we will be visiting with a rural farming family who has been affected by the WOTUS rule," EPA communications aide Lincoln Ferguson wrote to Fox News’ Francesca Nestande on July 23, 2017.

Nestande responded asking for more details about the trip. Ferguson responded that Hannity "would need to fly into Tulsa and then can ride with Administrator Pruitt in a jet from Tulsa to the OK panhandle." Nestande replied saying Hannity couldn’t make the trip work.

"Mr. Hannity did not join EPA on our WOTUS tour," EPA spokesman Jahan Wilcox said today in a statement. "Had he joined us, Fox News would have been subjected to the same rules that requires media to pay for their own travel costs when flying with government officials."

Asked who owned and operated the jet, Wilcox pointed to past reports that included a memo from EPA’s acting principal deputy general counsel, Elise Packard, approving a $14,285.71 chartered jet for the trip.

Pruitt’s media approach has drawn scrutiny, including from Congress. He’s been accused of abusing FOIA laws by allegedly directing staff to prioritize responses to requests for public documents from the Obama administration before processing those regarding his own tenure — despite the ability to evaluate more significant and substantive requests more expediently (Greenwire, June 11). Pruitt’s public affairs team also has shut reporters out of events, curated availability for what they consider friendly press outlets, and refused to announce where and when Pruitt will appear in public.

Many of those traits were on display when Pruitt toured states to talk about his plans to roll back Obama-era water rules that have agitated farmers and homebuilders (Greenwire, Jan. 25).

"We don’t publicize the Administrator’s visits and we don’t publicly announce them, and would ask that you all refrain from doing so also," then-EPA spokeswoman Liz Bowman said in an Aug. 2, 2017, email to Stephanie Groen, director of state-federal relations for Iowa Republican Gov. Kim Reynolds.

A Nov. 1, 2017, exchange between Laura Campbell and Sara Miller of the Michigan Farm Bureau that copied Elizabeth "Tate" Bennett, EPA’s head of public engagement, outlined conditions on Pruitt’s appearance at a scheduled event there:

Bennett asked that the Michigan Farm Bureau "Not advertise his presence in advance of the meeting. I told her we could announce him as a special surprise guest during President’s Lunch, and invite the non-delegates to ‘pack the house’ in the observation areas to see him, and that we could add it to the event app on the day of his arrival," Campbell wrote. Bennett also "asked for no press during his remarks on delegate floor, which I told her I thought we could do, especially since he’s willing to do a (limited) press thing separate from his time before the members," according to Campbell.

The emails also highlighted EPA’s attempts to score coverage with the TV networks outside of Fox News.

"Following up on this. I know it’s last minute but wanted to let you know the offer still stands," Ferguson wrote on July 25, 2017, to CBS News correspondent Major Garrett to see if he wanted to join Pruitt on his WOTUS visits.

"Quite sure you got my response last week," Garrett responded. "Let’s touch base today to explore other options."