Seattle shows why curbside charging is so hard 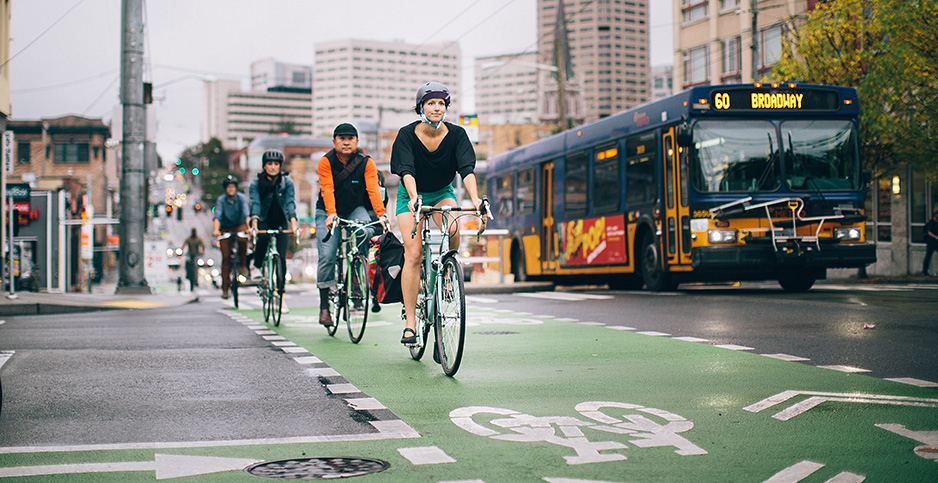 Seattle city planners were caught off guard when bicyclists sought to kill a proposed charging station in the Capitol Hill district. The charger would sit at the terminus of Broadway’s green-painted bike lane, in the way of bikers. Adam Coppola Photography/Flickr

First in a multipart series

In 2017, Seattle got out in front of other climate-conscious cities with a big goal: It would build lots of electric vehicle charging stations on public curbs.

That goal was remarkable because most cities had never tried to build even one. EV chargers are usually located in home garages and in parking lots, not in the public right of way where drivers, delivery trucks, cyclists and pedestrians are all jostling for space.

Seattle had a particular user in mind — apartment dwellers whose car lives on the curb. If a charger could be built for them, maybe they would buy electric cars and help the city reach its ambitious plan to reduce emissions.

The two-year project started in 2017, with twin goals of building 20 public fast-chargers and permitting them to be built on curbs. The pilot ends this December. How many curbside chargers has Seattle actually built?

As Shannon Walker, who spearheaded the program for the city Department of Transportation, put it at an EV conference this summer, "We learned a lot that we really didn’t know before we decided to put chargers there."

The difficulties that Seattle encountered offer a cautionary tale for other dense cities that want to wring emissions out of vehicles on their streets. What was intended as a simple process to build charging stations for electric cars turned into a bureaucratic morass that rubbed a lot of people the wrong way.

One example is Capitol Hill, a central neighborhood where the city proposed a pair of curbside fast-charging stations. The site seemed to have a lot going for it.

The chargers were to sit on Broadway East, a busy street lined with apartment buildings. Just a block away is the stairway to the underground electric light rail, and across the street is a stop for the electric trolley.

In Seattle, the case for electrifying transportation is stronger than anywhere else. The city’s municipal utility, Seattle City Light, receives 91% of its electricity from dams on nearby rivers. Such a clean energy supply makes vehicles the biggest polluter. To meet its climate goal — zero carbon emissions by 2050 — the city would have to move to electric cars. The City Council passed a resolution naming curbs as the place where it had to happen.

Other cities have built a few curbside chargers, including Portland, Ore.; Austin, Texas; and Sacramento, Calif., while New York City has proposed doing the same. None of them has a stronger case for EVs than Seattle.

"Seattle’s strong economy, environmental ethics and low cost of energy have created ideal conditions for the adoption of electric vehicles," the city said in its curbside plan.

But Seattle was about to learn that its curbs did not have ideal conditions for the adoption of charging stations.

"It is fairly difficult to find spots in our service territory that meet every criteria on our list," said Jacob Orenberg, a capital projects coordinator at Seattle City Light who is the point man on finding charging locations. He spends much of his days poring over Google Maps, scouting spots that could work.

"We have to look pretty carefully to find places that look good," he added.

In Capitol Hill, the site that the city chose wasn’t only the best place to put a charger. It was just about the only place.

Planners want the stations to be near restaurants and other spots where people can hang out while their EV charges. But the really hard part has to do with the city’s street rules. To meet accessibility requirements, the sidewalk has to be at least 11 ½ feet wide and the parking space 8 feet wide. Most curbs are narrower than that.

Furthermore, because the goal was not just to park but also to plug with high voltage, that side of the street had to be served by a robust three-phase power line that could handle a fast charger.

Then there’s the matter of permitting.

At the outset of the curbside project, interest was robust. A total of 68 proposals for charging stations rolled in from the city and from two charging station builders, eluminocity and Greenlots. "We estimated it would take five months and be a very simple five-step process," Walker said.

A curbside charging station would need as many as five permits. Two come from the Transportation Department, one for the right to use the space long term and another from the office that coordinates construction projects, in a city that in recent years has been in a state of constant construction. If the curb had metered parking, it needed yet another permit. Each individual plug point required an electrical permit from the Department of Construction and Inspections and a service application to Seattle City Light.

Amid this gantlet, interest vanished. "Between step one and step three, we went from 68 applications down to three," Walker said. The private companies fled completely, and the three remaining proposals were sponsored by the city itself.

In February, city planners were caught off guard when the Capitol Hill station came under attack from an unexpected quarter: bicycle riders.

The station would sit at the terminus of Broadway’s green-painted bike lane. If an electric car were charging there, it would be squarely in the way. It didn’t take long until the local bike blog condemned the idea, arguing that the station would prevent the city from enacting a long-delayed plan to extend the bike lane.

"Let’s take right of way we desperately need for buses/bikes/peds and re-purpose it for parking and a super expensive city EV station," wrote one blog commenter.

City officials held a community meeting in hopes of turning neighborhood sentiment in favor of the station, but it was too late: The neighborhood had come to see the charging station as just another congestion problem caused by cars.

"Leave it to Seattle City Hall to somehow pit proponents of electric vehicles against bicycling advocates," wrote a neighborhood blog.

In March, the city scuttled its Capitol Hill plan. Other stations fell out of favor in other neighborhoods, for other reasons. Some of the best spots were shot down by apartment occupants who didn’t want a charging station outside the window. In lower-income neighborhoods, some residents viewed the station proposals with suspicion, believing that EVs were the vanguard of gentrification that would drive them out of their homes.

Seattle still has two curbside charging station proposals in play. One is in a neighborhood called Alaska Junction, and another is just outside Capitol Hill — 14 blocks away from the Broadway site — that is the only viable block in central Seattle, said Orenberg of Seattle City Light.

Aside from those, the city has scaled down its ambition to put charging stations on the curbside. With the recent arrival of electric bike share and scooter share on Seattle’s streets, Walker said in an interview, the curb has become even more contested.

Next on the candidate list for charging stations are parking lots.

It’s a case of not-on-my-front-curb that has no easy solution.

"Seattle as a city is extremely supportive of electrification. It has very robust climate goals. At a high level there’s lots of support," Walker reflected. "Where the challenge comes in [is] the actual process to get these in and where they go."

Correction: This story was updated to clarify that the city of Seattle did not require all of its fast chargers to be built curbside.