Seaweed raises a stink on Fla. beaches: ‘Just get away’ 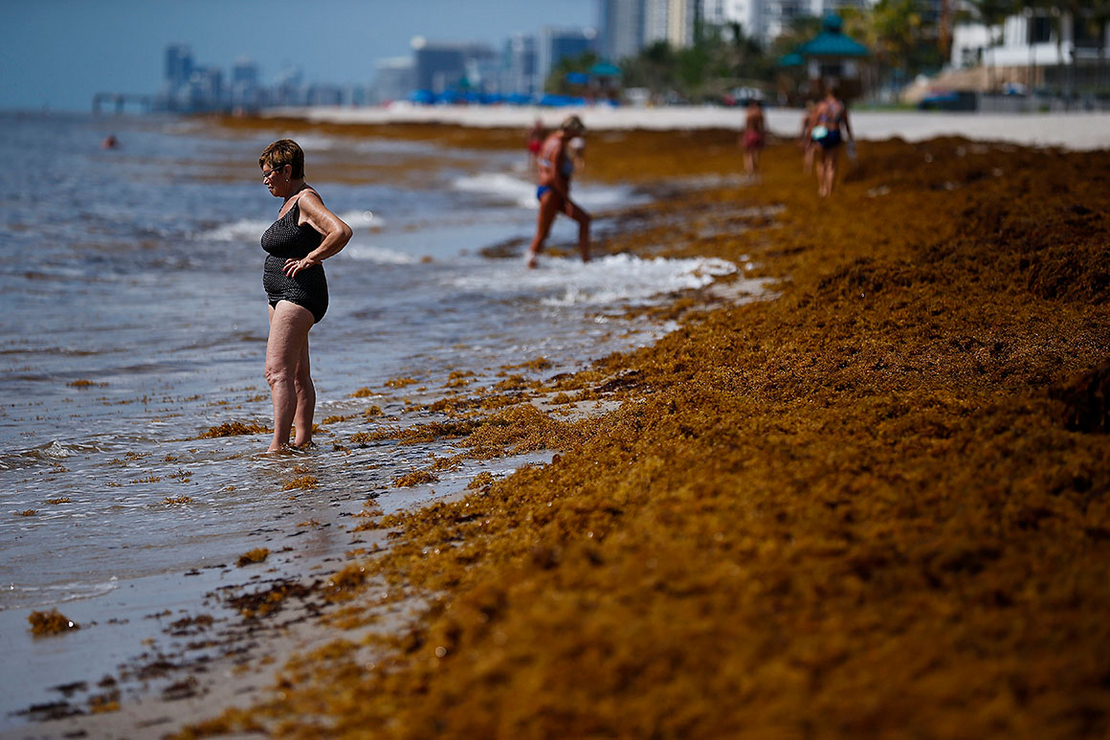 Beachgoers in 2018 picking their way past a kind of seaweed called sargassum in Sunny Isles Beach, Fla. Brynn Anderson/AP Photo

After fighting red tide for years, Florida has another nasty algal bloom on its hands.

It’s called sargassum, a nontoxic seaweed that first exploded in the Caribbean 10 years ago and now has some beaches in the Sunshine State smelling like rotten eggs.

There’s a simple reason: As the free-floating sargassum hits the shoreline and begins piling up, it attracts insects and bacteria.

Scientists say it’s best to avoid the seaweed if you spot it.

“The bottom-line message is don’t panic — this is not like red tide, it’s not toxic, but it’s still pretty bad, and if you see large amounts on the beach and it smells bad, just get away,” said Chuanmin Hu, an oceanographer at the University of South Florida College of Marine Science and the leader of a team of scientists who have been using NASA satellite imagery to track the movement of the seaweed.

In low doses, "it is a good thing for the ocean because many animals use this as habitat,” he said in an interview. “But only in recent years has Florida experienced a lot of sargassum on the beaches — and a huge amount.”

Scientists say the rapid growth of the seaweed is likely the result of warming temperatures and the increased amount of nitrogen in the ocean coming from the fertilizer runoff of large-scale agriculture operations.

“Before 2011, there was really a minimum amount of sargassum in the tropics, almost nothing, a few clumps here and there,” Hu said.

Ten years later, Hu said, this year’s amount is already about 10 times greater than what researchers found back in 2011.

Writing in The Conversation last week, Stephen Leatherman, a professor of coastal science at Florida International University, said "the scale of recent coastal influxes is unprecedented."

In his article, Leatherman recalled the scene from a decade ago when he was conducting research in the British Virgin Islands and he saw sargassum extending 500 feet offshore.

“Swimmers couldn’t get into the water,” he wrote. “Some boats couldn’t leave port. Beaches were piled with massive mounds, some nearly as tall as I was.”

He said the record year came in 2018, when NASA satellites showed “the largest marine algae bloom in the world,” a belt of sargassum that contained more than 22 million tons of seaweed that extended 5,500 miles across the Atlantic to West Africa.

While the seaweed is hurting tourism in the Caribbean, Leatherman noted that sargassum plays an important role in ocean health because it “offers food, sanctuary and breeding grounds for crabs, shrimp, whales, migratory birds and some 120 species of fish,” along with 43 threatened or endangered species.

According to NOAA, the “ecological importance” of sargassum was recognized in 2003, when it was designated as essential fish habitat in the U.S. exclusive economic zone off the southern Atlantic states. The designation gave the areas special protection.

‘You may have noticed an influx’

Parks officials began issuing advisories when the seaweed started showing up on beaches earlier than usual this year.

“You may have noticed an influx of brownish seaweed or sargassum along our shoreline in recent weeks,” the city of Miami Beach said in a springtime seaweed advisory. “While this is a natural occurrence, the city is coordinating closely with the county to do everything possible to minimize the inconvenience to our residents and visitors.”

The advisory warned beachgoers that the seaweed “is not dangerous but can cause skin irritation from the tiny sea creatures that live in it.”

Volusia Beaches posted an advisory on Twitter in May, warning that “an excessive amount of sargassum seaweed” had washed in due to heavy surf, winds and currents.

“Although it may be stinky as it begins to break down, this is how our beautiful beach naturally restores any lost elevation,” the post said. “The seaweed catches and collects the windblown sand.”

Earlier this year, Hu said, 2021 was shaping up to be “a banner year” threatening to break the 2018 sargassum record, but he’s no longer expecting that to happen after the amount of seaweed declined somewhat in July.

For cities that want to get rid of the seaweed, Hu said the only way to do it is to physically remove it, a labor-intensive and costly proposition.

According to Leatherman, it cost $45 million to remove sargassum from a 15-mile stretch of Miami-Dade beaches in 2019.