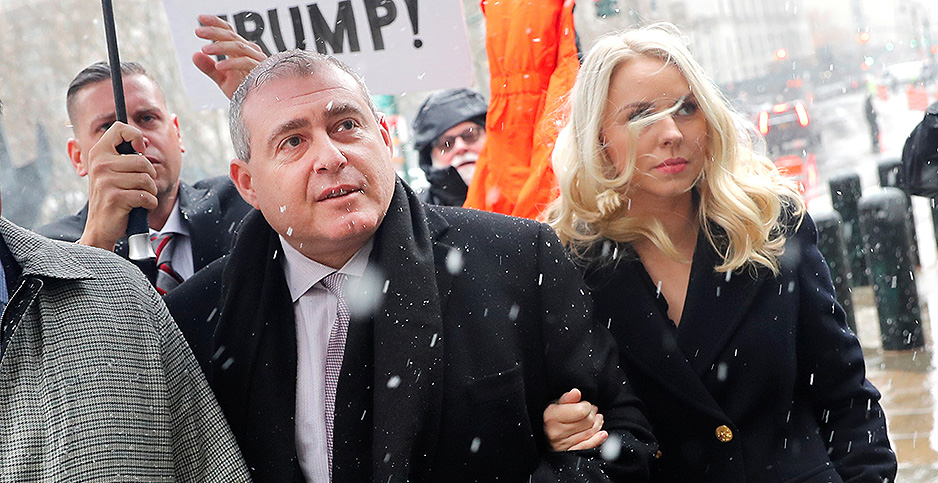 The golf prowess of North Korean leader Kim Jong Un. Kanye West’s love of President Trump. And 100-pound satchels of drugs hitting people in the head after being lobbed over the border wall.

Those were just a few of the subjects that came up during a private conversation at the Trump International Hotel in Washington in April 2018 between Trump and an intimate group of donors, including Lev Parnas and Igor Fruman, the Soviet-born businessmen who since have been charged with making illegal campaign donations.

A secret 90-minute recording of the meeting, recorded by Fruman and released by Parnas this weekend, also showed Trump was curious about a variety of energy topics, including Ukraine’s energy challenges, fracking and electric cars. Parnas also used the opportunity of dining with Trump to first push for the U.S. ambassador to Ukraine to be fired, which happened about a year later.

Here are three notable energy-related topics that were mentioned:

Just weeks before the dinner, Parnas and Fruman had formed a company called Global Energy Producers. That company was the entity the two would use to funnel $325,000 to a Trump super political action committee, America First Action. That donation is at the heart of the charges against the men.

At the dinner, Parnas laid out details about his plans to expand an energy business in Ukraine, promising to use American liquefied natural gas as a counter to Russian influence in the region.

Parnas told Trump that he was bidding for an energy company in Ukraine and that the country was privatizing one of its largest energy companies. He also told the president he wanted to do business in Ukraine, Poland, Lithuania and Turkey. He then suggested that he had a plan to provide Turkey with Ukraine’s energy resources.

"If we’re able to do what we’re doing, we’ll be able to cut off Russia at the knees and put a pipeline from Ukraine under the water and supply Turkey with energy," Parnas told Trump.

Parnas pushed for Trump to remove the U.S. ambassador to Ukraine, Marie Yovanovitch, who was known for fighting against corruption in the country.

"I think if you take a look, the biggest problem there I think where you need to start is, we’ve got to get rid of the ambassador," Parnas said.

It’s not clear that Global Energy Producers ever had business in Ukraine, or anywhere.

The company was formed shortly before it made a donation to the Trump super PAC. However, Parnas and Fruman reportedly pushed to change the leadership of Naftogaz, Ukraine’s state-owned energy company, to install someone who would be more amenable to their needs.

Then-Energy Secretary Rick Perry had explored plans to ship more LNG to Europe. One idea was to ship American LNG to Poland and then send it to Ukraine via pipeline. Perry also sought changes to the Naftogaz board and submitted a list of names to Ukrainian President Volodymyr Zelenskiy that included donors.

Trump was surprised to learn, from Parnas and Fruman, that Ukraine has substantial energy supplies.

"Ukraine has oil?" he exclaimed at one point.

Someone then said that Ukraine’s oil production is "No. 1" in Europe, which isn’t true.

Trump was then baffled why the country didn’t have more money.

"Ukraine?" Trump asked. "Wow, [how] come they’re not doing much, they don’t have any money, and why aren’t companies going in, is it too risky?"

Someone at the table said the region’s geology is similar to West Texas, which is why American energy producers were interested in the area.

Parnas told him that the country has "incredible potential" in its energy resources but that it is worried about Russia’s aggression.

"They have everything there, they’re just right now waiting for your support a little bit to make sure, because obviously if they go on their own, Russia won’t let them do it because they’ll cut off a lot of their revenue," Parnas said.

"How long will they last in a fight with Russia?" Trump asked.

"I don’t think very long," Parnas replied. "Without us, not very long. But Russia also, keep in mind, talks a big game but they’re not ready to play."

"They don’t want the electric," he said at one point. "The majority is still gas."

He also expressed what sounds like admiration for EV manufacturer Tesla Inc.’s stock prices — even as his dining companions pilloried the company and suggested it was failing.

The transportation talk began nearly an hour into the discussion when one speaker, who said he was involved with compressed natural gas, told Trump that there was a "huge opportunity" to run more cars with compressed gas. The speaker said cars powered by the fuel would help manufacturers meet emissions standards.

"We have these car manufacturers that are just standing ready, and they’re trying to figure out a way to meet emission standards," the speaker said.

"Yeah, but we’re going to lower them," Trump interjected, asking his dining companion if he was familiar with corporate average fuel economy standards, which the administration at the time had decided to relax.

"Absolutely," the man said. "You’ve done a great job on that."

But the man continued to make a pitch for compressed natural gas "to be on parity" and added that "unlike electric vehicles, we don’t want any tax credit."

Trump, who last December blocked the extension of the EV tax credit, at one point during the 2018 dinner conversation asked how electric cars were "doing now." His dinner companions told him "not good."

When Trump raised Tesla as a possible success story, another attendee said, "No, Tesla’s broke, 100%." And another speaker insisted the company was "shutting down the line of the most popular car."

But Trump asked why the Tesla stock price was so high, noting its "stock is still doing very nice."

His dining companions suggested it’s because CEO Elon Musk was a "great salesman" and that "the millennials are buying."

Trump last week at the World Economic Forum annual meeting in Davos, Switzerland, told CNBC that Musk is "one of our very smart people, and we want to cherish those people."

At one point in the dinner, Trump asked the attendees whether aluminum in their trucks is strong enough and whether it’s more likely to dent.

Trump has argued that automakers often achieve increases in fuel efficiency by reducing the weight of their vehicles, which makes them less safe.

But others have said that as companies have switched from heavy materials like steel to light materials like aluminum, their safety rating from the National Highway Traffic Safety Administration has increased.