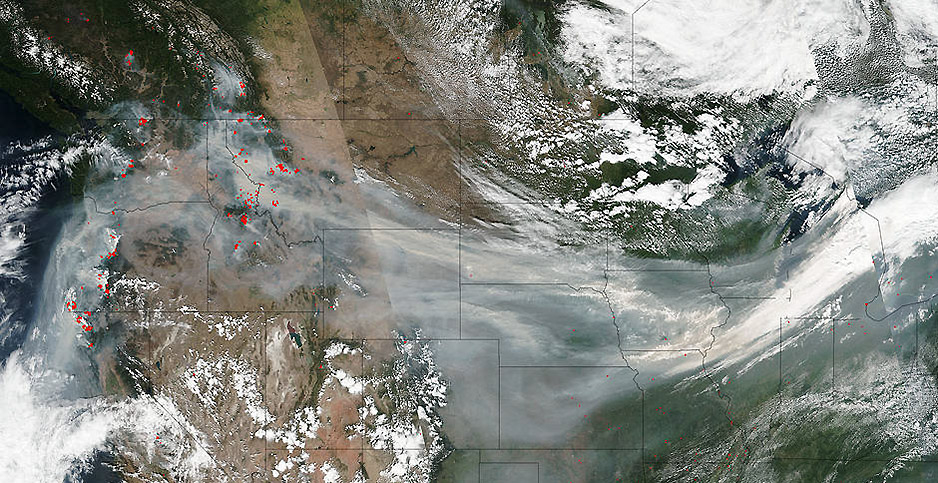 Smoke from Western wildfires travels across the United States in this image captured in 2017 by a NASA satellite. NASA

Scientists have begun to penetrate a mystery of climate change: the effects of smoke from forest and agricultural fires on the future warming of the Earth and how it influences the behavior of clouds.

Using a more precise detection technique to measure aerosols — or the suspension of fine particles of black carbon and other residues from the blazes — researchers discovered a thin screen of what they call "old smoke" hanging over some of the planet’s most remote areas, including Antarctica and the Southern Ocean.

The smoky screen, containing on average a fifth of the atmosphere’s aerosols from fires, distorts the effects of sunlight reaching the Earth. But whether it will warm or cool the planet’s surface in the future remains unknown.

"The simple message is that smoke is more pervasive than we thought almost everywhere," explained one lead researcher in the study, Gregory Schill.

The more complicated question is what the effect will be in the future when a warming planet coupled with more droughts is expected to increase the volume of forest fires in many regions, said Karl Froyd, a second researcher.

In a study that resulted from a series of four seasonal pole-to-pole flights in an instrument-packed NASA DC-8 in 2016 and 2018, the two researchers along with 11 others were able to identify and measure the smoky screen. It’s too dilute to be seen by space satellites.

Their study, sponsored by NOAA, was published last week in the journal Nature Geoscience. It concluded that the thin screen of smoke hanging in the troposphere, which extends to about 6 miles above the Earth, dims the sunlight reaching the planet.

The total dimming from this widespread but dilute smokescreen is roughly equivalent to the dimming caused by all the thick, visible smoke plumes emitted from fires.

Schill and Froyd, both of whom work for the Cooperative Institute for Research in Environmental Sciences — a partnership between NOAA and the University of Colorado, Boulder — used a 500-pound laser-equipped mass spectrometer to detect the ingredients of the smoke.

The measurements will fill a void in climate models, and may lead to a clearer understanding of smoke’s future effects.

"This is really interesting and somewhat complicated," noted Schill.

Plumes of smoke near a forest fire are thick and black, which means they can absorb more sunlight and warm the Earth. Smoke also contains "white" material that reflects sunlight back into space, contributing to a cooling effect.

As smoke ages and is transported globally, the net effect can be either warming or cooling, depending on the smoke’s altitude and the brightness of the underlying land or sea surface.

Scientists aren’t sure how long the smoke from specific forest fires and crop burning may linger in the atmosphere. Schill estimated the smoke’s life may be as long as 30 days.

After that, a bigger mystery emerges because the airborne smoke particles function as "seeds for clouds." Water droplets in the atmosphere form on the particles, and the result is white clouds that grow and create both shade and rain, which falls back to Earth.

"The aerosol cloud effect is the largest uncertainty in our current understanding of the climate system, and depending on where the clouds form — whether at low altitude or high altitude — they can either have a net warming or a net cooling effect," said Froyd.

But the result of the research, he added, is a more complete data set that may help climate models shed light on the process. "What we’re able to do is to train these models to be better predictors."