Seeing the trees in 3-D, a ‘game changer’ for forest policy 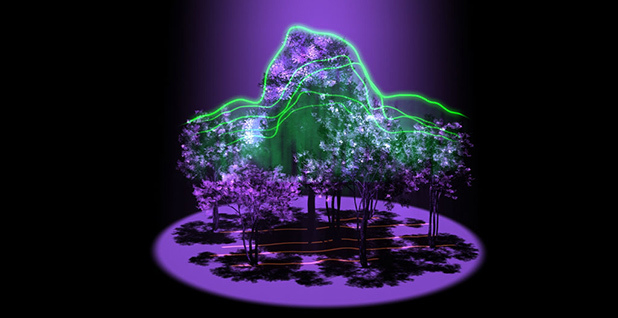 GEDI, a NASA Earth-observing system set to go on the International Space Station in 2018, will enable the government to understand the architecture of forests, as this 3-D rendering depicts. By fully analyzing the structure of forests, researchers will be able to more accurately measure the amount of carbon they store. Photo courtesy of NASA.

In 2018, America’s space agency, in collaboration with the University of Maryland, is going to send a laser into the galaxies to assess the world’s trees.

It won’t be the first time NASA dabbles in lidar technology — shooting lasers onto things and recording what comes back — but it will be the first time the agency sends a laser specifically designed to measure the intricate structure of forests.

The goal of the mission, fittingly named GEDI, an acronym for Global Ecosystem Dynamics Investigation lidar, is to map forests trunk to canopy — or, to put it another way, to measure the volume of the world’s forests and visualize them in 3-D.

By combining data on how much carbon is stored in wood with GEDI measurements, researchers are hoping to compile a solid estimate of the carbon stored in forests for the first time.

"It will absolutely be a game changer," said Laura Duncanson, a postdoctoral fellow at NASA’s Goddard Space Flight Center who works on the GEDI team. "Lidar is the only technology that can penetrate the forest floor and estimate carbon."

Globally, forests are estimated to suck up between 10 and 14 percent of current gross emissions. The activities of the land-use sector, which includes forests but also agriculture and land-use changes, account for about 24 percent of global greenhouse gas emissions. Many researchers who tally emissions have conceded that the world has little chance of keeping warming below the agreed 2-degree-Celsius threshold without the carbon sequestration of forests.

But not all forests are created equal in their carbon-storing abilities. Furthermore, as forest-rich nations consider how to meet their climate goals set forth at the Paris climate talks late last year, understanding where and how carbon is being stored in their trees will become increasingly important.

GEDI, many hope, will unlock the next frontier of forest and carbon mapping.

Over the last few years, the forest carbon monitoring and mapping world has expanded and relatively quickly, according to experts.

The rising popularity of the U.N.-backed deforestation program, Reducing Emissions from Deforestation and Forest Degradation in Developing Countries (REDD+) has boosted demand for baseline data and monitoring of the carbon stored in the world’s forests. At the same time, computing power, the number of satellites and the cost of remote-sensing technology have improved rapidly.

"Technology has allowed us to go so much further," said Nancy Harris, research manager for the World Resources Institute’s online, interactive forest data program, Global Forest Watch. "Probably even less than 10 years ago, we were relying on FAO data reported every five years on forest biomass and area information."

Those in the forest world have long worked on measuring forests and deforestation and estimating carbon. Famously, the Brazilian government, facing troubling rates of forest loss in the Amazon in the 1980s, announced a plan in the 1990s to begin monitoring deforestation, while the authorities cracked down on those clearing the forest.

In the early 2000s, the Brazilian government introduced multiple programs to detect deforestation, including DETER, a satellite-based monitoring system that can detect changes in forest cover on a monthly basis.

Through the use of monitoring technology, Brazil’s government is credited with chopping rates of deforestation about 80 percent since 2004, although currently they are rising again.

Another tool that has long been used for visualizing forest data is Global Forest Watch. Founded in 1997, the goal of the platform, said Harris, is to demystify the data and put it into a format that decisionmakers can use. Last week, the platform announced the new GLAD (Global Land Analysis and Discovery) alert system, which detects tree cover loss in Peru, the Republic of Congo and Indonesian Borneo in less than one week.

"Global Forest Watch has made the data available to anyone with a laptop and Internet connection," said Frances Seymour, a senior fellow at the Washington, D.C.-based think tank Center for Global Development.

But the real turning point came two years ago.

How one scientist changed forest monitoring

In 2013, Matthew Hansen, a professor in the Department of Geographical Sciences at the University of Maryland, published a data set using images taken from the Landsat program, the longest-running satellite program in the United States, which has collected millions of images of the Earth’s surface.

Hansen, who also works on the GEDI team, has been long interested in remote-sensing data and using it to map large-scale land changes, especially forests.

Presented in the journal Science, the "Hansen data" was the first global forest data set that showed forest loss between 2000 and 2012 at a high resolution. Previous trends in forest change were measured using data from MODIS satellites, which have a resolution between 250 and 300 meters. Landsat 8, for example, the latest of the program to be put into space, takes images at a 30-meter spatial resolution.

Hansen and his team had been practicing on MODIS data and images from meteorological instruments. When they could afford it, they would use the finer-resolution images from Landsat satellites.

And then, eight years ago, the Landsat archive was opened up to the public due to a change in policy by the Interior Department and U.S. Geological Survey.

"The Matt Hansen data set is kind of a paradigm shift in how we monitor forests," Harris said.

Seymour added that through platforms like Global Forest Watch and with the publication of the Hansen data, now nearly all countries have access to data like Brazil did a decade ago.

"What they’ll do now in developing national monitoring systems is adjust it for the particulars in their country," Seymour said. "This data, as comprehensive and large-scale as it is, is going to make it a lot easier to set reference levels and measure forest change over time."

Hansen, for his part, sees the data slated to be collected from GEDI as the "backbone" to implementing any forest policy, whether that be mapping carbon, restoring degraded lands or protecting biodiversity.

GEDI will spend at least two years on the International Space Station. Three lasers developed by NASA’s Goddard Space Flight Center will spread across 14 paths and be able to collect data on the land between 50 degrees north latitude and 50 degrees south latitude, including nearly all the tropical and temperate forests on Earth.

"The degree to which we can manage forest resources globally, data from GEDI and other missions will be critical," Hansen said.

Although the technology has grown by leaps and bounds, there is still a need for what NASA’s Duncanson calls "professional tree huggers."

In order for carbon measurements to be accurate, someone, at some point in time, will have had to walk into a forest and literally give a tree a hug. That serves as a measure of the diameter of the tree. Then, researchers estimate the height and record its species. At some point, scientists calibrate how much carbon is stored in a species. Those data are used to help calibrate measurements taken from satellites and lidar systems.

Before remote-sensing instruments, the use of field measurements was the only tool available to try and measure forest carbon.

Today, though, by combining the two, scientists are getting much more accurate data. Still, there is a need for more field work.

"GEDI is the best new set of technology, but it’s also critically important to get better estimates of field carbon," Duncanson said.

In addition, satellites do not do a good job of measuring carbon stored below ground, such as is found in Indonesia’s peatlands, a problem scientists are working on.

Currently, research proposals are being accepted through a prize competition jointly run by the Indonesian government and the David and Lucile Packard Foundation, aimed at finding a more accurate and faster way of mapping the extent and depth of Indonesia’s carbon-rich peatlands.

Satellites also cannot tell what is causing a change in forest cover. Efforts are underway to map the land rights and boundaries of indigenous peoples through a platform called LandMark.

"There’s a growing sense that just because we have this data that doesn’t mean we should abandon hugging the trees," Seymour said, referring to field measurements. "Forest change happens not just over the biophysical realities, but through social realities on the ground."

And it’s not just NASA that is interested in upping the forest mapping technology ante. The European Space Agency is expected to launch Biomass, a satellite dedicated to mapping tropical forests in 2020. Multiple agencies have missions using radar technology also scheduled to launch.

"For so long, we’ve been limited to this 2-D view of the world, so to map the canopy structure will be really cool," Harris said. "That provides a great opportunity. If there’s only one data set, you don’t have to question what’s right, but as you have more and more data, the key will be using that data in a way to allow insight."

Correction: An earlier version of this story incorrectly stated that NASA was responsible for making the Landsat archive public. NASA and USGS are longtime partners in the Landsat program, but USGS alone manages the data.