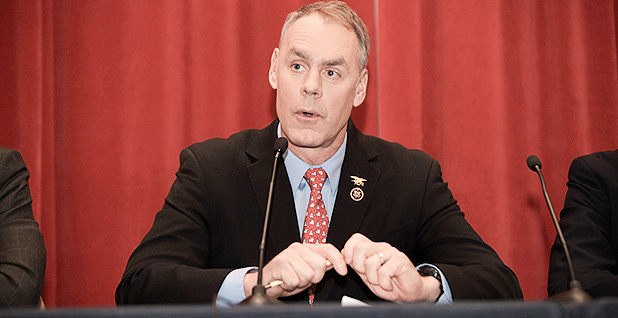 "These nominees have been forced to wait significantly longer than either the Obama or Bush administration’s first-term nominees," Zinke noted.

Brenda Burman, for instance, has been waiting 132 days and counting since President Trump announced her nomination to be the first-ever female commissioner of the Bureau of Reclamation, Zinke observed in his letter sent yesterday. President Obama’s first commissioner waited 31 days from nomination to confirmation.

Susan Combs has been waiting 120 days since her nomination as assistant Interior secretary for policy, management and budget. Obama’s assistant secretary waited 28 days for confirmation.

Combs and Burman were both approved by the Senate Energy and Natural Resources Committee on Aug. 3.

"Many senators continue to work behind the guise of the cloakroom, putting random and unknown holds on these nominations, leaving us with leadership gaps and no way to know which senator objected or how to rectify his/her concerns," Zinke wrote.

While holds are, in fact, a potentially potent and mysterious tool deployed by senators of both parties, they are not easily tracked, and some Democrats cast the delays as a function of McConnell’s floor-scheduling priorities.

So far, in addition to Zinke, the Senate has confirmed two other top Interior nominees (Greenwire, Nov. 7).

Beyond the Senate’s sluggish pace, the Trump administration itself has been remarkably slow in selecting nominees.

Eight high-level Interior positions have not yet received a nominee, according to the nonpartisan Partnership for Public Service. These unfilled spots include two assistant secretary positions and the directorships of the National Park Service and the Bureau of Land Management.

Correction: In addition to Zinke, the Senate has confirmed two other top Interior nominees. An earlier version of this story included an incorrect amount of nominees confirmed.