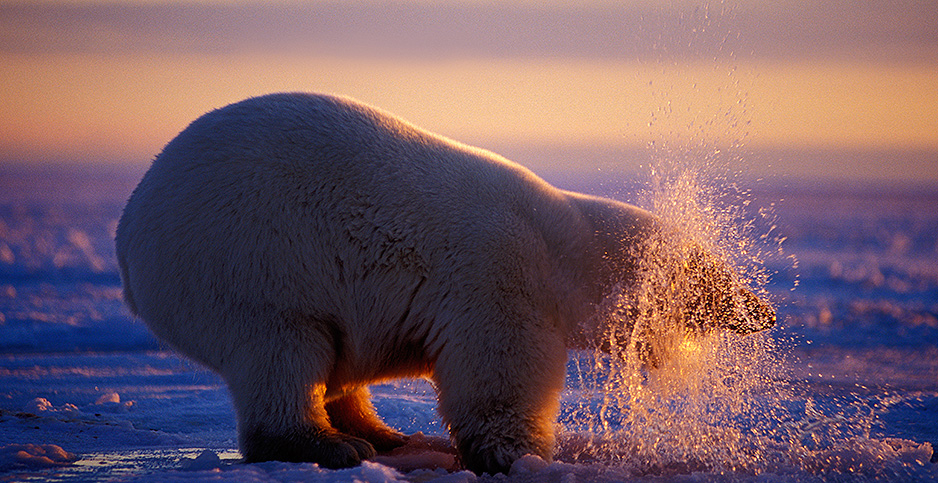 A polar bear pulls its head from an ice hole on the 1002 coastal plain of the Arctic National Wildlife Refuge, where the Interior Department intends to sell leases to drill. The Fish and Wildlife Service received a deluge of comments over seismic testing that threatens polar bears there. Steve Kazlowski / DanitaDelimont.com "Danita Delimont Photography"/Newscom

The Trump administration is getting a massive and mostly icy response to plans for an Arctic seismic testing permit that could disturb polar bears.

Capping a social media campaign, an estimated 5 million public comments denouncing the seismic testing proposal poured into the Fish and Wildlife Service yesterday. The statements were collected and submitted in advance of the Jan. 7 comment deadline through the Protect the Arctic website.

"Millions of young people are sending a loud and unmistakable message: They do not want the wildest place left in America sacrificed for a fix of oil that will make the climate crisis even worse," said Adam Kolton, executive director of the Alaska Wilderness League.

Underscoring the real target of the campaign, Kolton added, "President-elect Biden should be emboldened by this show of force for protecting the Arctic."

"We estimate that this project may result in the nonlethal incidental take of up to three polar bears," FWS stated, adding that "no take by injury or death to polar bears is likely and therefore such take is not included in this proposed authorization."

The so-called Level B harassment for which the permit is sought covers that which might "disturb a marine mammal … in the wild by causing disruption of behavioral patterns, including, but not limited to, migration, breathing, nursing, breeding, feeding, or sheltering."

The project involves a 3D seismic survey of portions of the coastal plain area of the Arctic refuge’s 1002 Area.

The surveys would help oil and gas companies understand the fossil fuel potential beneath ANWR’s coastal plain — 1.6 million acres along the Arctic Ocean where the Trump administration will hold the first-ever oil and gas lease sale tomorrow.

"I believe the FWS should actively conduct some ‘ground-truthing’ through its own surveys and monitoring activities and not rely strictly on industry surveys and self-reporting for a proposed significant activity in an area of such high national visibility and importance," former ANWR Deputy Refuge Manager Doug Frugé wrote.

Frugé added, though, that overall, the agency’s work on the incidental take permit appeared to be "well thought-out, well written and comprehensive."

The Fish and Wildlife Service’s proposal to allow Kaktovik Iñupiat Corp. (KIC) to disturb bears is one of several pro-oil actions the Trump administration is driving across the finish line in the Arctic before leaving office Jan. 20.

Yesterday, the Interior Department opened the majority of the federal mineral estate in the National Petroleum Reserve-Alaska to oil and gas leasing (E&E News PM, Jan. 4). Tomorrow, the administration plans to hold the first oil and gas lease sale in the refuge.

Attempts to gather seismic data have been stymied by polar bear impacts in the past.

A proposal from SAExploration, Arctic Slope Regional Corp. and KIC was delayed by Interior two years ago due to unresolved risks to polar bears and damage to the fragile tundra (Greenwire, Feb. 7, 2019).

FWS and the U.S. Geological Survey later published research that predicted a narrow path of limited harm to bears and their cubs (Energywire, Jan. 6, 2020).

That path included extending the survey over multiple winters and performing work later in the winter, when polar bears are nearer to emergence from their dens. The researchers acknowledged at the time that they had yet to fully eliminate the risk of polar bear harm or death.

The Bureau of Land Management advanced a draft review of KIC’s latest proposal to shoot seismic this winter that appears to carry some of those stipulations on timing (Energywire, Oct. 26, 2020).

BLM found no significant environmental impacts from the program. The final analysis is expected as soon as next week.