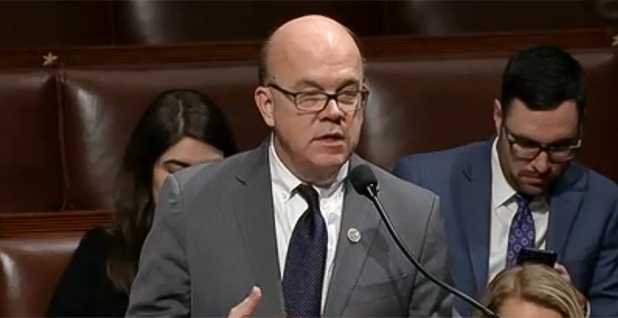 House Democrats are hammering out a final proposal for a select committee on climate change, but it’s one that likely won’t please progressive activists pushing the "Green New Deal."

Incoming Rules Chairman Jim McGovern (D-Mass.) said yesterday he’s working with leadership on a formal proposal for the committee, which will be included in the rules package, one of the first items the House will vote on in the new Congress. He added that he expects to have something together "in the next couple of days."

McGovern suggested the language won’t be nearly as prescriptive as the draft resolution floated by Rep.-elect Alexandria Ocasio-Cortez (D-N.Y.) and the Sunrise Movement. It will have no legislative or subpoena power, nor will it be specifically tasked with crafting a "Green New Deal" bill. What, exactly, the committee works on will be up to its members, McGovern said.

"I support the Green New Deal, and I certainly want to do everything I can to advance it," McGovern told reporters. "But I’m not going to pre-judge what the select committee is going to do."

But in a continuation of a feud that’s been brewing for weeks, the Sunrise Movement last night issued a rebuke of that vision of the select committee.

"Without a mandate to create a plan and a requirement that its members don’t take fossil fuel money, we are deeply concerned that this committee will be just another of the many committees we’ve seen failing our generation our entire lives," Varshini Prakash, co-founder of the Sunrise Movement, said in a statement.

The Democratic establishment has been in conflict for weeks with the progressive Sunrise Movement and Ocasio-Cortez over the structure of the select committee in the next Congress.

Committee chairmen, especially incoming Energy and Commerce Chairman Frank Pallone (D-N.J.), generally want the select panel not to be formed or to have little real power, while Ocasio-Cortez has been pushing for the select panel to be an exclusive forum to write a sweeping "Green New Deal" bill.

What the select committee actually looks like in the next Congress is being dictated largely by incoming Speaker Nancy Pelosi (D-Calif.), who was talking about bringing back the Select Committee for Energy Independence and Global Warming weeks before Ocasio-Cortez took up the idea.

Then-Rep. Ed Markey (D-Mass.) chaired that panel the last time Democrats controlled the House, and Rep. Kathy Castor (D-Fla.) is poised to lead it this time around (Greenwire, Dec. 20).

John Bowman, senior director of federal affairs for the Natural Resources Defense Council, cheered the news. "As a longtime environmental champion, few are better suited to help shine a bright light on the threats Americans face from the climate crisis and advance the solutions we urgently need," he said.

Sunrise, too, was hopeful Castor and Pelosi would be able to deliver on their vision for the committee.

"As Pelosi and Castor share more about the committee’s mandate and goals, we hope that they will use this opportunity to make a real plan to transform our economy in line with what the science and justice demand, and create millions of good jobs in the process," Prakash said.

But progressives were especially miffed by news this week that the panel would likely not have subpoena power (Climatewire, Dec. 20).

"Our ultimate end goal isn’t a Select Committee. Our goal is to treat Climate Change like the serious, existential threat it is by drafting an ambitious solution on the scale necessary — a Green New Deal — to get it done. A weak committee misses the point and endangers people," Ocasio-Cortez tweeted Wednesday.

At the same time, even some members who have backed Ocasio-Cortez’s proposal don’t see that distinction as a big deal. McGovern, for instance, voiced his support last week.

The important thing will be to get a select committee up and running within "existing structures" to help spotlight the issue, McGovern said. If the select panel is willing to work with committees of jurisdiction, its lack of subpoena power likely won’t be an issue.

"The bottom line is that there are ways to deal with that," McGovern said. "They can work with committees of jurisdiction if they want to have somebody subpoenaed and join them in joint hearings."

But not all current lawmakers have resigned themselves to leadership’s vision for the select committee.

Rep. Ro Khanna (D-Calif.), one of the early backers of Ocasio-Cortez’s proposal, said it would be "in the political self-interest" of Pallone and the committee chairs to support a strong select committee with subpoena and legislative powers.

Khanna noted that Pallone’s committee has a massive chunk of jurisdiction over other big-ticket issues, such as health care, and suggested a select panel could only help Democrats address climate change.

"Where we really need to move forward is on the turf warfare," Khanna told reporters yesterday. "I think we’ve got to get the committees to realize they are winners by empowering a new committee, not losers, and stop the Washington mindset of hanging on to turf."

Pallone initially voiced his opposition to the select committee but has repeatedly refused questions about it over the last week.

"I’m not talking about the select committee," Pallone said yesterday. "I don’t want to."