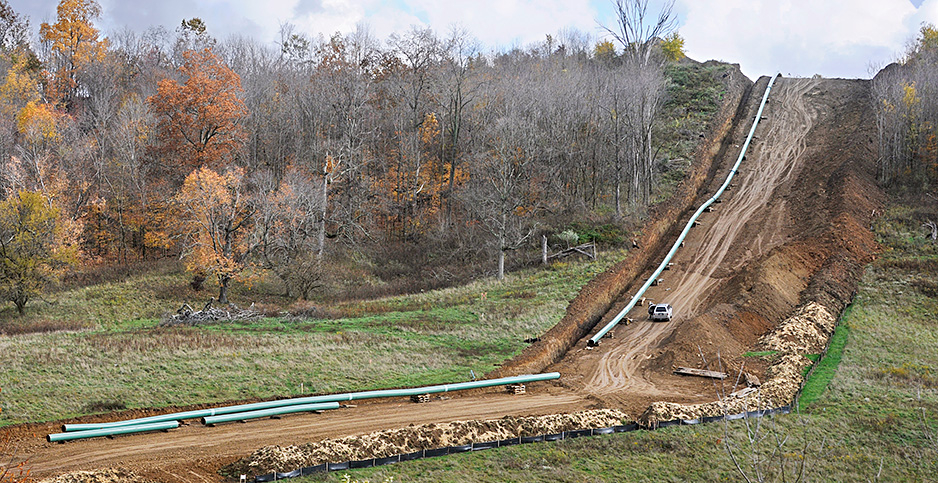 A worker steps out of a car to inspect a natural gas pipeline under construction near Cadiz, Ohio, in this 2012 file photo. Chris Fitzgerald / Candidate Photos/Newscom

As the Federal Energy Regulatory Commission weighs changes to its natural gas pipeline reviews, it’s grappling with a key question: How should it determine whether a project is needed?

For years, the agency has signed off on proposals if developers could prove they had customers ready to reserve capacity on their pipeline. But critics say these so-called precedent agreements have a glaring loophole: Different units of the same company can act as both seller and buyer — winning a green light from FERC in the process.

The commission’s reliance on precedent agreements is one of many topics included in FERC’s ongoing review of how it considers and approves new natural gas pipelines.

The outcome could shape the future direction of the independent agency, which regulates power markets and large-scale energy projects. Analysts say FERC’s approach to large-scale natural gas projects could make or break many of the Biden administration’s clean energy goals.

"For as much attention as the commission’s climate reviews have gotten, FERC’s dependence on precedent agreements is the single most problematic part of its reviews today," said Gillian Giannetti, an attorney with the Natural Resources Defense Council’s Sustainable FERC Project.

The agency has also sought comments about landowner interests, environmental impacts, effects on environmental justice communities and the transparency of its pipeline approval process. Comments for the proceeding closed this week.

"This decision is probably not going to happen overnight," said Suzanne Mattei, an energy policy analyst at the Institute for Energy Economics and Financial Analysis, which advocates for sustainable energy. "It’s a lot to grapple with, but it’s all very, very important for the energy future of the country."

When a developer applies with FERC to build a new natural gas pipeline, it typically includes one or more precedent agreements with prospective companies seeking to reserve capacity on the pipeline. While FERC’s current policy is to consider "all relevant factors" to determine the need for a given project, it has in practice relied on the existence of these agreements as proof of necessity, even when the parties that signed a contract are affiliates of the same parent company, according to longtime agency observers.

Between October 2008 and February 2020, FERC issued 480 certificates — allowing pipeline companies to begin construction for a project — and denied three, according to commission records. All recent projects that have been approved included precedent agreements in their applications, while the handful of projects that have been denied certificates lacked them, said Maya van Rossum, leader of the Delaware Riverkeeper, who has followed FERC pipeline issues for more than 15 years.

"In almost every instance, this is the kind of need demonstration we see in one form or another," said van Rossum.

Natural gas companies and trade groups say the agreements are a good proxy for determining whether a project is in the public interest, since they help ensure that projects are financially viable and are supported by market demand. Precedent agreements among affiliates are just as valuable indicators and are often already subject to additional scrutiny by state regulators, the Interstate Natural Gas Association of America wrote in comments to FERC.

"There is no basis for the Commission to depart from this precedent," INGAA wrote.

Yet Democratic Chairman Richard Glick has said FERC should review its reliance on the agreements as proof of need, especially in cases where the contracts are between units of the same company. FERC’s Certificate Policy Statement — the guiding document for how the commission should consider project need — was issued in 1999 and hasn’t been amended since.

Deals ‘not entered into lightly’

Advocates for changing FERC’s handling of pipeline reviews say the agency should account for shifting climate and energy trends. The Biden administration has proposed cutting greenhouse gas emissions in half by 2030 relative to 2005 levels, and dozens of states have set their own clean energy or emissions reduction goals.

When FERC approves a project, it issues a certificate of public convenience and necessity. That generally allows the pipeline developer to begin construction, including the possibility of forcibly taking people’s property through eminent domain.

Because pipeline construction can result in irreparable damage to property and the environment, FERC must be thorough in its assessment of whether a project is truly in the public interest, a coalition of environmental and community groups wrote in comments to FERC this week. In addition, given the threat of climate change and long-term outlooks for natural gas use, relying exclusively on precedent agreements doesn’t cut it anymore, said the groups, including the Sierra Club and NRDC.

"[The] gas industry itself is recognizing the long-term instability of its projects, as shippers are demanding shorter and more flexible terms in precedent agreements," the groups wrote. "This makes precedent agreements an even less reliable indicator of future demand than before."

But Casey Hollers, director of regulatory affairs at the Natural Gas Supply Association, argued in comments to FERC that the agreements are "not entered into lightly," given that they establish a binding commitment for a shipper to use gas from a project. Other supporters of the current practice wrote that the commission lacks the authority or the expertise to make its own determination of project need and should not attempt to second-guess developers on the issue.

"[The current] approach provides the most objective and straight-forward evidence for determining whether a project is in the public interest," Hollers wrote.

Others have called for FERC to change its practices only in cases where the precedent agreements are among affiliate companies. In those situations, the commission should "employ a rebuttable presumption" that the contracts do not demonstrate need while requiring independent evidence to overcome that presumption, the Democratic attorneys general of Massachusetts, Connecticut, Maryland, Minnesota, New Jersey, New York, Rhode Island and the District of Columbia wrote in joint comments to the commission.

EPA made a similar recommendation.

"To prevent self-dealing and ensure accurate needs assessment, it is important for the Commission to thoroughly examine the relationship between the parties entering into a precedent agreement and carefully scrutinize purposed need where the pipeline developer is affiliated with a local distribution company or other entity reserving capacity on the line," EPA wrote in its comments.

Some commenters cited projects that were approved on the basis of precedent agreements between affiliates that are now canceled or facing setbacks. For example, the commission in 2020 approved the Pacific Connector pipeline, which had a precedent agreement with the Jordan Cove liquefied natural gas project. Both projects were developed by the same corporate parent, Pembina, and are now at risk of cancellation (Greenwire, April 23).

FERC initially rejected the Jordan Cove and Pacific Connector projects in 2016 because "Pacific Connector, by failing to provide precedent agreements or sufficient other evidence of need, failed to demonstrate market support for its proposal," the agency recounted in a filing approving the project last year. But the second time around, Pacific Connector provided the commission with a precedent agreement with Jordan Cove, covering 96% of the project’s capacity, which FERC viewed as "sufficient evidence of market demand for the project," according to the 2020 order.

The existence of that agreement with an affiliate company was the "sole reason" the commission approved what was essentially the same project, then-Commissioner Glick wrote in his dissent of the approval. Pembina could not immediately be reached for comment.

Despite Glick’s skepticism of precedent agreements between affiliates, FERC’s other four commissioners — three Republicans and one other Democrat — declined to comment on the issue. While Glick as chairman has broad discretion over the commission’s agenda, he would need a majority to issue a new Certificate Policy Statement or modify FERC’s existing one.

Some commissioners have spoken about the issue before. Precedent agreements are a reliable indicator of the need for a project, then-Chairman Neil Chatterjee said in 2017.

"The commission has historically prioritized precedent agreements in its analysis because those are clear, unequivocal statements of economic need by the market itself," Chatterjee, a Republican, said at a 2017 forum hosted by the Energy Bar Association. "The companies who are willing to enter into contracts to pay for transportation on the service on a pipeline have a much clearer understanding of the market need for the gas than we could develop through studies here in D.C."

The commission has previously declined to change its stance on the topic. After receiving thousands of comments in 2018 as part of a similar review of its Certificate Policy Statement, FERC made no changes to its reliance on precedent agreements or other aspects of its pipeline review process.

Christi Tezak, managing director of research at energy research firm ClearView Energy Partners LLC, said the firm expects FERC "to expand its ‘determination of need’" to consider criteria other than just precedent agreements as part of its latest review.

"[We] have not attempted to discern individual commissioner views on the 12 individual questions related to determination of need," Tezak said in an email. "But more than just precedent agreements (with affiliates or otherwise) looks likely to us."

Given that it is "incredibly common" for pipeline proposals to include precedent agreements between affiliated companies, it would be a significant change if the commission were to rely on other factors to determine project need, said Megan Gibson, a senior staff attorney at the libertarian-leaning Niskanen Center.