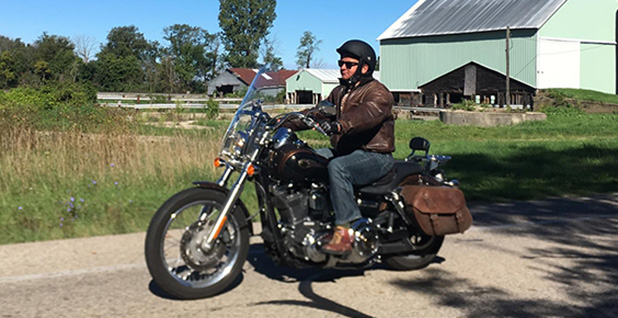 "I’ve been riding since I was probably 12 years old," the Democrat from Michigan said in a recent interview. "Last summer, during the August congressional break, I rode 1,800 miles all across Michigan, from the Lower Peninsula to the Upper Peninsula."

If you’re a reporter and the interview stretches longer than half an hour, Peters may even invite you on a ride.

"In between stops, various people would ride with me, from veterans groups to motorcycle safety advocates to local business owners," he said. "You have to join us next summer."

Peters’ passion for motorcycles belies a more serious side. When it comes to energy and environmental issues, he turns somber and reflective, soliloquizing on the need to treat climate change as the most pressing issue facing humans in the 21st century.

"There’s no question climate change is a substantial threat to our planet," he said. "Even the military understands that climate change could lead to national security threats and foreign conflicts" (Greenwire, Nov. 16, 2017).

Coming from Michigan — home of the Big Three automobile manufacturers — Peters said he felt some pressure not to discuss climate change when running for a Senate seat. But he persisted in making the issue a central tenet of his campaign.

"I think it was rare to have a candidate running for the U.S. Senate to actually campaign on climate change," he said. "A lot of people would say that in Michigan, that may not be the great message because it’s an industrial state."

"Dealing with climate change would actually be good for our economy," he said. "If we’re creating jobs to install solar or to build wind farms, those are local jobs that can’t be outsourced. You gotta have people local."

Like many Democrats in Congress, Peters boasts a 100 percent score from the League of Conservation Voters. But Tiernan Sittenfeld, senior vice president of government affairs for LCV, said Peters demonstrates a true dedication to environmental issues.

Peters "clearly, both as an elected official and when he was on the campaign trail, knew that being good on climate change is both good policy and good politics," Sittenfeld said.

"I think his leadership on the Great Lakes and pipeline safety and climate change and his really high LCV score demonstrate how much of a priority protecting the environment is for him."

Peters took a while to enter politics.

After graduating from college and earning a Master of Business Administration in finance, he served as a commander in the Navy Reserve and then spent more than 20 years as a financial adviser at Merrill Lynch and other firms.

A desire to "be part of the debate on how [my home]town would grow" led him to run for city council, he said. This whetted his appetite for politics.

He ran for the state Legislature, and won handily. He went on to serve as the Griffin endowed chair in American government at Central Michigan University. Then came three terms in the U.S. House, and now, the U.S. Senate.

While Peters’ career path has been anything but linear, one common element has run through it all: a dedication to environmental issues.

James Clift served as the environmental policy analyst for the Michigan Senate Democrats while Peters was in the state Senate. He said Peters has "always been committed to environmental protection, ever since he was first elected. He came in with a lot of energy and passion when it came to these topics."

At CMU, Peters taught a seminar titled "Can Climate Change Heat Up Michigan’s Economy?" With its admittedly "clever" title, he said, the course focused on "the necessity of dealing with climate change as an economic opportunity for Michigan."

And while running for the Senate, Peters attacked his opponent’s record on climate change. Terri Lynn Land, the then-secretary of state for Michigan, "was a top go-getter in the state, so she was a pretty well-known person," he said. "But one of my main issues was climate change, and how we have to deal with it." He went on to defeat her with 55 percent of the vote.

As a member of the Senate Committee on Commerce, Science and Transportation, Peters has championed pipeline safety in the Great Lakes.

Enbridge Inc.’s Line 5 has run under the Straits of Mackinac for more than half a century. Peters worries that the aging pipeline will someday leak, contaminating the drinking water supply for roughly 40 million people.

"The pipeline is 60 years old. It was built prior to any kind of environmental regulations," he said. "If you have a break in that pipeline, it would be absolutely catastrophic. It would be simply unacceptable."

Peters has shepherded through Congress a raft of bills aimed at mitigating the risks of an oil spill in the Great Lakes.

One measure requires NOAA’s undersecretary for oceans and atmosphere to update Environmental Sensitivity Index maps for each coastal area of the lakes.

Another measure designates the Great Lakes as a high consequence area for pipeline safety and forces oil companies to factor ice cover into their oil spill contingency plans.

Clift, who now serves as the policy director for the Michigan Environmental Council, said he appreciates Peters’ attention to the issue.

"I think Peters has been a great champion for the Great Lakes over the years. I see his work on pipeline safety as really important these days, given the oil spill that occurred in Kalamazoo on Enbridge’s Line 60," Clift said, referring to the 2010 incident that remains the largest inland oil spill in U.S. history.

The Great Lakes are under attack on another front.

Several invasive species have entered the watershed through the ballast water of oceangoing ships. Peters is particularly concerned about one wriggling invader: Asian carp.

Along with other senators on the Great Lakes Task Force, Peters has pushed the Army Corps of Engineers to finish an $8.2 million study on controlling the movement of Asian carp upstream into the Great Lakes Basin (Greenwire, April 11, 2017).

"Asian carp is an issue that terrorizes everybody," said Rep. Debbie Dingell (D-Mich.). She said Peters works hard in the Senate to make sure this issue, as well as other environmental concerns, is addressed and understood by both Democrats and Republicans.

"We can’t allow any margin for error. We need a permanent solution, and time is of the essence. The possibility of a fish getting into the Great Lakes, it would be absolutely devastating to both commercial and recreational fishing in Michigan, which accounts for billions of dollars of activity," Peters said, noting that he met with the Army Corps of Engineers earlier this month about the issue.

Peters has also sparred with Republicans on the Commerce Committee over the Commercial Vessel Incidental Discharge Act, which would transfer responsibility for regulating contaminated ballast water from U.S. EPA to the Coast Guard. He opposes the bill because he thinks "the role of EPA needs to be stronger."

Motorcycles aren’t the only way Peters gets around.

The Democrat recently hopped into a self-driving car before a Commerce Committee hearing and breezed down Constitution Avenue.

Back in the committee, Peters has partnered with Commerce Chairman John Thune (R-S.D.) on legislation that would exempt thousands of self-driving vehicles from safety regulations and expedite testing on public roads.

"Sen. Peters is my partner on legislation and a passionate advocate for the safety benefits of self-driving-vehicle technology. In working to advance needed reforms, he’s been both a tough negotiator for his caucus and also something of an auto technology evangelist to colleagues who want more restrictions," Thune told E&E News.

Manufacturers wanted lawmakers to include commercial trucks in the measure. But teamsters unions successfully lobbied lawmakers to leave them out due to concerns that self-driving trucks would eliminate jobs for drivers.

Bill Black, political and legislative council with Teamsters Joint Council 43 in Michigan, said Peters and his office were very receptive to this concern.

"Sen. Peters was supportive of our position and took trucks out of the legislation," Black said. "We enjoyed working with him. We wish there were more people like Sen. Peters wanting to know our concerns on important legislation like that."

The House passed its own version of the bill in September. But it has been held up in the Senate over safety concerns (E&E Daily, Jan. 25).

In light of the accident involving an autonomous car that killed a pedestrian in Tempe, Ariz., earlier this week, Peters said the bill could help the National Highway Traffic Safety Administration regulate the industry.

"I am saddened and concerned by this tragedy, and I will be closely following the investigation into the causes of this accident," Peters said in a statement (E&E Daily, March 20).

Peters said he will continue to push for the legislation’s passage, adding that he believes autonomous vehicles will actually boost the safety of America’s roads.

"I think the No. 1 issue that brings me to the technology is safety," he said. "We lose close to 40,000 people to deaths on our highways every year. … This is technology that literally will save tens of thousands of lives on our highways."

With a nod to Michigan, Peters then steered the conversation back to jobs in the auto industry. "We’re in a pretty significant race globally to develop self-driving automobiles," he said.

"Asian companies and European companies are moving very aggressively in this area. I want to make sure that our domestic automakers get there first or nearly first and are competitive."

As for that motorcycle trip over the August congressional break? It’s never far from the senator’s mind.

Off of Capitol Hill, "my priority is always spending time with my family, No. 1," Peters said. "No. 2 is motorcycling."