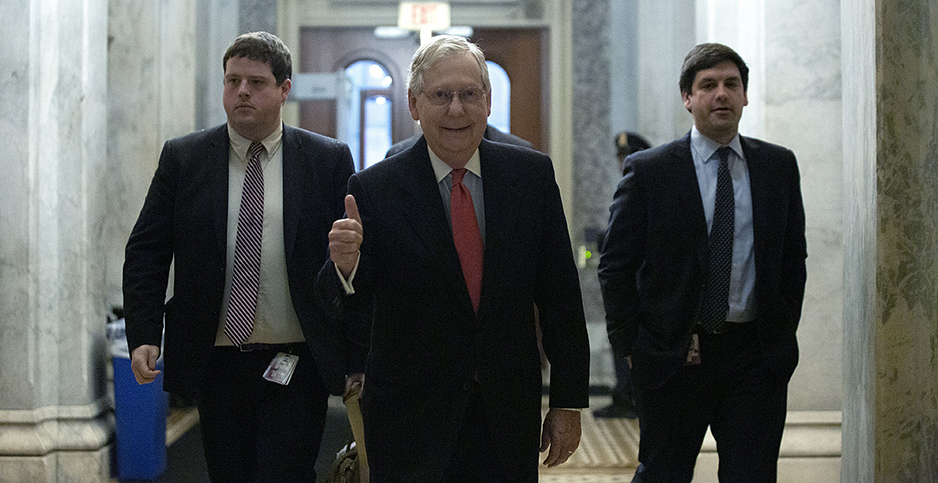 The Senate last night broke through days of gridlock and passed the largest economic stimulus package in U.S. history, with the House expected to try to follow suit tomorrow.

House lawmakers are hoping to pass the measure by voice vote after some debate starting tomorrow morning.

The late Senate vote capped two days of suspense over the deal. First, Republicans accused Democrats of holding out for partisan demands. Then, yesterday, a group of GOP members balked.

A group of senators raised new objections over what they said were overly generous unemployment benefits that would allow some individuals to temporarily earn more than their normal salary (E&E News PM, March 25).

But Treasury Secretary Steven Mnuchin rejected allegations that the disputed provision was an error.

"We wanted to have enhanced unemployment insurance," he said yesterday during a White House briefing. "This was the only way we could ensure states could get money out quickly."

Sen. Ben Sasse (R-Neb.) and other critics had signaled that they would hold up a vote unless the provision was changed, but relented and settled for a vote on an amendment that would have capped the unemployment assistance at 100% of an individual’s salary. That amendment failed 48-48.

As anticipated, a provision that would have appropriated $3 billion toward President Trump’s pledge to fill the Strategic Petroleum Reserve was absent from the final bill.

Also missing were clean energy tax measures sought by some Democrats and environmentalists, as well as carbon emissions limits for airlines that were part of House Democrats’ stimulus proposal unveiled earlier this week (E&E Daily, March 24).

Majority Leader Mitch McConnell announced that the chamber won’t vote again until April 20. However, the Kentucky Republican left the door open to votes before that date if needed.

The extended recess comes amid growing concerns over the spread of COVID-19 throughout the Capitol.

Moulton said he started feeling unwell March 19, complaining of a low-grade fever, fatigue and tightness in the chest.

He and his wife, Liz, who also has symptoms, have been self-isolating but have been unable to receive tests, he said. Moulton said he will likely miss the House vote on the coronavirus package.

"People with symptoms should be tested, and the face that tests are not available for Liz and me and far too many other Americans, a month after I wrote to the Vice President demanding more widespread testing, is a major failure of the Administration that I will continue fighting to fix," he tweeted.