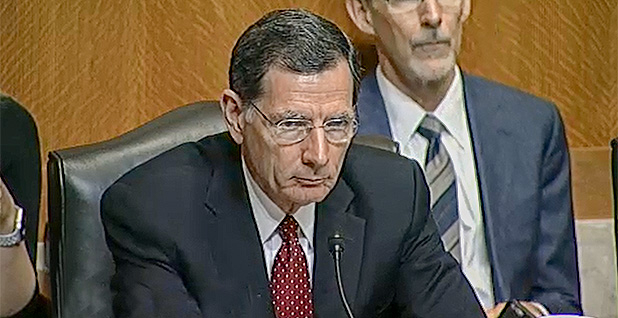 The 116th Congress doesn’t start for another month, but senators from both parties are already calculating the legislative impact from a renewed focus on climate change that will accompany the incoming House Democratic majority.

Sen. Jim Inhofe (R-Okla.), the Senate’s self-proclaimed leading climate skeptic, said he will be vigilant in his role as Armed Services Committee chairman to prevent costly environmental policies from creeping into the Pentagon’s mission.

"I would say we’ve never said anything but the climate changes — it’s always changing, it always will change," he told E&E News this week. "We’re not going to alter the things that we’re doing that are necessary to defend America and America’s interests as a result of individuals who are trying to turn this into a policy change for America."

"We ended up using the military to carry out an environmental agenda, which they did, they did successfully, in terms of distractions," he said. "And so we ended up with billions of dollars in things like the green military and all these things, and we can’t allow that to take place because we have enough problems right now. Right now we’re in the budget fight for the military."

But Wicker, whose role on Commerce will give him some jurisdiction over federal fuel economy standards, cast doubt yesterday on established climate science, adding that French protests over the country’s new motor fuel taxes should be "instructive" to anyone pushing for comprehensive legislation to address climate change.

"I’m just saying I think a lot of Americans may give lip service to doing something because it’s been hammered into their heads that there is, in fact, something that can be done to reverse temperature rises," Wicker said. "But when it’s translated into reality and you can’t drive your car because gas is $7 a gallon, I think the general public in most of the western democracies is going to rise up and revolt."

"This is going down —- that story needs to be told," he said pointing to the papers. "So absolutely we’re going to be looking for that opportunity because really the other side’s policies kill jobs. They kill jobs and they drive up energy costs for the average American, directly and indirectly. And we’re about preserving those jobs, protecting that family’s pocketbooks and continuing policies that have given you this sort of 29 percent decrease in CO2 per GDP since 2005."

"Let’s just stick it to the American family — drive up costs, drive jobs overseas, hit ’em this way and that way and, by the way, be counterproductive for global greenhouse gas emissions," he said of Democrats’ carbon pricing plans. "That’s craziness. We’re absolutely going to push back on that."

"It’s something that I expect to deal with — in fairness, I actually want to," Murkowski told E&E News. "I think that we can be a committee that hopefully can lead a rational conversation on it rather than seeing the extremes on both sides or just kind of the rhetoric."

Murkowski, who once backed a bipartisan cap-and-trade bill floated by Senate moderates attempting to steer the climate debate toward middle ground, said she hasn’t fleshed out a committee agenda for next year yet. She now opposes regulations for limiting carbon emissions, favoring instead innovation and technology as a solution.

"I’d like to try and lead on some of those issues as a committee, but right now we haven’t filled out that policy goals list yet," she said.

Inhofe also indicated that he would not dismiss climate-friendly policies for the military out of hand, saying he’s receptive to measures that boost military readiness even if he disagrees with the underlying science on man-made contribution to climate change.

"We say the climate is always changing, and if we have something that’s going to happen within that change that is going to be damaging and cause us to try to use that to try to defend America, we would be doing it," he said.

Although he supported McNamee’s nomination in committee, Manchin said in a statement last night that he changed his mind after viewing a video of controversial comments the former Energy Department official made questioning climate change.

Manchin’s about-face marked the clearest sign yet that he may end up as the ranking member on Energy and Natural Resources, a position expected to be open in the next Congress.

The three next most senior members of the minority on the panel — Oregon’s Ron Wyden, Vermont independent Bernie Sanders and Michigan’s Debbie Stabenow — have all indicated they plan to remain as ranking members on other committees. If they stay put, Manchin would be eligible to claim the ranking member slot on Energy.

Environmentalists have pressed Sanders and Stabenow to deny Manchin the committee position by claiming it for themselves. Both senators have indicated they won’t do so, but they also signaled they plan to press for more climate action in the next Congress.

"There’s a lot more to do, including climate change," she said, citing additional work on forestry and conservation she plans to push. "It’s about holding carbon in the ground, holding in the trees."

Although major climate legislation won’t pass the Republican Senate, a Democratic House could mean more work gets done on climate through appropriations carve-outs and a handful of bipartisan programs, such as carbon capture research at the Department of Energy.

His priority right now, for instance, is working out a compromise on the Trump administration’s proposed freeze of fuel economy standards (see related story).

"The one that’s staring us right in the face is mobile sources. It’s the biggest source of emissions," said Carper, who serves alongside EPW Chairman John Barrasso (R-Wyo.).