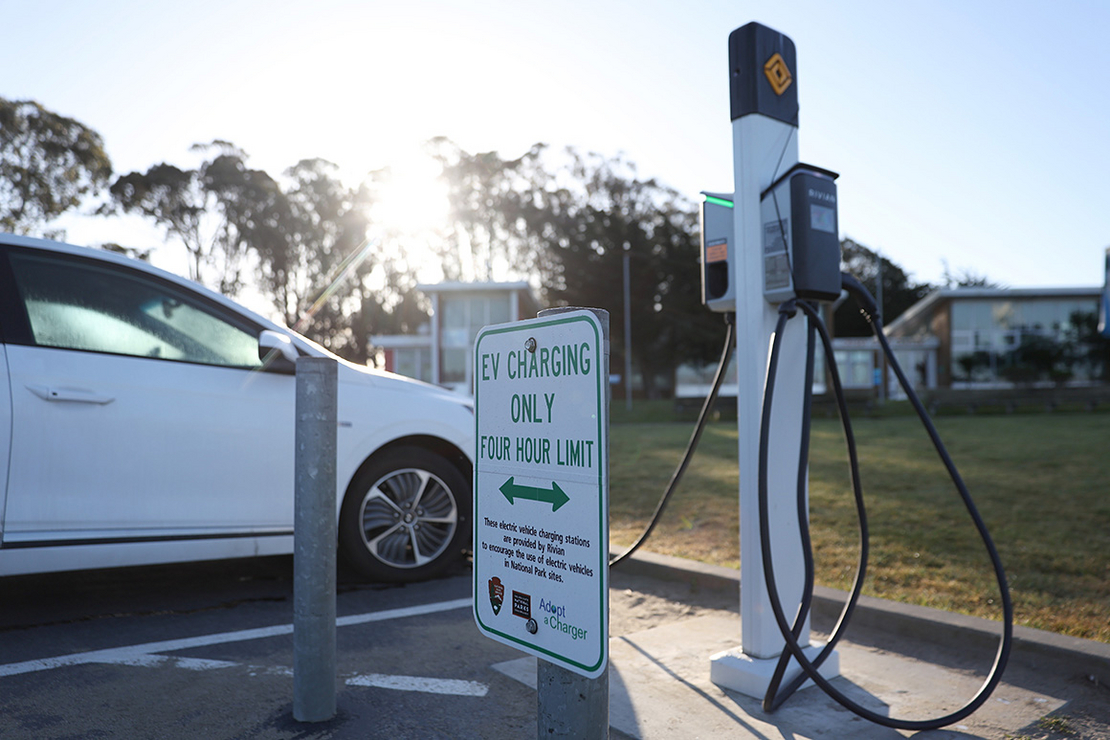 The Senate’s sweeping climate and energy bill would do nothing less than reshape how cars are made in the electric age, offering automakers nearly irresistible inducements to build the supply chains in America — or more to the point, not in China.

In reaching for this goal and a laundry list of others related to electric vehicles, the bill — which resulted from a deal between Senate Majority Leader Chuck Schumer (D-N.Y.) and Energy and Natural Resources Chair Joe Manchin (D-W.Va.) — invents new rules that the government has never applied to vehicles, leaving some experts scratching their heads over how it is supposed to work in practice.

“This bill is about trying to build domestic manufacturing capacity for EVs,” said Nick Nigro, the founder of Atlas Public Policy, an electric-vehicle consultancy.

He and other EV advocates applauded the ambition and scope of the bill.

“It accelerates the market and creates more market certainty,” said Ben Prochazka, the executive director of the Electrification Coalition, a nonprofit that advocates for EV adoption.

However, some congressional watchers wondered if the proposal, called the “Inflation Reduction Act of 2022,” might have created unrealistic goals that could end up slowing the uptake of EVs.

The bill’s introduction came during a head-turning week when Congress has, after decades of inaction, embraced industrial policy to counter China.

On Wednesday, the Senate passed a vast $280 billion bill to stimulate domestic manufacturing of computer chips, and yesterday that bill passed the House of Representatives and is on its way to President Biden for signature (E&E News PM, July 28).

The Manchin-Schumer deal is also about a lot more than just manufacturing. It dedicates billions of dollars of tax credits and spending programs that would create a market for used EVs, build charging stations in disadvantaged neighborhoods and more.

The centerpiece of the bill is a monumental change to the electric-vehicle tax credit, which is the U.S. government’s primary lever to encourage Americans to buy EVs.

In essence, the changes make the tax credit an extension of American industrial policy by requiring much of the battery to be sourced all the way back to the mine either in America or an allied country.

The rules align with a widely shared policy objective in Washington that the U.S. needs to develop its own supply chain for EV batteries that doesn’t rely on China. But some experts called the aggressive timeline of the tax credit nearly impossible.

“There isn’t a single car in the world that qualifies for it right now,” said Sam Jaffe, a vice president of battery solutions at E Source, an energy consulting firm.

Since Congress established the credit in 2007, it has been pretty straightforward: buy a new EV, and get a $7,500 credit applied to that year’s taxes.

That incentive has been reaching its limits because each automaker’s vehicles are only eligible only up to 200,000 unit sales. Tesla Inc. and General Motors Co. have reached that limit, and Toyota Motor Corp. and Ford Motor Co. will soon reach theirs.

Under the new regime, the $7,500 incentive would remain but be undergirded with a different set of priorities that profoundly impact automakers.

Instead of being limited in how many vehicles they could sell, automakers would have to meet stringent manufacturing and content requirements for their batteries.

Half of the incentive — $3,750 — would be available only to automakers whose batteries rely on critical minerals made either in the U.S. or countries with which the U.S. has free-trade agreements. The other $3,750 requires the battery’s components to be manufactured and assembled in North America.

Each starts next year and escalates in percentage each year.

In both measures, by 2024, the car is excluded from the credit if it contains critical minerals from a “foreign entity of concern.”

While several countries could fit that definition, experts said that is an unmistakable signal to automakers that they will need to avoid supplying from China if they want their customers to get the tax write-off.

Congress watchers say the impetus to create the new system came from Manchin, and reflect his desire to wean American automakers off their overwhelming reliance on China for the expensive, high-tech endeavor of processing the key minerals that go into lithium-ion batteries.

Earlier versions of a reconciliation package focused not on global competition but on labor unions, offering big subsidies to cars made with union labor. Manchin made clear his displeasure with that idea.

Jaffe of E Source said the U.S. government has no system in place for automakers to report the content of their batteries and that doing so will be a complicated task.

“It sounds like a morass to try to figure out: Where does this stuff come from? How much is in there? And does it count?” he said.

The likelihood that automakers will be unable to meet the requirements, at least at first, would in turn mean that the credit wouldn’t be available to consumers, which could put the chill on EV sales, according to some analysts.

“It would be hard for any existing manufacturer to say they are compliant with this fully,” Nigro said.

Another change to the tax credit is that for the first time it will be targeted to lower-income buyers. The goal is to encourage the spread of EVs beyond the wealthy early adopters, but some experts wonder if it will work as intended.

Prochazka of the Electrification Coalition said one unintended consequence of the limits could end up discouraging sales to wealthier people who are on the fence about EVs.

“It would be great if [the limits] were a little higher,” he said.

The same dampening effect could occur for lower-income buyers, he said. “If a consumer walks into a dealership and the first question the dealer has to ask is, ‘What is your household income?’ — that immediately establishes a potential downcycle,” he said.

Until now, there has been no special incentive for Americans to buy used electric vehicles. But that will change drastically if the bill becomes law.

A buyer of a used Nissan Leaf or Tesla, for example, will get a $4,000 tax credit from the purchase. The vehicle must be at least two years old. As with the new-vehicle incentive, there are income requirements, but lower: single people up to $75,000 and married couples up to $150,000.

“This is absolutely huge,” said Hoyos of ZETA, calling it a “sleeper issue” that could get many more people into EVs.

“The more right now that we get out there that are new, the more that are going to be flowing to the used market,” he added.

The bill also is packed with provisions that grease the skids as automakers move down the path toward electrification.

They include $2 billion in grants to retool existing factories for electric vehicle production and $20 billion in loans to build new EV factories. A production tax credit would create generous per-kilowatt incentives for factories to produce battery cells and modules.

Other provisions aren’t specific to EVs but could be targeted there, such as a $10 billion investment tax credit to create factories for clean-energy manufacturing and $500 million in the Defense Production Act in part meant for critical-mineral processing.

While automakers and battery-makers have unveiled plans for big factories, especially where they have been wooed by local officials in the U.S. Southeast, the new policies could “ensure that some of those benefits are spread out more evenly,” Nigro said.

Additionally, the Senate proposal takes existing tax credits for building EV charging stations and makes them way more generous. But there’s an intriguing wrinkle: They can be built only in poorer communities.

The charging-station incentive leaps from $30,000 to $100,000. It also multiplies by being applied — not just to one property, but to unspecified “items” on that property.

What that means is unclear, but “items” could mean individual charging pedestals meant to fuel two cars at a time. Given that charging plazas usually have more than one such pedestal, the incentive could be appetizing to developers.

The tax write-off is only available in urban census tracts where the poverty rate is at least 20 percent and in more rural areas where the tract makes 80 percent or less of statewide income.