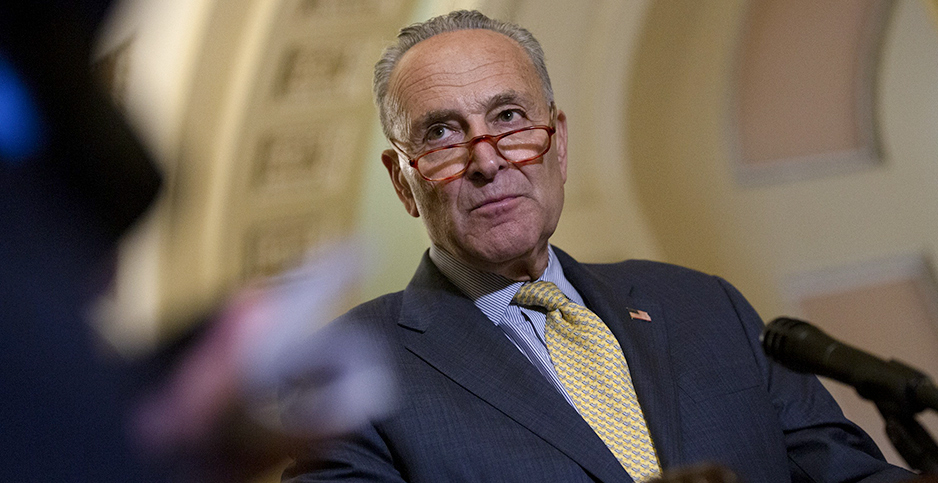 Climate change activists and their opponents are treating this week’s Senate vote on the Trump administration’s Clean Power Plan rollback as a sign of how Senate Democrats plan to fight on climate.

The Congressional Review Act vote this week to repeal the Affordable Clean Energy (ACE) rule is almost entirely symbolic, since Democrats only hold 45 of the 100 seats in the upper chamber — plus two independent senators who caucus with them — and the House hasn’t proposed companion legislation.

But the CRA, which allows Congress 60 legislative days to review executive branch actions, is one of the few ways Democrats can push liberal climate policies without the approval of Majority Leader Mitch McConnell (R-Ky.). The law allows a resolution of disapproval to come to the floor with the support of just 30 senators.

Democrats and environmentalists are making the case that it’s allowing them to call attention to climate change amid years of GOP reluctance.

"I think anything that raises this as an issue at this point is very helpful," Sen. Sheldon Whitehouse (D-R.I.) said yesterday.

The vote also comes as Senate Minority Leader Chuck Schumer (D-N.Y.) is attempting to make the case to Senate Democrats that he should be majority leader in the next Congress.

Schumer last month announced that he would put a major climate bill on the floor first thing if he is in charge in 2021, and Democrats are planning a series of CRA votes on other policy priorities to make their case in the coming weeks.

Schumer hasn’t paid as much attention to climate change in the past as progressives would like, but for the environmental community, the ACE rule vote represents a step in the right direction in the Senate, said RL Miller, political director of Climate Hawks Vote.

"We all know that Mitch McConnell is the grim reaper and nothing ever gets done in the Senate, but Schumer has been like a pallbearer at the funeral of action in the Senate," Miller said. "He hasn’t been fighting, and so I’m honestly heartened to see him do something. Anything."

Shorter term, the ACE rule vote could also have implications for swing-state Republicans who have attempted to flaunt their green credentials in the lead-up to 2020, including Sens. Thom Tillis of North Carolina, Cory Gardner of Colorado and Susan Collins of Maine.

The League of Conservation Voters told senators it is very likely to use the vote in calculating its National Environmental Scorecard, an annual grading of every lawmaker’s major votes on environmental policy.

"This rule, more accurately titled the Dirty Power Scam, is part of a dangerous pattern of this administration ignoring science and favoring polluters over the public interest," LCV President Gene Karpinski wrote in a letter to senators yesterday.

"This rule does nothing to fight climate change or protect communities from toxic pollution, and it lets fossil fuel-fired power plants off the hook to clean up their carbon pollution," he said.

"The Dirty Power Scam would put no meaningful limits on carbon pollution, and, in fact, could lead to more pollution in many parts of the country than if there were no standard at all. It will simply extend the lives of dirty coal plants rather than accelerate the transition to cleaner energy sources like wind and solar."

The oil and gas industry has taken notice of the vote, too.

The American Petroleum Institute’s members could stand to benefit from a policy like the Clean Power Plan that would replace coal with natural gas for electricity generation at a large scale, but the group opposes the rule and argued that it is unnecessary.

Ironically, Parker hit on a point that some environmentalists are also thinking about: Things have changed since the CPP was first announced.

The Trump EPA analysis of the ACE rule projected that it would cause power-sector emissions to fall 35% by 2030, slightly more than the 32% drop laid out under the CPP.

But nearly all of the drop under ACE is expected to come from voluntary changes by power companies moving away from coal, and not the regulation (Climatewire, June 20).

"I do think that it reflected what was politically feasible at the time, but I also think that the science has moved and the politics have moved," Miller said of the CPP.

If Democrats were to control both chambers and the presidency after 2020, environmental groups would likely expect them to enact something much more aggressive.

To that point, the Democratic House has not moved to repeal ACE, and lawmakers said yesterday they hadn’t heard about a CRA resolution on the horizon.

House Select Committee on the Climate Crisis Chairwoman Kathy Castor (D-Fla.), who has led many of Democrats’ climate messaging exercises this Congress, said she isn’t planning to push for a vote on the ACE rule, preferring instead to focus on her panel’s work to draft a climate action plan by early next year.

Some Democrats also do not like the CRA, which Republicans used in 2017 to repeal more than a dozen Obama administration rules.

Still, Whitehouse and environmental organizations argued that it’s worthwhile for the Senate to make its voice heard.

"The fossil fuel industry has more or less exhausted its bag of rhetorical denial tricks, so they don’t have a lot to say right now," Whitehouse said. "And their best outcome is for us to be silent."