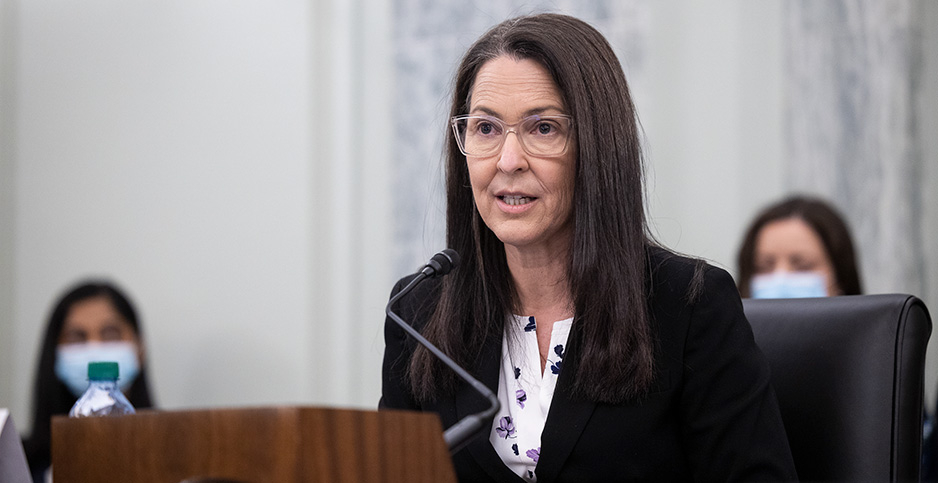 Shannon Estenoz, nominee for Interior assistant secretary of fish and wildlife and parks, during her confirmation hearing. Francis Chung/E&E News

The Biden administration continues to fill out its environmental roster, as the Senate last night confirmed several Interior Department and EPA nominees.

Without any of the conflict that has dogged some other nominees, the Senate by voice vote confirmed Florida native Shannon Estenoz as Interior’s assistant secretary for fish and wildlife and parks. She is a longtime Everglades expert who enjoyed home-state Republican support.

"Jobs, infrastructure, conservation and restoration can and should go hand in hand," Estenoz told lawmakers.

A fifth-generation native of Key West, Estenoz formerly was chief operating officer of the nonprofit Everglades Foundation before joining the Biden administration in January as an Interior principal deputy assistant secretary. The post oversees the National Park Service and the Fish and Wildlife Service.

Estenoz also has held positions with the World Wildlife Fund and the National Parks Conservation Association, and served on the governing board of the South Florida Water Management District.

"My work in the Everglades was ideal training for the role of assistant secretary," Estenoz said. "I spent more than two decades in the trenches of collaborative conservation, ecosystem restoration, species recovery, water management, invasive species response and national park stewardship."

Asked about efforts to streamline the National Environmental Policy Act process, Estenoz stressed that she has "been on all sides" of how it does and doesn’t work.

"I’ve been a customer waiting for a review to be finished, and I’ve been involved in the development of them," Estenoz said, "so I’m sensitive to how long an analysis can take."

Estenoz said that increasing access to parks and refuges will get her sustained attention.

Amin is currently at the White House, serving as deputy director of the Office of Administration. He was also part of Biden’s transition team, including working on the vetting operations team.

In addition, Amin served as chief financial officer for the Executive Office of the President during the Obama administration.

He spent much of his career, however, as an appropriations attorney at the Government Accountability Office, which included a detail to the Senate Interior and Environment Appropriations Subcommittee, where he helped draft EPA’s fiscal 2020 appropriation.

He is the fifth Biden nominee for EPA confirmed by the Senate.

Other nominees confirmed by the Senate yesterday include: