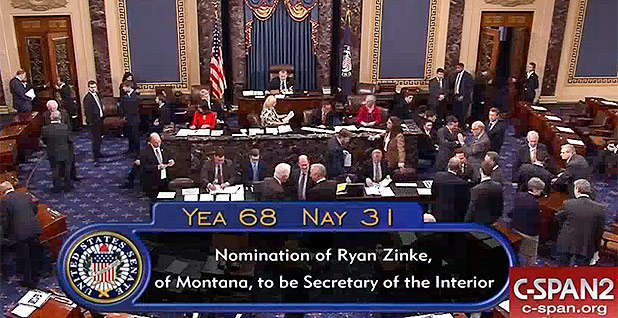 Zinke, who has said he opposes selling off federal lands, has positioned himself as a conservationist in the model of President Theodore Roosevelt.

The Montanan was able to attract 16 Democratic votes, among them Sen. Ron Wyden of Oregon, who had abstained from voting on Zinke’s nomination in committee and voted "present" in a procedural roll call Monday over concerns that Zinke backed transferring the Agriculture Department’s Forest Service to Interior.

Wyden said today that after several discussions with Zinke, he was assured that the congressman "will focus on doing his job, which includes protecting our special places and managing the forests already within the Interior Department’s control, instead of engaging in senseless reorganization of bureaucracies."

Sen. Angus King (I-Maine), who caucuses with the Democrats, also voted for Zinke.

Nevada freshman Sen. Catherine Cortez Masto was one of many Western Democrats who crossed the aisle to support the first Montanan Interior secretary. She said his Western roots were key to her vote. "I’ll be able to work with him," she told E&E News.

Cortez Masto said she had also made clear to Zinke that "Nevadans support Gold Butte [National Monument], and we’d like to keep it that way."

During his confirmation hearing, Zinke strongly suggested that the Trump administration would take the unprecedented step of reversing some national monuments like Gold Butte that were designated by President Obama under the authority of the Antiquities Act.

Sen. Thom Tillis (R-N.C.) told E&E News he thought that Zinke will "do a good job of reorganizing the department, and maybe focusing on the states where we need better presence," adding that he believed the new secretary was "going to be very responsive."

But some Democratic lawmakers remained concerned about Zinke’s priorities and how his approach to public lands might jibe with the White House’s positions.

Sen. Ben Cardin (D-Md.), whose state is home to many federal workers, said he was worried how a possible department reorganization could affect Interior’s mission and employees, as well as any potential agency budget cuts or "opening up" of environmentally sensitive areas.

Energy and Natural Resources ranking member Maria Cantwell (D-Wash.), who voted against Zinke, said today that one of his challenges as secretary will be to "stop the Trump administration from overriding very sacred environmental laws on clean water and clean air as it relates to federal land and keep and preserve things that are unique about our pristine areas, like Bears Ears [National Monument]."

Obama late last year designated Bears Ears in Utah, sparking controversy among those who want the federal government to play less of a role in managing such lands.

Senate Energy and Natural Resources Chairwoman Lisa Murkowski (R-Alaska) said in a statement after the vote today that she was "hopeful" that his confirmation "will mark the start of a new era for the Department of the Interior that is defined by greater cooperation with Congress, the states, and the local residents affected by its decisions."

The National Ocean Industries Association said Zinke "brings the promise of dawn after eight years of darkness for the offshore energy industry." But Sierra Club Executive Director Michael Brune said Zinke’s confirmation "jeopardizes the future of our great outdoors, and the people, wildlife, and economies that depend on them."

Other groups expressed support for Zinke, tempered by a wait-and-see approach.

"His opposition to selling off federal lands and support for the Land and Water Conservation Fund represent a commitment to the conservation legacy of Theodore Roosevelt; however, his advocacy for greater state control of energy development on federal lands, votes against Endangered Species Act protections and expressed willingness to review past national park site designations could threaten that legacy," said Theresa Pierno, president and CEO of the National Parks Conservation Association.

The Bears Ears Inter-Tribal Coalition, a partnership of the Hopi, Navajo, Uintah and Ouray Ute, Ute Mountain Ute, and Pueblo of Zuni tribal governments, congratulated Zinke on his confirmation and invited him to meet with tribal leaders "before making any recommendations on Bears Ears National Monument," said Alfred Lomahquahu, vice chairman of the Hopi Tribe and co-chairman of the Bears Ears Inter-Tribal Coalition.

The upper chamber started debate on the nomination of Ben Carson as secretary of Housing and Urban Development after confirming Zinke this morning. Tomorrow, the Senate plans to consider former Texas Gov. Rick Perry’s (R) nomination as Energy secretary.

Zinke, a former Navy SEAL, has helped kidnap an accused war criminal, keeps an arsenal of serious knives nearby when he’s working and answers to "Z Man." He’s an avid hunter and has caught flak for reports that he committed travel fraud during his SEAL days (Greenwire, Jan. 16).