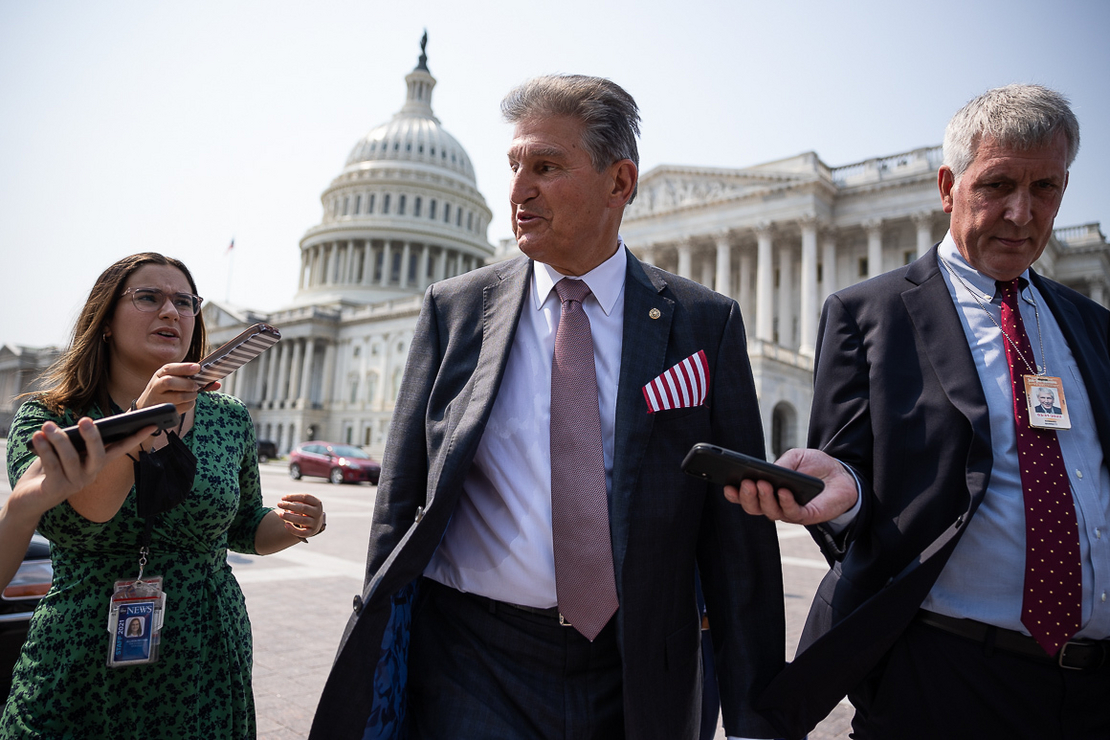 Senate Democrats yesterday shrugged off criticism from Senate Energy and Natural Resources Chair Joe Manchin (D-W.Va.) about their $3.5 trillion budget reconciliation plan, instead signaling they are continuing to work on the bill’s sweeping climate goals.

“I can’t respond to everything Joe Manchin says. That’s not my job,” said Sen. Martin Heinrich (D-N.M.), a senior Energy and Natural Resources Committee member who favors climate provisions in the package that the West Virginia senator panned over the weekend.

Senate Budget Chair Bernie Sanders (I-Vt.) said yesterday he expects the legislation will pass with significant climate provisions. Among those favored by Democrats are the Clean Energy Performance Program, or CEPP; a new civilian climate corps; and an energy tax code overhaul.

“A lot of things are going to have to be worked out, a lot of arguments will be made, it’s not just Joe Manchin … but at the end of day, we’re going to do what we did do with [the pandemic relief bill] and pass something of enormous consequence for working families [and] climate change,” Sanders said.

Manchin, appearing on several Sunday news shows, said there was no way he would support a $3.5 trillion package envisioned by Democrats. He was also highly critical of one of the plan’s central climate proposals, saying that paying utilizes to produce more green energy makes “no sense at all” and could leave the nation’s power supply vulnerable (E&E Daily, Sept. 13).

White House national climate adviser Gina McCarthy, a former EPA administrator, avoided criticizing Manchin directly in an appearance on CNN yesterday and called the coal-state senator a “strong partner.” She said she expects to stress to him that for every $1 dollar spent today on climate it will save $6 dollars in the long run.

“We fully intend to work with the senator,” said McCarthy, who said the CEPP is not simply paying utilities to produce clean energy, but it’s ultimately going to lead to a safer and healthier future for all Americans by curbing emissions.

In a letter to her Democratic colleagues yesterday, House Speaker Nancy Pelosi (D-Calif.) did not make mention of Manchin but seemed to be prepping her caucus for some disappointment. "As you are aware, we have certain limitations in terms of Senate rules," she wrote. "But we have no limit to our vision to pass transformative legislation For The People."

Like Sanders, she also pointed to the COVID-19 legislation that passed Congress via reconciliation earlier this year, saying Democrats would "build on this progress," while vowing to "protect our planet with climate action."

Sen. Ben Cardin (D-Md.), a member of both the Senate Finance and Environment & Public Works committees, said climate is “embedded” in just about every Democratic proposal, including both the bipartisan infrastructure bill and reconciliation package.

Cardin said he was not sure when the Senate Finance panel would unveil its tax provisions for the reconciliation bill but acknowledged there would be some differences with the House plan being marked up this week.

The senator said he does not expect Finance to formally mark up the bill — since the panel is split 50-50 — but said Senate and House tax writers have already begun negotiating over a final version.

“We’re not in total agreement, it’s been a lot of give and take," Cardin said. "I think the cooperation has been good.”

With the Senate divided 50-50, Manchin’s opposition would be enough to sink the package, which has no GOP support. Unlike most Senate legislation, which requires 60 votes to overcome a filibuster, budget reconciliation bills can pass with a simply majority.

Republicans for their part have largely been on the sidelines, criticizing the package and hoping Manchin’s resistance holds.

“I don’t think Sen. Manchin is going to blink. I say that because I think he has made some fairly bold statements [against reconciliation] and he did not have to do it that way,” said Sen. John Kennedy (R-La.), a top energy appropriator.