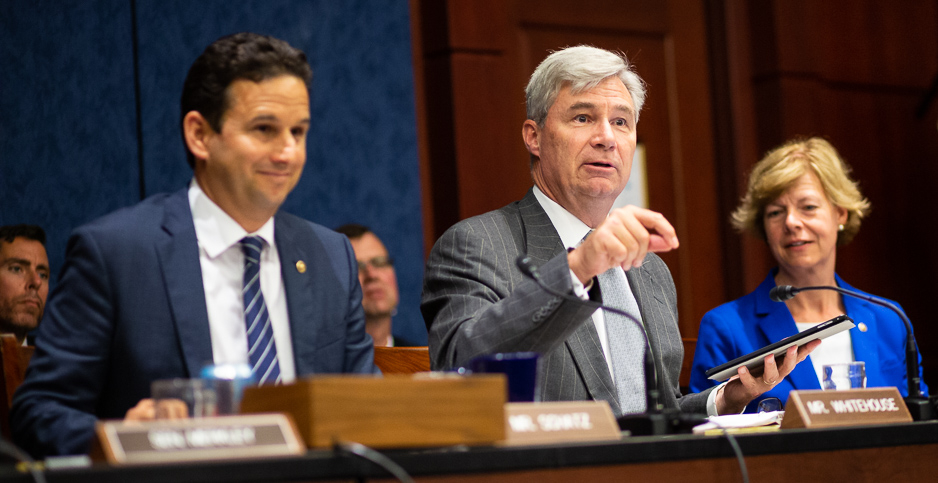 Senate Democrats today issued a 260-page climate report recommending trillions of dollars in investments and a wide-ranging federal effort to slash greenhouse gas emissions, a preview of the party’s priorities if it’s able to claw back control of government in November.

To reach net-zero emissions by 2050, the report says, the country will need a plethora of new regulatory policies and federal spending on climate that amounts to at least 2% of gross domestic product annually — roughly $400 billion based on current GDP estimates.

"Those who deny the scientific evidence threaten all of us, and the report makes clear that immediate, focused action is critical to avoid the worst climate effects and achieve a clean energy future," Senate Minority Leader Chuck Schumer (D-N.Y.) said on a call with reporters this morning.

The report, a product of the entirely Democratic Special Committee on the Climate Crisis, offers a look into Schumer’s thinking ahead of a crucially important election for climate advocates.

Should Democrats take back the Senate in November, progressives expect the party to make a play at major climate legislation or, at the very least, incorporate the issue heavily into the next Congress’ response to the COVID-19 pandemic.

The recommendations are largely comparable to the climate plan from former Vice President Joe Biden’s presidential campaign and from a similar report released by the House Select Committee on the Climate Crisis this summer (Greenwire, June 30).

Schumer, for his part, has been promising a climate bill over the last year if he becomes the majority leader, and to that end, he appointed Sen. Brian Schatz (D-Hawaii) to lead the special committee.

"What the work of this special committee reflects is that when Democrats retake the majority in the Senate, we will be unified to move swiftly on legislation to tackle the climate crisis," Schumer said.

"Passing climate legislation will be a top priority for Senate Democrats and for me if we regain the majority and I become majority leader," he said.

It would demand that 40% of the benefits from federal climate investments go to "communities of color and low-income, deindustrialized, and disadvantaged communities."

A big chunk of that cash would also go to Department of Energy research and development. The report points to a paper from the think tank C2ES that found Congress should increase the federal climate research budget to $20 billion per year by 2030, including $2 billion annually for the Advanced Research Projects Agency-Energy.

Unlike the select committee report on the House side, the document doesn’t point to specific bills, but it does contain a series of broad policy prescriptions for each sector of the economy.

For the power sector, for instance, the report recommends "a federal clean energy standard, emission standards, a carbon price, and/or other market mechanisms to ensure the rapid adoption and scale-up of proven technologies today."

That’s rather open-ended, but Schatz said that "what matters most to us is scale."

"We have a menu of policy options, but the threshold question is whether or not it is big enough and bold enough to solve a planetary crisis," Schatz said. "We think there are a couple of different pathways, and we will maintain flexibility going into the next Congress."

The report similarly leaves the door open for nuclear and carbon capture — two longtime targets of progressive climate advocates — to be part of the solution.

"We also need to develop ways to reduce the price of on-demand, low-carbon generators, such as geothermal, advanced nuclear, biomass, or fossil generation paired with carbon capture and storage," the report says.

"Since we can’t know yet which of these technologies will provide the most affordable path to decarbonizing the last fraction of electric sector emissions, we should develop all potential options now," it says.

The report includes an extensive section on the fossil fuel influence on climate politics.

After the 2010 Citizens United Supreme Court decision, which opened the door to unlimited election spending by corporate interests via independent expenditures, Democrats argue that fossil fuel companies were able to use front groups and dark money to pull the Republican Party toward climate denial.

The fossil fuel industry has also long run public relations campaigns against climate policy and funneled money to organizations that cast doubt on the science, despite knowing about the potential climate impacts of their products for decades.

In recent years, trade associations like the U.S. Chamber of Commerce and American Petroleum Institute have been some of the most powerful opponents to climate policy on Capitol Hill.

"If the United States Congress is to pass comprehensive climate legislation — legislation that will reduce carbon emissions to truly safe levels — stakeholders will need to address this fossil fuel-funded web of denial and obstruction," the report says.

As a solution, the report proposes new federal rules and legislation to make lobbying and political activities more transparent.

The Securities and Exchange Commission, for instance, could promulgate a rule "to require registered companies to disclose all of their spending on political influence activities, including money funneled to trade associations and other politically active non-profits," the report says.

Policies like that could make it much easier to overcome long-standing political hurdles on climate, said Sen. Sheldon Whitehouse (D-R.I.).

"We have all had the experience of talking to Republican senators who would willingly to help on a climate bill, and Chuck and I have been around long enough to remember when there was constant bipartisan activity on climate," Whitehouse said.

Democrats are unlikely to have 60 votes in the Senate, even if they sweep in November, meaning Republicans could still halt climate policy in its tracks using the filibuster.

Whitehouse said Democrats could look to budget reconciliation, a process that allows the Senate to pass certain budgetary bills by a simple majority.

But Schumer did not rule out tossing out the filibuster to pass a climate bill, an idea progressives have long cheered.