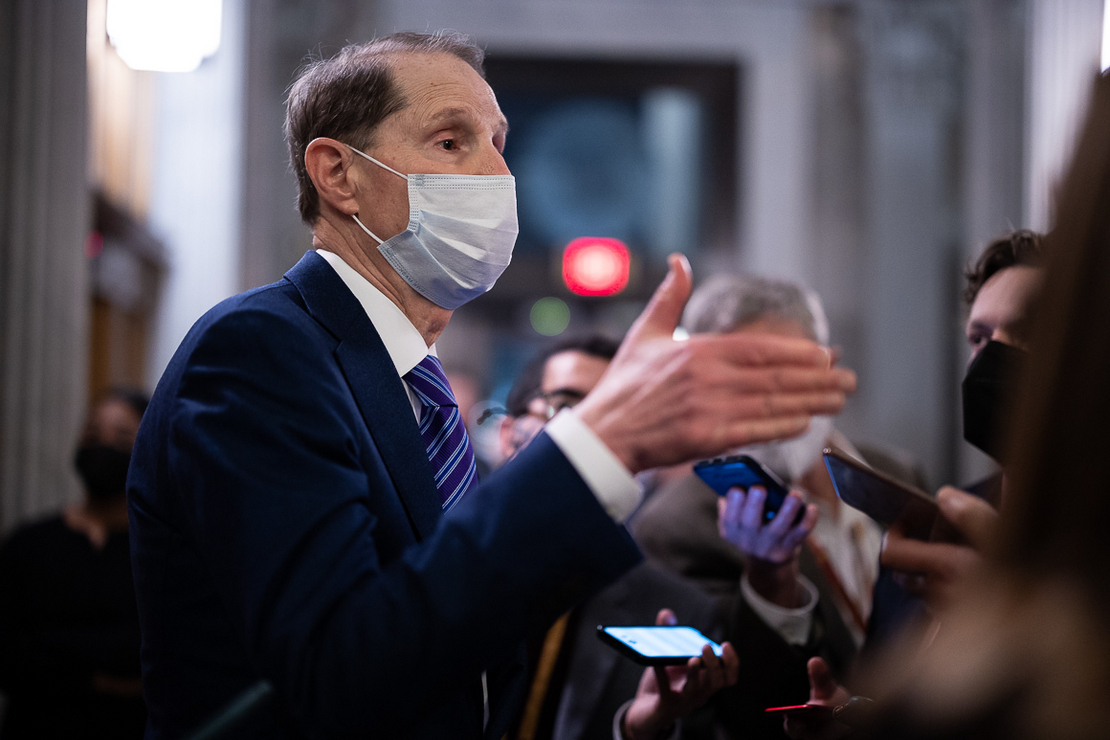 Senate Democrats released a core piece of their $1.7 trillion social spending and climate bill this weekend as they try to stick to a self-imposed Christmas deadline to pass the legislation.

At the same time, Republicans are warning about the total cost of the bill, pointing to a recent Congressional Budget Office study they requested that found the bill would cost $3 trillion over 10 years if all the provisions were made permanent.

"I hope that this will be a showstopper for Build Back Better,” Sen. Lindsey Graham (R-S.C.) said yesterday on “Fox News Sunday,” referring to the bill’s title and aiming to convince Democratic moderates to break ranks.

That includes leaving out the House’s proposal to expand the deduction on state and local taxes, known as SALT, and easing some limits on corporate interest deductions.

Key portions of the tax provisions are likely to change in the coming days and weeks as senators continue negotiations, with an eye toward getting holdouts — mainly Energy and Natural Resources Chair Joe Manchin (D-W.Va.) — on board. President Biden said he plans on chatting with Manchin this week.

As talks continue, the Senate parliamentarian will keep vetting the reconciliation package. Under the Byrd rule, named for the late Senate Majority Leader Robert Byrd (D-W.Va.), each provision must have some direct impact on federal spending or revenue.

The process allows Republicans to challenge sections they believe do not conform with the rules. Senate Parliamentarian Elizabeth MacDonough makes the final calls.

“The Finance Committee has made targeted improvements to the Build Back Better Act, and is ready to move forward in this process,” Wyden said in a statement.

The reworked language would make relatively few modifications to the clean energy and electric vehicle provisions of the House-passed bill, despite weeks of haggling between Wyden and Senate moderates.

The draft would keep expansions of the electric vehicle tax credit in place, including a $4,500 incentive for EVs made in unionized facilities. Manchin, as well as non-union EV manufacturers, opposes the union credit, which would be a boon for the biggest U.S. automakers.

And notably, the Senate draft would offer a mixed bag for energy industry groups. It contains a 30 percent investment tax credit for existing hydropower facilities that the industry has been lobbying on for months. Wyden said last week that he was pushing to add it to the bill (E&E Daily, Oct. 26).

But the Finance Committee didn’t make a modification to the bill’s 45Q tax credit that carbon capture backers had been seeking in recent days.

The House bill would raise the incentive from $50 per ton of carbon captured to $85. But to qualify for the credit, a fossil fuel or industrial facility would have to capture at least 75 percent of its carbon.

Industry and advocacy groups have been asking lawmakers to nix that requirement, arguing it could undermine the credit (E&E Daily, Dec. 9).

The Energy and Natural Resources and the Environment and Public Works committees are expected to release their latest “Build Back Better Act” versions this week and to start their “Byrd baths.” Last week, Democratic staffs for both panels met with the Senate parliamentarian to review proposed bill text.

Manchin and EPW Chair Tom Carper (D-Del.) both told E&E News last week they’d heard those meetings went smoothly. But neither would predict what would happen in the coming days, when the Democratic and Republican leaders of each committee give side-by-side presentations to the parliamentarian to argue in favor or against the germaneness of specific provisions.

One provision that remains a question mark is language in the House-passed bill that would ban drilling in the Arctic National Wildlife Refuge, directly repealing a portion of the Republicans’ 2017 tax law, which opened ANWR to extraction activities. The 2017 law was also advanced through the reconciliation process.

Sen. Lisa Murkowski (R-Alaska), who is close to Manchin, has been tight-lipped about her strategy for making sure the ANWR piece gets taken out. Manchin has voted in favor of ANWR drilling in the past, and said last week he “hasn’t really gotten into that” portion of the reconciliation bill but hinted there could be some issues.

“I understand there’s some ramification with the courts on contracts that were there and things on that front,” said Manchin. He was likely referring to the ANWR lease sale then-President Trump presided over in his final weeks in office, before President Biden’s executive order freezing all the oil and gas activity in the state’s coastal plain.

Sen. Dan Sullivan (R-Alaska) suggested he was working on persuading Manchin to come down against the ANWR restrictions in the new reconciliation legislation, by either allowing it to fall by the hand of the parliamentarian or cutting it out himself in draft bill text.

“He’s been meeting with some of my constituents,” Sullivan told E&E News last week. “And, you know, Joe Manchin is a very busy guy. A lot of people want to meet with him — It’s probably harder to get a meeting with him than Joe Biden.”

Sen. Kevin Cramer (R-N.D.), a member of EPW, said he expects Republicans to mount challenges to multiple provisions, including the proposed fee on methane emissions from the oil and natural gas industry and the expanded electric vehicle tax credit. Both policies should not be allowed under reconciliation because they’re not mainly about budgetary matters, he argued.

Cramer said if the parliamentary challenges fail, Democrats’ policies "for sure" will be a major issue in next year’s elections.

While saying the Byrd bath issues are a long way from settled, Cramer suggested the longer Democrats wait, the worse it will get for them. "Garbage that lays around a long time gets smellier by the day," he said.

‘This bill is paid for’

While the GOP hopes to remove some big-ticket items from the legislation through the Byrd baths, it’s also sharpening its focus on the bill’s costs. Graham, in his appearance on Fox News, pointed directly to Manchin’s concerns about “budget gimmicks” that could hide its costs.

“Here’s my message to the Democratic Party: Quit lying about this bill. They should revote it in the House,” he said.

Democrats and the White House have consistently argued that the bill is fully paid for by its tax increases, and challenged the CBO report.

“This bill is paid for. It’s paid for by taxing the wealthiest. And it’s paid for to help regular people,” Sen. Amy Klobuchar (D-Minn.) said on CNN’s “State of the Union” yesterday.

“It is paid for, and it is not inflationary. To the contrary, it’s going to help us with the inflation issue.”

Even with the CBO report, Klobuchar was confident the bill would pass the Senate with Manchin’s support.