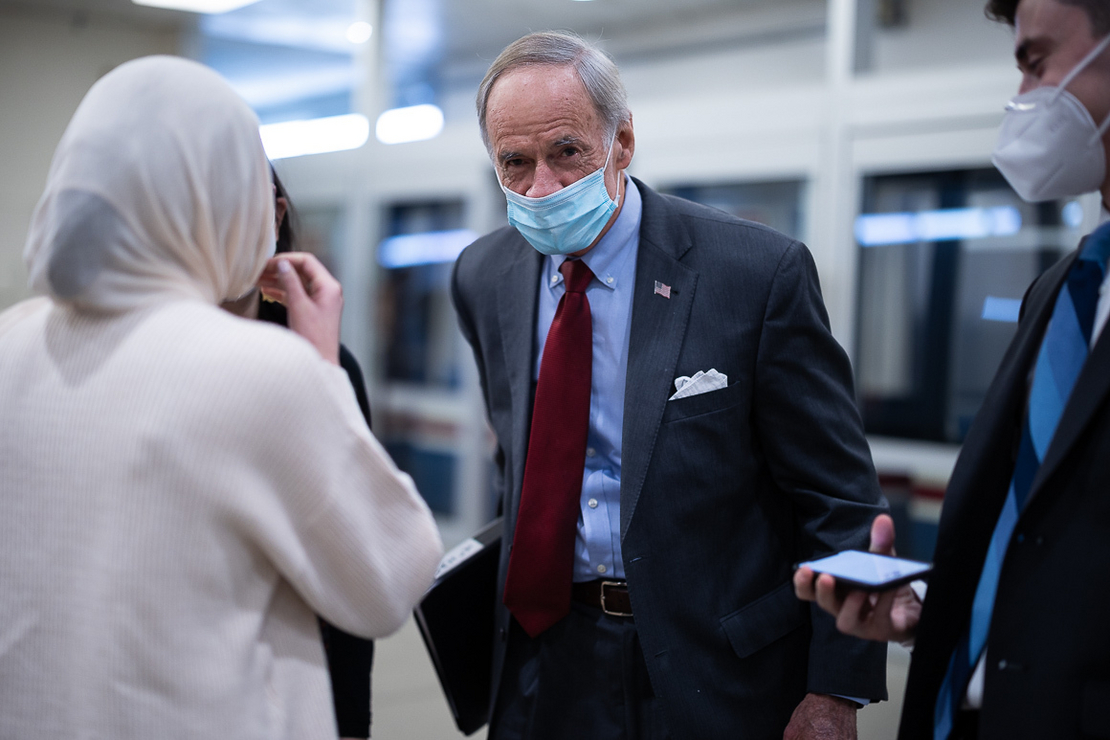 Senate Environment and Public Works Chair Tom Carper (D-Del.) says he’ll be talking with people today about his panel’s portion of the stalled, $1.7 trillion climate and social spending bill. Sen. Ron Wyden (D-Ore.), the chair of the Senate Finance Committee, claims he talks about the “Build Back Better Act” “every day.”

Yet both lawmakers were noncommittal about whether they can or will meet House progressives’ challenge to advance the centerpiece of President Biden’s domestic agenda in time for his State of the Union address on March 1.

So too were several other Senate Democrats who held leadership roles or key negotiating positions surrounding the drafting of the reconciliation package.

Their lack of answers about any next steps for reviving the reconciliation package from legislative purgatory — and lack of clarity on any general timeline —- paint a grim picture of its fate.

“We’ll vote … when we have the votes,” said Sen. Brian Schatz (D-Hawaii), who, when asked if a March 1 timeline was feasible, prefaced his response with an exaggerated shrug.

“It might be sooner than March 1, it might be after March 1,” Schatz said. “I don’t know when it’s going to be. But I think if there’s one thing we learned from last year, it’s that artificial deadlines make us look silly.”

Yesterday, a little under a week since Congressional Progressive Caucus Chair Pramila Jayapal (D-Wash.) demanded that the Senate negotiate a scaled-back spending bill and pass it within the month, a group of House Democrats from “the front lines of the climate crisis” held a virtual press briefing calling on the Senate not to give up on the effort.

The bill that passed the House in November would, among other things, invest roughly $550 billion in combating the climate crisis.

“There is broad consensus among Democrats on these climate priorities,” said New Democrat Coalition Chair Suzan DelBene, a moderate from Washington, during the press briefing, “and we’ll do everything in our power to ensure the ‘Build Back Better Act’ prioritizes climate and is signed into law.”

“In the two months since the House passed the Build Back Better Act, mid-December tornadoes killed at least 78 people in Kentucky and late December wildfires destroyed 1,000 homes in Colorado,” the members wrote. “The time for you to work with the Senate to finalize and pass the strongest and most comprehensive version of the Build Back Better Act that can get 50 Senate votes is right now.”

They added, “We must seize this moment for all Americans and enact these vitally important climate investments into law in the coming weeks.”

Talk, but no action — yet

Wyden told reporters he was just as eager to plow ahead.

Senate Budget Chair Bernie Sanders (I-Vt.) didn’t have a comment on meeting a March 1 timetable, nor did he have an answer for whether Senate Majority Leader Chuck Schumer (D-N.Y.) would stand by his promise to hold a standalone vote on the House-passed bill in the coming days.

“What I can tell you is we’ve been talking about it for six months,” Sanders said. “I think the American people want action, and I hope we can provide that action.”

Ultimately, action still largely hinges on a willingness from moderate Sen. Joe Manchin (D-W.Va.) to come to the table. The pivotal swing vote in a 50-50 Senate, Manchin pumped the breaks on the reconciliation bill in December, citing continued concerns about the price tag and specific policy provisions largely unrelated to the climate portion.

Speaking to reporters on Capitol Hill yesterday, he gave no indication that serious negotiations had resumed or were on the brink of continuing.

“There’s not been any formal … sit-down meetings or things of that sort,” Manchin said.

As the chair of the Senate Energy and Natural Resources Committee, Manchin said in January he’d be open to passing the climate provisions of the reconciliation bill separately; Biden later said the massive package could indeed be advanced in “chunks,” singling out the climate title specifically.

Yesterday, Manchin continued to lay out his position that Congress should prioritize building new pipelines, creating more robust storage and transmission for renewables, and protecting the integrity of “the cleanest … possible version” of the fossil fuel industry.

“You take the United States of America out of the fossil industry right now, I guarantee the world and the climate will get more challenged and dirtier,” he said.

Asked specifically what he made of Manchin’s desire to ease pipeline construction and craft policies sympathetic to the fossil fuel sector — positions that would likely be anathema to progressives — Wyden said he wasn’t familiar.

But he did note that a piece of the clean energy tax credits he championed through the Senate Finance Committee, which would create technology-neutral incentives, were “right at the heart of Sen. Manchin’s interest.”