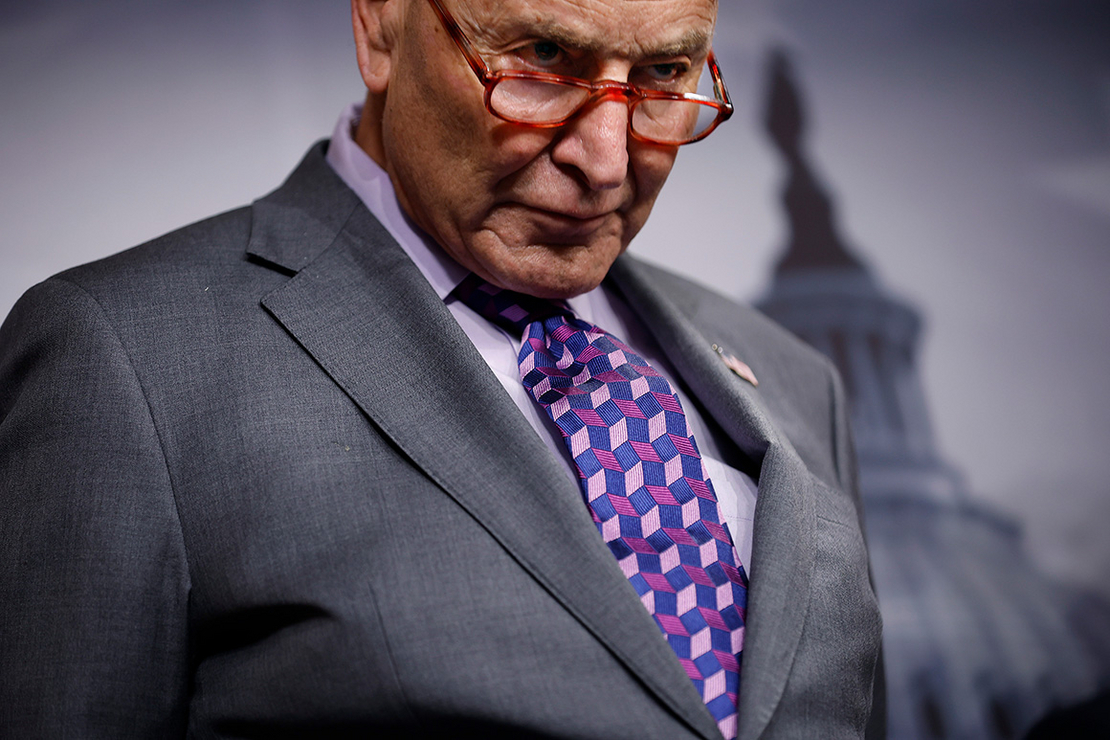 An increasingly vocal group of Senate Democrats wants to keep negotiating with Sen. Joe Manchin on a climate bill, but they face massive hurdles, and President Joe Biden is expected to move ahead with executive action.

But Schumer said he would “keep fighting” on climate, keeping alive slim hopes that Democrats can still negotiate a deal on clean energy and taxes with Manchin (D-W.Va.) if next month’s inflation numbers come down — a prerequisite from Manchin.

“We’re urging the administration to do things that it can do administratively,” Schumer told reporters. “We’re going to look at everything that we can do.”

He added, “There is always a second reconciliation bill available to us.”

That happy talk on another round of budget reconciliation this fall would be a massive lift, taking up a great deal of Senate floor time. Moreover, it’s not evident Democrats have a real shot at striking a deal with Manchin, who had been negotiating privately with Schumer for months. Some are already acknowledging that getting a climate bill done looks highly unlikely.

Meanwhile, Biden is slated to announce new executive actions on climate today, effectively an acknowledgment of the collapse of a legislative path.

In a potential sign of where things stand, multiple Democrats said reconciliation — and specifically the climate provisions — was not a major topic of discussion during their weekly caucus lunch yesterday.

Senate Environment and Public Works Chair Tom Carper (D-Del.), however, said he gave his colleagues a handout listing “10 or 12 points” about the heat wave gripping Europe, where temperatures have soared over 100 degrees Fahrenheit and set all-time records.

“I said, ‘If this doesn’t get our attention, there’s something wrong,'” Carper told reporters.

Carper said he’s not ready to give up on a legislative approach, saying that the Senate still has “a couple more weeks to do our job.”

“Given what’s going on in Europe, and in this country, literally in real time, if we walk away from here without dealing with climate change in some kind of significant way, heaven help us,” Carper said.

“We’re much closer to a climate deal than people realize. Let’s not throw in the towel just yet,” Hickenlooper tweeted. “Fighting climate change is more important than any August recess.”

Hurdles for any new bill

It wouldn’t be summer in the Senate without at least one entreaty to stick around in August, but an attempt to finish off the climate bill would face an immense uphill climb.

For one thing, plenty of Democrats want to simply take the drug pricing deal with Manchin because they can’t be sure what the inflation numbers will look like next month, or if the West Virginia Democrat would come back to the table after picking away at the bill’s climate policy for roughly a year (E&E Daily, July 19).

The Senate’s arcane rules and sluggish procedure are also a hurdle.

Passing the narrower drug pricing and health care deal would likely use up the budget reconciliation bill for the current fiscal year.

To get a new shot at a party-line climate bill, Democrats would need to pass a new budget resolution with reconciliation instructions for fiscal 2023, build out a bill from committees and, finally, pass the reconciliation legislation.

That would require multiple marathon Senate floor sessions — known as vote-a-ramas — and lots of procedural time leadership could otherwise use for nominations and other Democratic priorities.

Bill Hoagland, a budget expert and senior vice president at the Bipartisan Policy Center, told E&E News it would likely take at least a month, if not two, and some Democrats have already acknowledged that it would be a tall order.

With that in mind, many of the Senate’s top climate hawks have pivoted to calling on Biden to act through the executive branch by declaring a climate emergency, activating the Defense Production Act and quickly promulgating new pollution rules at EPA.

The president is set to do just that in an announcement in Massachusetts today, though he is expected to stop short of a climate emergency declaration.

The hope among climate-focused lawmakers is that Biden will stop approving fossil fuel projects and take a slew of broader actions because he no longer has to worry about securing a deal with Manchin.

“That potential to enact that legislation is dead,” Sen. Jeff Merkley (D-Ore.) told reporters this week. “But this also unchains the president from waiting for Congress to act.”

Still, Carper said he spoke privately with Manchin to make many of the same points he made during yesterday’s caucus lunch. Manchin, he said, “agreed that we agree.”

Indeed, Schumer and Manchin appeared close to a deal last week on a more than $300 billion suite of tax incentives for renewables, nuclear and hydrogen, among other things.

Manchin, however, said he does not believe Congress should move forward with the clean energy incentives — or tax hikes on corporations and the wealthy to pay for them — after the consumer price index showed inflation had risen to 9.1 percent in June.

Carper and other Democrats said they are still trying to make the case to him that the clean energy provisions would be deflationary and reduce dependence on fossil fuels that are subject to price swings.

Manchin, meanwhile, insisted yesterday that he “never left the table.”

“Let’s see what Congress does,” Manchin told reporters. “Congress has to work.”

Some Democrats have scoffed at that kind of wait-and-see talk from Manchin, likening it to Lucy pulling the football away from Charlie Brown (E&E News PM, July 15).

Schumer sidestepped a question yesterday on whether he views Manchin as an honest negotiator.

“Sen. Manchin and I have known each other a long time. We have many disagreements. I am very strenuous when I talk to him about my disagreements,” Schumer said. “But we always try to show each other respect.”