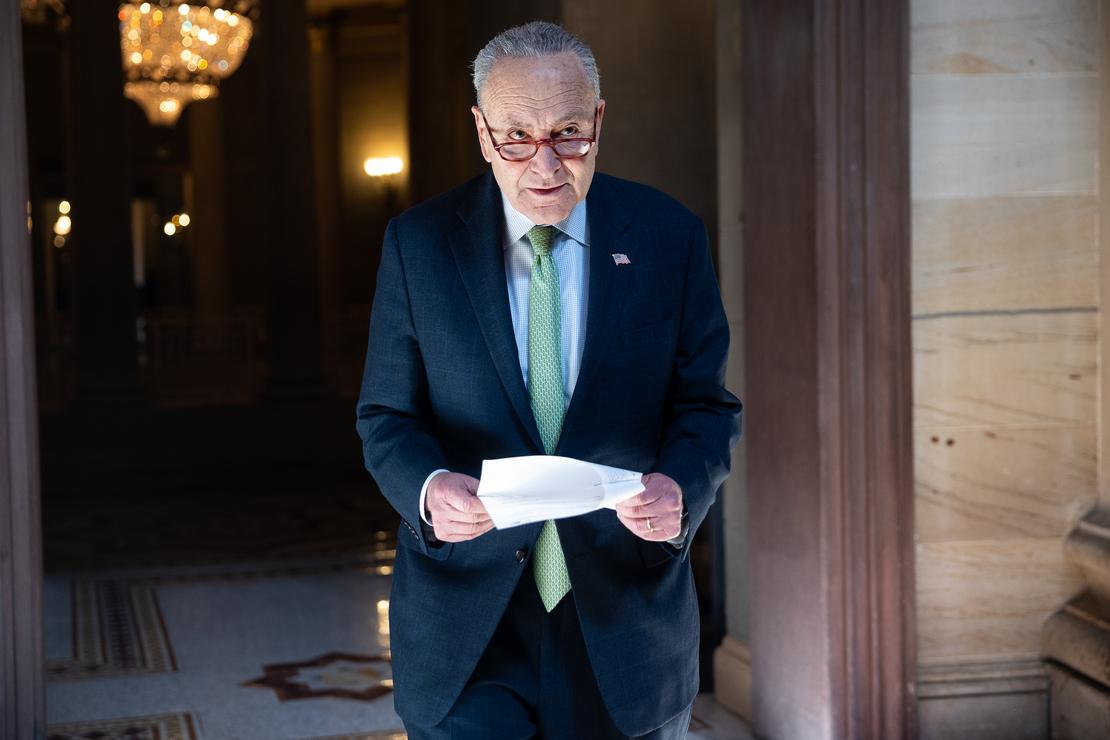 Senate Democrats will huddle tomorrow for a policy retreat that could serve as a building block for a renewed push on a host of climate-related spending originally contained in their stalled reconciliation package.

Senate Majority Leader Chuck Schumer (D-N.Y.) laid out in a “Dear Colleague” letter yesterday that the daylong summit would offer lawmakers the chance to look at policies that could help reduce the pains of inflation, including increasing energy costs.

“Our goal is to have the wages that have increased continue to go up and see costs go down so the average American has more money in their pocket,” Schumer said in his letter, echoing comments President Biden made in his State of the Union speech last week (Energywire, March 2).

Democrats originally set aside approximately $555 billion in climate and clean energy-related spending as part of last year’s reconciliation package. That total would represent the highest spending to fight climate change in the nation’s history.

After passing the House last fall, the measure stalled after Energy and Natural Resources Chair Joe Manchin (D-W.Va.) said he could not support the bill, citing inflation and debt fears.

Manchin in the aftermath of his rejection has offered indications that he could support a slimmed-down reconciliation package that acts as a revenue raiser and offsets the cost of clean energy and climate action. No new negotiations have started, however, Manchin confirmed last week (E&E Daily, March 3).

Schumer’s letter does not mention the stalled “Build Back Better” bill by name; Biden also did not cite the bill in last week’s speech before Congress. Instead, Schumer lists most of the provisions contained in that effort, but under new packaging that looks to address worries about inflation.

Climate spending remains a part of the mix.

“In reconciliation, Senate Democrats have introduced additional legislative proposals to lower the rising cost of energy, prescription drugs and health care, and the costs of raising a family,” Schumer said. “Senate Democrats are focused on delivering on our promise to fight these rising costs.”

The renewed push comes as a coalition of domestic solar manufacturers urged the White House to follow through on its efforts to unleash American-made solar panels.

In a letter to Biden, the group of 16 manufacturers is urging Congress and the administration to prioritize tax incentives for onshoring solar production that were included as part of the “Build Back Better” reconciliation package and its $325 billion in clean energy tax credits.

“We can deliver the very revitalization of American manufacturing and pride in stamping solar products ‘Made in America’ you so eloquently called for in your speech,” the groups wrote. “We encourage you to press forward to deliver this win-win for the economy and our fight against climate change.”

Such a provision, the groups said, could help the country meets its goals of 30 gigawatts of annual solar deployment by 2025, with 18,000 direct-manufacturing jobs and over 60,000 indirect jobs, according to the group’s estimates.

In the past few weeks, Democrats have said the Ukraine crisis highlights the need to invest in renewable energy as a way to shield the country from energy price shocks. The solar manufacturers point out that a great deal of solar production is conducted overseas and say the reconciliation bill “enhance competition throughout the solar supply chain.”