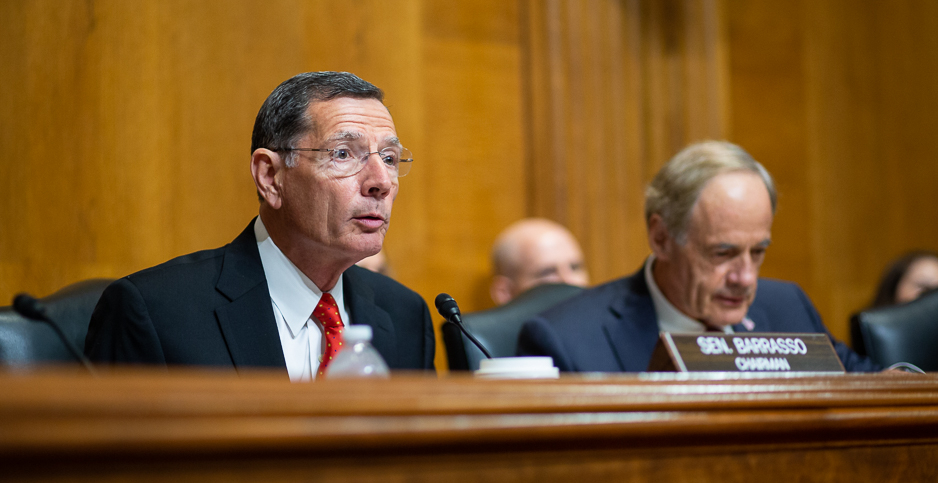 Sen. Tom Carper (D-Del.), the ranking member on the Environment and Public Works Committee, told E&E News he was looking at various state approaches to charging user fees on EVs — including annual fees or registration fees — as a means of raising revenue to pay for the five-year highway bill that passed the panel before the August recess.

"The principle is those who use roads, highways and bridges should help pay for them," Carper said yesterday. "Those who use vehicles that don’t use any gas or diesel need to find a way to help pay for it. The states have already experimented with that. So we have a lot of good examples from what states are doing."

EPW Chairman John Barrasso (R-Wyo.), who has sought to eliminate the federal EV tax credit, confirmed that new user fees are in the mix of possible pay-fors for the highway bill.

"There are a number of ways to do it, and we’re looking at that now," he told E&E News yesterday.

Many states were motivated to adopt the new fees because of declining gas tax revenue, which helps fund road repairs. EVs don’t pay the gas tax because they run on electricity rather than gasoline.

Chris Harto, a senior policy analyst at Consumer Reports and co-author of the analysis, said he would oppose new federal EV fees to fund the surface transportation bill.

"We generally don’t think that EV fees are the most efficient way to deal with this challenge," Harto said. "Congress hasn’t raised the gas tax in 26 years or to keep up with inflation or improvements in fuel economy.

"So they need to deal with bigger challenges than the small fraction of cars that are currently EVs, which make up well under 1% of the current fleet," he said.

Gina Coplon-Newfield, director of the Sierra Club’s Clean Transportation for All campaign, agreed with this assessment.

"Overall, we believe that now is the time to incentivize people to make the switch to cleaner vehicles, not penalize them for making that switch," she said.

Still, Coplon-Newfield praised EPW leaders for including the first-ever climate change title in the highway bill, which would provide $10 billion for improving the resilience of infrastructure, reducing transportation emissions and building EV charging stations along highways (Greenwire, July 29).

The highway bill would also establish a 50-state pilot program that aims to transfer highway funding from the gas tax to a vehicle-miles-traveled approach, but in the interim Carper said new EV fees can help fund road construction.

"That’s 10 years from now or so," he said. "We’ll figure out a way in the interim for those vehicles that don’t use gasoline to pay their fair share."

Earlier in the week, Carper also said that hydrogen and natural gas-powered vehicles also "need to make some payment" toward road upkeep.

Although the highway bill sailed through the EPW Committee without opposition in July, there is less agreement on how to pay for the measure.

The Highway Trust Fund will pay for part of the $287 billion measure, but lawmakers will still need to find more than $100 billion in offsets to cover the gas tax shortfalls. The tax has not been increased or indexed for inflation since 1993.

Carper, also a member of the Finance Committee that will have to come up with offsets, has declined to say how much revenue must be raised.

But the Congressional Research Service last week estimated the shortfall for just the highway provisions in the Senate’s five-year bill at $79 billion. The service noted that amount will rise when public transit provisions — funded by a separate mass-transit Highway Trust Fund account — are included.

Carper and Barrasso said this week that talks with Grassley about paying for the measure will continue.

Carper, who also said he planned to talk with Transportation Secretary Elaine Chao about the highway bill this week, has declined to rule out some form of a gas tax increase.

"I think everything’s on the table," he told reporters earlier in the week.

On the other side of the Capitol, House lawmakers are also working on a surface transportation reauthorization bill, albeit at a slower pace. DeFazio has said his panel will seek to draft legislation by the end of this year or early next year.

At a hearing yesterday held by the T&I Subcommittee on Highways and Transit, DeFazio expressed frustration that Congress can’t seem to agree on funding.

"Around here, we’re paralyzed," he said. "My God, we can’t figure out how we’re going to pay for this."

He added, "The Senate passed a bill; it’s got some decent policy in it. It’s got a little more spending. But the leaders of the Senate have said, ‘Oh, it’s impossible to pay for. We don’t know how we’re going to pay for that.’"

Norton noted that in the absence of federal action, a number of states have recently moved to increase their own gas taxes, including red states like Indiana, Nebraska and South Carolina.

"How come in red states, they’re not afraid to raise the gas tax, but they send people to Congress who are?" she asked. "So we’re stuck on stupid when it comes to revenue."

Rep. Mark Meadows (R-N.C.) pushed back, saying he would have trouble convincing his constituents to back a gas tax hike, especially if it would primarily benefit cities in other parts of the country.

"It’s very difficult for me to go back to North Carolina … and suggest that what we’re going to do is raise taxes so that you can have less congestion in your cities," said Meadows, a leader of the conservative Freedom Caucus.