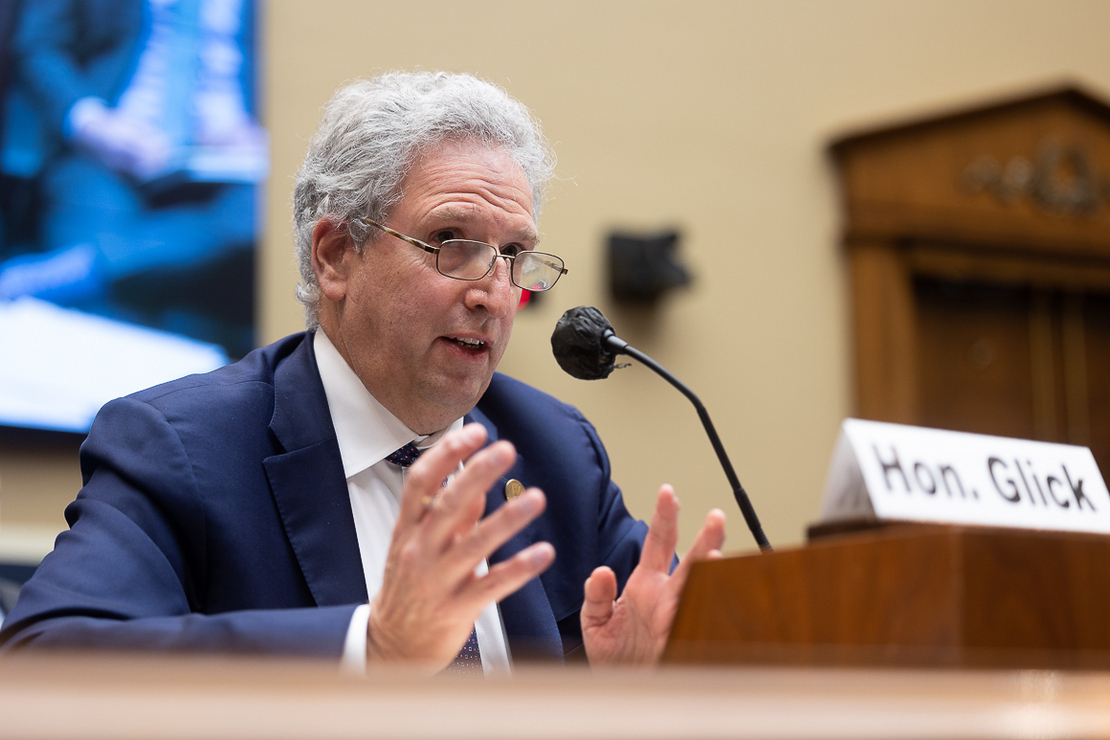 The head of the Federal Energy Regulatory Commission has teed up an ambitious policy agenda for the next several years, with implications for renewable energy, carbon emissions and pipelines.

But FERC Chair Richard Glick’s plans face an uncertain fate, as he’ll need to win approval this year from the Senate — evenly split among Democrats and Republicans — to stay on at FERC for five more years. The outcome of that process is far from certain, analysts say.

“I think it’s way too hard today to predict what the outcome might be in a 50-50 Senate,” said Neil Chatterjee, a former Republican FERC commissioner and chair.

First appointed to FERC in 2017 by former President Donald Trump, Glick became head of the five-person commission shortly after President Joe Biden took office. Last week, the White House nominated the Democrat to serve another term in his current role.

Under Glick’s leadership, FERC has advanced a major rulemaking to reform how new power lines are planned and paid for, an initiative that could help reduce bottlenecks in the transmission system that are holding up renewable energy.

Glick has also sought to make the agency more responsive to people affected by its decisions, such as landowners in the path of natural gas pipelines, and to modernize the nation’s power markets, among other measures.

“He’s doing a lot on grid modernization and expansion, and I think he’s struck up a very good relationship with states,” said Rob Gramlich, founder and president of Grid Strategies LLC and a former economic adviser at FERC.

The chair of the Senate Energy and Natural Resources Committee rebuked Glick and the other Democratic commissioners in February over two proposed new gas policies, which FERC has since drawn back (Energywire, March 25). The committee votes on FERC nominees before they are considered by the full Senate.

“I suspect like so many things in the closely divided Senate, all eyes will be on Joe Manchin,” Tony Clark, a former Republican FERC commissioner who is now a senior adviser at Wilkinson Barker Knauer LLP, said in an email.

Manchin’s team declined to address how the senator will vote on Glick. As of now, he appears to be “more likely than not” to support Glick, while Republicans are unlikely to vote for him, ClearView Energy Partners LLC said in a research note this week.

In an interview, Sen. John Hickenlooper (D-Colo.), a member of the ENR Committee, said that Glick will have to convince Manchin that he can streamline FERC processes and support new pipeline infrastructure if he wants to get the chair’s vote.

“It can take 10 years to get a pipeline approved … if we’re going to get green hydrogen all over the country, we’ve got to go faster,” said Hickenlooper. “I think that’s why Manchin doesn’t like [Glick].”

“I was chair, and that’s usually how we did it,” said Wyden. “You probably want to ask Chairman Manchin, I’ve got about five or six things you might want to ask him.”

“I think Glick is one of the best regulators I’ve ever really known,” said Sen. Martin Heinrich (D-N.M.).

A former attorney and adviser for Democrats on ENR, Glick has long called on FERC to account for how its decisions may contribute to climate change.

In numerous dissenting opinions during the Trump administration, Glick argued that the commission was obligated under the National Environmental Policy Act to consider whether new gas pipelines and export terminals would result in significant greenhouse gas emissions.

Then, last December, the five-person commission got a Democratic majority for the first time in more than four years. That allowed FERC to advance two new broad policies — which the agency described as “guidelines” rather than hard rules — for natural gas projects. That included a first-ever threshold for determining the significance of project emissions, which passed despite objections of the two Republican commissioners (Energywire, Feb. 18).

The new policies faced pushback from the natural gas industry, with detractors arguing that the changes would raise energy prices and grind needed projects to a halt. The following month, FERC turned the proposals into “drafts,” a move praised by Manchin as a “course-correction.”

“I appreciate their willingness to address the significant concerns raised by many members of the Senate Energy and Natural Resources Committee,” Manchin said in a statement in March.

Although Glick continues to advocate for changes in FERC’s process for assessing and approving new gas projects, his tone has shifted in recent months. Since February, FERC has approved nine new natural gas projects.

At this month’s commission meeting, Glick said he wanted to improve FERC’s process for permitting pipelines, but in a way that is “legally durable” and with bipartisan support from the commission (Energywire, May 20).

“Really, the aim is to try to address this issue in a way so that we can follow what the courts have told us … and at the same time, pursue our responsibilities under the Natural Gas Act,” he said last week, referring to the federal law that dictates FERC’s oversight of natural gas infrastructure.

Meanwhile, Glick has championed other issues that have drawn the support of Republican Commissioner Mark Christie. One example is a proposed transmission rule issued in April that would give states a larger role in the process for building new power lines and require longer-term transmission planning that accounts for the changing energy resource mix.

Several FERC watchers said the proposal showed Glick’s ability to build consensus and get things done. Having Glick stay on board would help ensure the rule gets finalized and that other related grid reforms also move forward, they said.

“The chairman is focused on issues that are really core to making sure we achieve a transition to cleaner energy in the most reliable and cost-effective way,” said Jeff Dennis, managing director and general counsel at Advanced Energy Economy, a clean energy trade group.

Even so, some groups have raised concerns about the possibility of FERC reviving its natural gas policy changes. Power the Future, a nonprofit 501(c)4 that describes itself as “the voice of energy workers,” has started a petition to pressure Manchin to “keep FERC in line.”

“Chairman Glick has already proved he’s against American energy independence and every Senator should reject him,” Daniel Turner, founder and executive director for Power the Future, said in a press release.

In response to Glick’s renomination, the Electric Power Supply Association, which represents independent power producers, said the chair should demonstrate a commitment to ensuring energy remains reliable as he faces the Senate.

“Glick’s renomination comes at a time when FERC’s mission to ensure reliable, safe, secure and economically efficient energy for consumers has never been more important,” Todd Snitchler, the group’s president and CEO, said in a statement.

For his part, Glick declined to comment on the news of his renomination, per a FERC spokesperson. Christie and fellow Republican Commissioner James Danly — a vocal critic of many of Glick’s policies and positions — also declined to comment.

Some Republican FERC watchers have also praised him, despite their disagreements.

“I think Chairman Glick is a good person,” Anthony Pugliese, a former FERC chief of staff and senior White House adviser under Trump, who’s now a consultant, said in a text message. “We disagree on several very important policies, but [I] believe he is genuine.”

For now, it’s unclear when ENR will hold the vote. While Glick’s term expires at the end of June, he is allowed to stay on through the end of the year even if he fails to secure a second term.

That opens the door for a number of variables that could affect senators’ perceptions of FERC and Glick, including the possibility of electric reliability challenges this summer, said Chatterjee, the former FERC chair.

“A number of regions are projecting potential electricity shortfalls. What might that mean for the nation’s energy regulator if we have blackouts and brownouts throughout the country?” Chatterjee said.