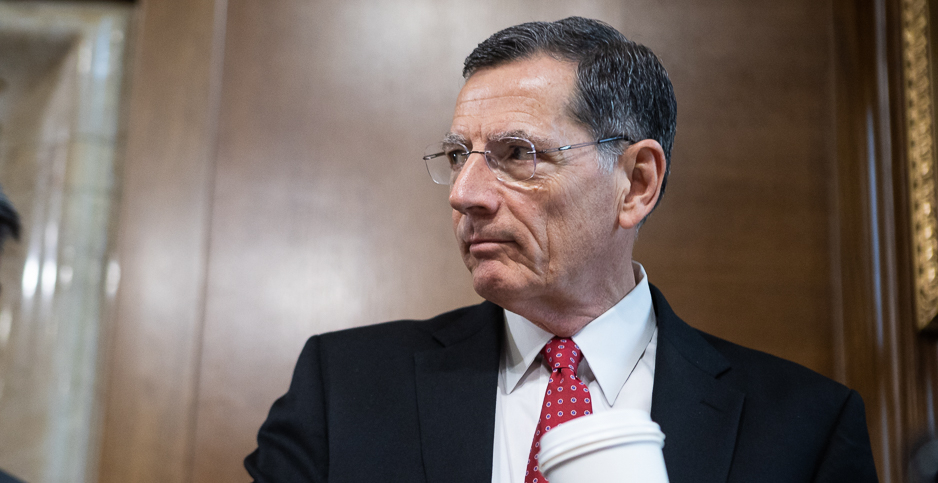 Wyoming Sen. John Barrasso and other Republicans are considering some measures to help the energy sector amid market instability. Francis Chung/E&E News

Top Senate Republicans are considering government purchases of crude and royalty relief for oil and gas producers as part of an upcoming stimulus package intended to counter the economic fallout from the novel coronavirus pandemic and other energy market woes.

"It’s under discussion," she said. "Exactly what may or may not come out of it remains to be seen."

Congress could appropriate funds to purchase crude, a provision that could be coupled with a mandate to sell the stocks at a later date when prices rise.

"Those are some of the things that we’re looking at right now," Murkowski told E&E News.

Environment and Public Works Chairman John Barrasso (R-Wyo.) confirmed the idea of an SPR purchase has been under discussion.

"A couple of us were just talking about if the oil prices are this low, isn’t this a good time to, to fill the SPR?" he said yesterday, noting Congress’ tendency in recent years to auction the reserve’s crude to pay for federal programs. "They take money from there, if you’re going to use that, it ought to be at a higher value."

Royalty relief and low-interest loans for oil and gas producers are also under consideration, although Murkowski cautioned that talks remain in an "early discussion phase."

President Trump addressed the country from the Oval Office last night announcing new measures his administration was undertaking to combat the disease.

Effective Friday, all travel from Europe will be restricted. Trump said he had told health insurance companies to waive coronavirus treatment charges and that he would be working on an emergency resolution to help workers who are affected by the illness. He also touted small-business loans.

"This is not a financial crisis. This is just a temporary moment of time that we will overcome together as a nation and as a world," Trump said.

In the Senate, enacting provisions to help the oil and gas sector is a heavy political lift, and GOP interest in doing so drew scorn from Democrats, including Rhode Island Sen. Sheldon Whitehouse.

Sen. Joe Manchin (D-W.Va.), the ranking member on the Energy and Natural Resources Committee, said yesterday he was more concerned about Americans forced to stay home from work because of the COVID-19 virus.

"We can’t control the oil price anyway, it’s going to be what it is," Manchin told reporters. "The oil industry has a better chance of surviving the downturn than the average person out there trying to survive."

Manchin’s predecessor as top Democrat on Energy, Maria Cantwell of Washington, said there may be some logic to refilling the SPR when oil is cheap but added, "That wouldn’t be high on my list of priorities" for economic stimulus.

Cantwell, whose home state has more coronavirus infections than any other, noted that firefighters in Washington who responded to an afflicted nursing home earlier this month face longer quarantines because testing labs have been overwhelmed.

"I think this is so dire right now for people to focus on getting the equipment and supplies and helping people with a health care delivery system," she said.

Some Republicans are wary of handing assistance to the oil and gas sector as well. Sen. Kevin Cramer (R-N.D.), whose state is a leading producer of crude oil, downplayed the idea of short-term relief for oil companies. The industry, he said, isn’t looking for a bailout, but it does want to stabilize prices.

"The problem becomes systemic. It’s not a short-term deal if this doesn’t get fixed really quickly," Cramer told reporters yesterday. "I’m open to anyone’s ideas, but I just don’t get the sense that a bailout is what they’re looking for."

Cramer added that he’s hoping to speak at some point with Harold Hamm, a Trump backer whose company, Continental Resources Inc., does business in the Bakken Shale in North Dakota.

But based on his conversations with producers, he said they’d rather see "some negotiation with Saudi Arabia and hopefully a restoration of some discipline so that they can get a good price."

"There’s nothing like a market," Cramer said. "There’s no safety net in the world better than a price."

Royalty relief could also present its own set of problems because so many states and institutions depend on that oil and gas money for revenue.

"Royalty relief concerns me," Cramer said. "I saw that and I thought, ‘I know a lot of people who wouldn’t do so well under royalty relief, and it’s not the oil companies.’"

The conservative Heritage Action for America yesterday also warned Congress against going overboard in its response to COVID-19, saying that an "epidemic tax credit" targeting stricken areas and workers would be an appropriate response.

"A broad stimulus package to prop up certain industries would be Washington at its worst — taking advantage of a public crisis to help private interests," Jessica Anderson, the group’s vice president, said in a statement.

"Congress should focus its efforts on limiting the spread of the virus and helping those most affected," she said. "That’s the only way to keep our country and our economy safe."

Major environmental groups, including Friends of the Earth, the Center for Biological Diversity and the Sierra Club, weighed in with congressional leaders as well yesterday, saying loans, SPR purchases and royalty relief should be off the table.

"The current bill for federal polluter subsidies is some $15 billion per year," they wrote. "For the sake of our climate and our communities, it is reprehensible to add to this considerable bill."

Murkowski acknowledged that legislating assistance to oil companies is a political challenge but called it unfair to single out a sector for exclusion.

"It’s one thing to say, ‘Cruise industry or airline industry, you’ve been impacted hard, let’s figure out a way to give direct assistance to you,’" she said. "Any energy sector might be viewed a little bit differently — it shouldn’t be. But I think that’s what you get caught up in, which is not fair."

Sen. Chuck Grassley (R-Iowa) — who has clashed with the oil industry over ethanol policies — bristled when asked yesterday about possible help for oil and gas companies in a stimulus.

But pressed on the point, he added, "I think the best answer is everything’s on the table."

The House is expected to go first today in passing the latest legislation to address the coronavirus before leaving for a weeklong recess.

The House proposal, released overnight, focuses on extending protections to workers impacted by the virus, ensuring affordable and accessible testing treatments for those with the disease, and putting in place new safeguards for the elderly and schoolchildren.

H.R. 6201 would not directly offer any aid for impacted industries, nor does it propose any broad tax breaks.

House Majority Leader Steny Hoyer (D-Md.) described the bill as focusing on "the economic issues of people who will be affected either directly because they get sick or because their businesses have shut down and they lose their jobs or schools are closed."

The Senate also could act quickly on the legislation this week. It’s not clear if it would attempt to alter it.

"Congress has already provided billions in new funding to federal, state and local health leaders. I hope we can bring the same bipartisan energy to any steps that prove necessary to support our strong U.S. economy," said Senate Majority Leader Mitch McConnell (R-Ky.), who signaled he could be open to bipartisan House legislation.

Neither the House nor the Senate seemed to have much appetite for pushing through a payroll tax cut that Trump called for again last night. Democrats especially see it as a non-starter.

While it’s not clear what bipartisan deal may emerge this week, there was wide support for one announcement yesterday — a move to suspend visitor tours of the Capitol through March.

Lawmakers had grown increasingly worried in recent days about the tens of thousands of out-of-town visitors to the building weekly and their potential for spreading the virus on Capitol Hill.