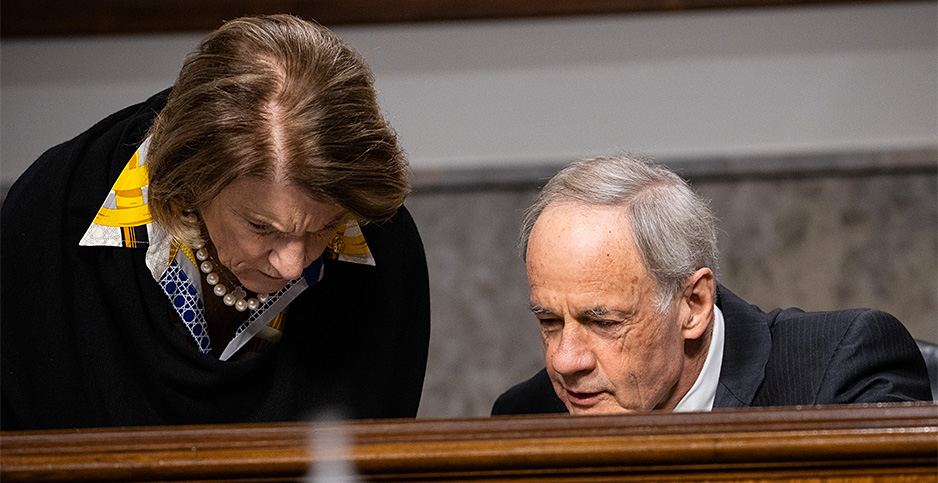 Key senators unveiled a bipartisan surface transportation bill this weekend that would fund electric vehicles, carbon capture programs, and roads and bridges — another milestone in the debate over infrastructure.

At the same time, the Biden administration lowered its top-line number on a broader package in a bid to entice Republicans, who continue to say that there remain "vast differences" between the two parties.

The action on infrastructure is intensifying ahead of a crucial Memorial Day marker, as the administration on Sunday touted its latest offer on the broader package — down from over $2.2 trillion to $1.7 trillion.

"I think the president coming down $550 billion off of his initial proposal … shows the willingness to negotiate in good faith and in a serious manner," Cedric Richmond, President Biden’s public engagement chief, said on CNN’s "State of the Union."

But such an offer doesn’t seem to be winning over even moderate Republicans. Maine Sen. Susan Collins, the top Republican on the Senate Appropriations subcommittee that deals with transportation, said there remain "fundamental differences" between Biden and the GOP on what the concept of infrastructure should encompass.

Collins repeated the Republican line that only "roads, bridges, seaports and airports, and broadband" should be included in a bill, and not "social programs."

"I think we’re still pretty far apart, but this is the test," she said. "This will determine whether or not we can work together in a bipartisan way on an important issue."

Some bipartisanship was on display in the Senate this weekend. Leaders in the Senate Environment and Public Works Committee, including Chairman Tom Carper (D-Del.) and top Republican Shelley Moore Capito of West Virginia, announced legislation that would fund $304 billion for highways and related infrastructure, an increase of a third over the 2015 Fixing America’s Surface Transportation Act, the last major highway bill reauthorization.

In a statement, Carper called the bill "a vital foundation for President Biden’s American Jobs Plan."

For her part, Capito called the bill "comprehensive," one that she said will help repair aging transportation systems but also build new transportation infrastructure. She said she’ll continue to work with Democrats to "develop a bipartisan solution to address our nation’s infrastructure challenges."

Among the provisions of the bipartisan bill, dubbed the "Surface Transportation Reauthorization Act of 2021," are $500 million per year for five years for electric vehicle and other alternative fuel infrastructure, new programs aimed at reducing carbon dioxide emissions from transportation, and new incentives for wildlife crossings.

The National Wildlife Federation cheered the draft, and its president and CEO, Collin O’Mara, said it "would make a strong down payment on some of the most important infrastructure challenges facing people and wildlife alike."

EPW plans to mark up the legislation Wednesday. The White House did not respond to a request for comment on the proposal.

The Biden administration’s offer Friday showed that it would be open to a smaller bipartisan package than its more than $2.2 trillion offer, a response to Republicans’ $568 billion competing infrastructure bill.

The new package shifts some proposed spending for research and development, supply chains, and manufacturing from the infrastructure negotiations into the discussions over the "Endless Frontier Act" — recently expanded and rechristened the "U.S. Innovation and Competition Act," which is currently on the Senate floor — and a separate bill intended to boost domestic manufacturing of semiconductors (see related story).

The White House also lowered its initial request for broadband to match the $65 billion figure included in Senate Republicans’ infrastructure plan offered to Biden last month, while also reducing spending for roads, bridges and "major projects" to close the gap with the GOP plan.

The new proposal is a "reasonable counteroffer," White House press secretary Jen Psaki told reporters, saying it is part of "the art … of seeking common ground."

"This proposal exhibits a willingness to come down in size, giving on some areas that are important to the president — otherwise, they wouldn’t be in the proposal — while also staying firm in areas that are most vital to rebuilding our infrastructure and industries of the future, making our workforce and our country more competitive with China," she added.

Yesterday, Richmond challenged Republicans to give ground to the administration, saying that "the real question is whether the Republicans will meet the effort that the president is showing."

"He came down on two areas, infrastructure and broadband, both areas that are important to him," Richmond said. "But it’s a sincere effort to move this country forward."

But Capito echoed Collins in shooting down the Biden proposal, calling it "well above the range of what can pass Congress with bipartisan support."

"There continue to be vast differences between the White House and Senate Republicans when it comes to the definition of infrastructure, the magnitude of proposed spending, and how to pay for it," she said.

The White House reiterated during Friday’s meeting that Biden sees the GOP push to pay for infrastructure through user fees as violating his campaign pledge not to reduce taxes, including through raising the gas tax.

The administration is also not budging from its position that companies and the richest Americans should pay for Biden’s sweeping infrastructure proposals.

In addition to the EPW highway bill meeting Wednesday, the Senate Finance Committee is due to meet this week on a clean energy tax overhaul proposal, another aspect of what could go into a broad infrastructure bill.

A Finance aide said Friday that a chairman’s mark of the clean energy tax overhaul, S. 1298, sponsored by Chairman Ron Wyden, will be released today in advance of the markup meeting.

Wyden last week noted the historic nature of the pending markup. "As far as I can tell, it’s the first time the Finance Committee has ever done anything like this," he told E&E News. "They have a comprehensive effort to overhaul federal policy with respect to energy taxes and the connection to climate change."

He noted similarities between his own proposal — backed by 30 members of the 50-member Democratic Caucus — and draft legislation offered by Finance ranking member Mike Crapo (R-Idaho).

Crapo’s plan "is quite a bit like what I’ve been talking about — tech neutral and focused on innovation," Wyden said.

The anticipated markups come ahead of the Memorial Day recess, which the administration and many Democrats have cast as a marker for demonstrating progress in the talks with Republicans.

EPW member Ben Cardin (D-Md.) said last week that bipartisan passage of the highway bill through the committee before the break would mark progress.

"If we can get an outline of a transportation bill done through EPW, I think it would be a major accomplishment," Cardin told E&E News last week.

"There was almost a jubilation in the Senate that day," Carper said last week. "And people said, ‘Let’s do that again.’ And what our leadership is saying, what the administration is saying, is another way to better ensure that we do it again and again and again is for us to take advantage of what’s right in front of us, surface transportation, and try to replicate the success we had in the water, and that’s what we’re going to try to do."

Pressed on measuring progress last week, Psaki pointed to the ongoing talks with Republicans. "Here’s what’s progress: We have Democrats and Republicans, the ranking members of a range of important committees in the Senate, having discussions with members of our senior White House team, a Democratic administration, about an agreement that we need to invest in our nation’s infrastructure," she said Thursday.

But Democrats and environmentalists are growing increasingly impatient with the quest for bipartisanship. Dozens of House Democrats from across the political spectrum last week penned a letter urging House Speaker Nancy Pelosi (D-Calif.) and Senate Majority Leader Chuck Schumer (D-N.Y.) to "go big, bold, and fast" on infrastructure.

"While bipartisan support is welcome, the pursuit of Republican votes cannot come at the expense of limiting the scope of popular investments," wrote the group of nearly 60 lawmakers, led by Congressional Progressive Caucus Chairwoman Pramila Jayapal (D-Wash.) and Rep. Jimmy Panetta (D-Calif.).

"We note that widespread climate denial among Republican lawmakers poses a threat to the bold, necessary action on climate that President Biden and Congressional Democrats have long championed."

The Democrats called for Biden’s twin infrastructure proposals — which total nearly $7 trillion — to "be enacted as rapidly as possible, preferably as a single, ambitious package combining physical and social investments hand in hand."

"Let’s not mince words: This is a demonstrable failure of a political strategy," said Sunrise press secretary Ellen Sciales.

"The American Jobs Plan was designed to tackle the interlocking crises of climate change, environmental racism, and the economic fallout of the COVID-19 pandemic with bold investments to create millions of good jobs in the clean energy economy," he said. "Abandoning it for a counter-offer that addresses none of these challenges would be a disastrous mistake."

"New Mexico has a combination of outstanding attributes that make it uniquely suited to serve as the powerhouse of the nation’s emerging clean hydrogen economy, which is already attracting significant attention and investments from industry," wrote Sens. Martin Heinrich and Ben Ray Luján, along with Rep. Teresa Leger Fernández, to Energy Secretary Jennifer Granholm.

Schedule: The Senate Environment and Public Works markup is Wednesday, May 26, at 9:45 a.m. in 301 Russell and via webcast.