Senate near deal to boost spending 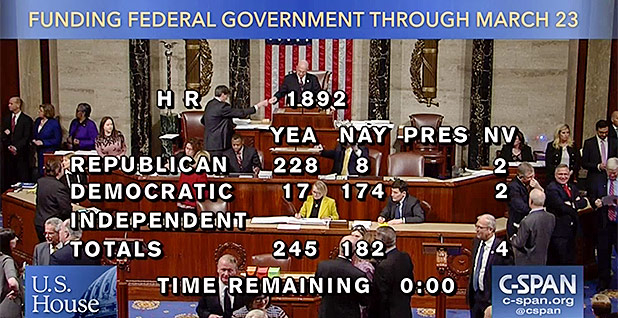 Momentum is building for a bipartisan budget deal in the Senate that would increase domestic and defense spending by hundreds of billions of dollars over the next two years and avert a federal shutdown this week.

He added, "I don’t think that’s going to happen" when asked whether agencies would have to close this week without new funding.

Senate Minority Leader Chuck Schumer (D-N.Y.) was equally optimistic, saying a meeting with McConnell had gone well yesterday and predicted legislation that would raise both defense and domestic spending.

"We’re making real progress on a spending deal that would increase the caps for both military and middle-class priorities on the domestic side," Schumer told reporters.

He conceded there were a few "outstanding issues" but declined to outline them and instead stressed the "good progress."

The Senate’s plan would call for amending a bill the House approved yesterday that would only provide fresh funding for the Defense Department for fiscal 2018 and keep all other agencies operating at current levels through March 23.

As soon as today, the Senate could swap out the language in the House bill with a budget cap accord and then immediately send it back to the House for final approval.

If that legislative strategy plays out, it would avoid a government shutdown tomorrow when current federal dollars expire.

Several lawmakers said the potential deal would provide increased spending for the next two years with an additional $80 billion dollars going to defense annually and around $60 billion to domestic agencies annually.

Appropriators would decide precisely how to dole out those dollars in a fiscal 2018 omnibus spending package that would likely be assembled by late March.

The legislation would need to include a provision to avert a shutdown by temporarily extending current funding until sometime in the later part of March when the omnibus could be finalized.

It would be the fifth, and likely final, continuing resolution Congress would need to pass for fiscal 2018 before new funding is approved.

Leaders were also weighing the possibility of attaching an increase to the nation’s roughly $20 trillion debt ceiling to the bill.

The borrowing limit will have to be raised in March and addressing it as part of the budget could avoid what otherwise would be a highly partisan fight over the nation’s fiscal needs next month.

"This would be a good time to solve a lot of problems. … I think the debt ceiling could certainly be part of a caps deal," said Sen. Roy Blunt (R-Mo.).

An emergency spending disaster aid package for states and territories devastated by hurricanes and wildfires may also make its way into the legislation. The House already passed an $81 billion aid measure in December, which the Senate has yet to take up.

Another possibility is that a host of expiring tax provisions, known as extenders, could be attached to the legislation to help build bipartisan support (see related story).

Even if the Senate can forge a compromise, its fate is not yet certain in the House, where many Republicans have pushed for increased military spending but are holding the line on other outlays.

"I think they’ll be a whole bunch of Freedom Caucus members who won’t vote for it," said Rep. Jim Jordan (R-Ohio), a leader of the group of roughly three dozen conservatives who have managed to scuttle other spending deals. Jordan said he was concerned about increased spending for both the military and defense.

Several House Republican appropriators signaled they would support the agreement. "Sounds like a good deal to me," said Rep. Mike Simpson (R-Idaho), a senior appropriator. He said any pact would likely require some Democratic support to become law.

It’s not yet clear how many House Democrats might be needed and Democratic leaders have yet to offer their support. It’s also not yet clear House Republican leaders would want to rely on the minority.

President Trump threw up another potential obstacle to a deal yesterday by suggesting in unscripted remarks that he’d only support a proposal that addressed immigration policies, and he opened the door to a shutdown.

"I’d love to see a shutdown if we don’t get this stuff taken care of," Trump said at a White House event focused on crimes allegedly caused by immigrants. "If we have to shut it down because the Democrats don’t want safety … let’s shut it down."

A White House spokesman later played down those comments, saying immigration changes did not have to be part of a broad budget deal.

Lawmakers, meanwhile, grappled with long-term changes to the budget process at a hearing yesterday held by the Senate Homeland Security and Governmental Affairs Subcommittee on Federal Spending Oversight and Emergency Management.

Sen. Rand Paul (R-Ky.), chairman of the subcommittee, and Sen. Gary Peters (D-Mich.), ranking member on the panel, both lamented that Congress has only managed to enact all 12 appropriation bills on time in four of the last 40 years, passing an average of four CRs a year.

"Though Congress designed a clear budget process in the 1974 Congressional Budget Act to establish our own funding priorities and set a timeline for enacting them into law, we have failed time and again to live up to our own standards," Peters said.

Maya MacGuineas, president of the Committee for a Responsible Federal Budget, criticized CRs as adding to the national debt. She said the current CR, approved last month, added $31 billion to the debt.

"And it now appears that we are on the verge of a new budget deal that — rumors have it — adds about $300 to $400 billion to the debt. It’s as though the issues of deficit and debt have just kind of disappeared, and because they’re these must-pass bills, there’s always an opportunity to tack more things on," she added.